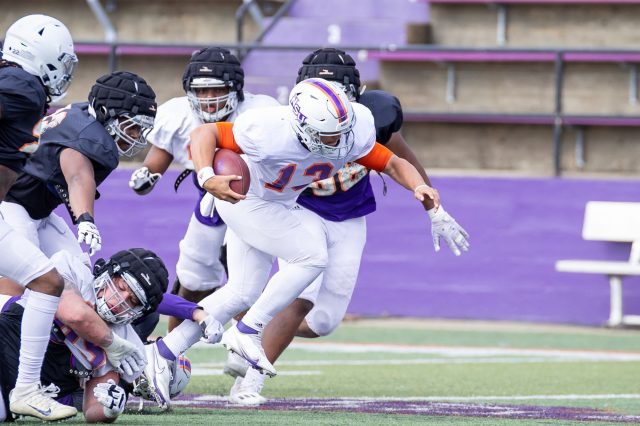 NATCHITOCHES – If Saturday’s first spring football scrimmage had halves, the offense would have hung its hat on the first half while the defense stiffened in the second half.

The offense scored five of its six touchdowns in the scrimmage’s first half before the defense dominated the second half, forcing all five of its turnovers in the latter stages.

NSU coach Brad Laird, who is beginning his fifth season as the Demons head coach, said he saw plenty of positives from the nearly 90-play scrimmage.

“The first scrimmage was good, especially with it being the first time we’ve had officials out here,” Laird said. “The offense came ready to play right out of the gate, and the defense settled down after that and we had good competition, which is what the spring is supposed to be about.

“We ended up (five) turnovers – three interceptions and two fumbles, which is good to see that from the defense but also means that your offense needs to protect the ball better.”

Antonio won’t be throwing his hat into the quarterback race, but the junior said the offense is in a strong position under first-year coordinator Cody Crill.

“Today was fantastic, and everything is coming together as an offense with the new coaches,” said Antonio, who was an All-Southland Conference receiver in the 2021 spring season before having to sit out this past fall. “Everything is clicking right now, and we’re getting better every single day.

We’ve had a powerhouse defense in the past, and now I feel like the offense is matching that.”

Both of Antonio’s receiving touchdowns came from the arm of Zachary Clement as Antonio hauled in scores of 61 and 20 yards.

Antonio’s touchdown pass also involved Clement, who caught a 20-yard touchdown that included juking a defender near the goal line.

Clement finished 9-15 passing for 143 yards and three touchdowns with one interception. He was also the scrimmage’s leading rusher with 33 yards on three attempts.

The sophomore quarterback started the scrimmage with an 18-yard touchdown to junior college transfer Zach Patterson, who totaled three catches for 33 yards.

Quarterbacks Kaleb Fletcher and Kareame Cotton each threw a touchdown and an interception.

Fletcher chunked a 48-yard strike to tight end Stanley King before finishing the drive with a 3-yard touchdown to King.

Carver had a game-high 94 yards on two catches with Spencer Heard grabbing a team-high five passes for 54 yards.

“We’re looking great, and we’re working in the new system,” said Valsin, who broke up one pass and logged two quarterback hurries and would have likely scored a touchdown on a fumble recovery had turnovers not been blown dead. “Coach Glaser puts us in the right position to make plays, and the new coaches are coming together well.

“We emphasize turnovers and making plays to get the offense back the ball. I feel like we’re picking up and adjusting to the new system with no hiccups.”

JaBralen Yarber was a standout on the defensive line, securing a sack and a tackle for loss among his three stops.

Yarber was also flagged for targeting in the scrimmage, one of 12 NSU penalties.

“We’ve got to clean up penalties, but I think we’ll be good in those situations,” Laird said.

NSU has one more week of spring practice, which culminates in the Joe Delaney Bowl on Saturday at 11 a.m. in Turpin Stadium.