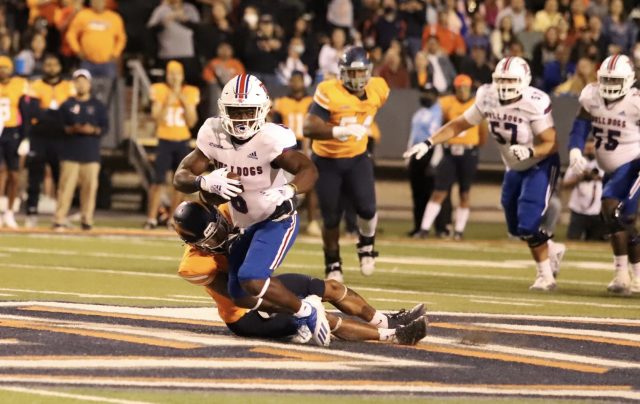 EL PASO, Texas – Turnovers, penalties and missed opportunities in the red zone proved costly for Louisiana Tech as they fell to UTEP, 19-3, on Saturday night at Sun Bowl Stadium.

The first conference loss of the season for LA Tech (2-4, 1-1- C-USA) came as a result of three turnovers, two failed fourth down conversions and six penalties.  Perhaps the biggest reason for the loss though was the offense scoring only once on five red zone trips (came into the game scoring on 15 of 16).

After allowing touchdowns on the first two possessions by UTEP (6-1, 3-0 C-USA), the LA Tech defense settled in and did what they needed to do to keep the Bulldogs in the ball game.

They ended up forcing four turnovers themselves – three fumbles and an interception; however, the offense was only able to generate three points as a result.

Down 14-0, the first forced fumble came from Brodrick Calhoun, but the ensuing drive ended in Jacob Barnes missing only his second field goal attempt of the season that came from 40 yards away.

Barnes redeemed himself after a nine-play, 56-yard drive that began as a result of the second forced fumble, this one by Jaiden Cole, to make it a 16-3 deficit with 6:56 to go in the second quarter.

That would be the score at halftime, and the Miners were threatening to extend their lead midway through the third quarter before Cole came up big again.  He intercepted Gavin Hardison at the one-yard line to keep the ‘Dogs within two scores.

Following his INT return of 28 yards, LA Tech drove down into UTEP territory, but were stopped on fourth and one for the second time in the contest.

Not scoring on the fourth forced turnover was toughest one of all.  Down 19-3 with still 13:28 to play in the game, the Bulldogs recovered a fumble forced by DJ Jackson at the 5-yard line.  However, a personal foul and a holding penalty pushed the team back before Austin Kendall threw an interception near the right side line.

LA Tech had two more chances to put points on the board after that, but both drives ended in interceptions as well.

“It was probably one of our worst performances offensively we have had in a long time.  We struggled.  We had a hard time getting anything going.  Defensively, I thought the front seven played really well.  But offensively, it was a poor effort.  I give UTEP an awful lot of credit, but we have to do a better job as an offensive staff to put our players in a better position.  It was a night where a lot of things did not go our way.”

·        This was the first time since 2016 that LA Tech lost its opening conference road game (had won four straight).

·        LA Tech forced four turnovers for the second time in a single game this season.  They now have forced 12 total turnovers through six games this season.

·        Marcus Williams, Jr. anchored the Bulldogs on rushing yards (42) and receiving yards (59).  He came into the game with a total of 55 receiving yards this season.  Fifty of those came on one reception, which was a career long for the senior.

·        Trey Baldwin registered a game-high 12 tackles, a new season-high for the senior linebacker.

·        Cesar Barajas recorded a season-long 71-yard punt.  It was only the eighth time in program history LA Tech has had a punt of 70+ yards.

It will be Homecoming for LA Tech as they play host to undefeated UTSA on Saturday, Oct. 23.  Kickoff is set for 6 p.m. and will be broadcast live on Stadium.