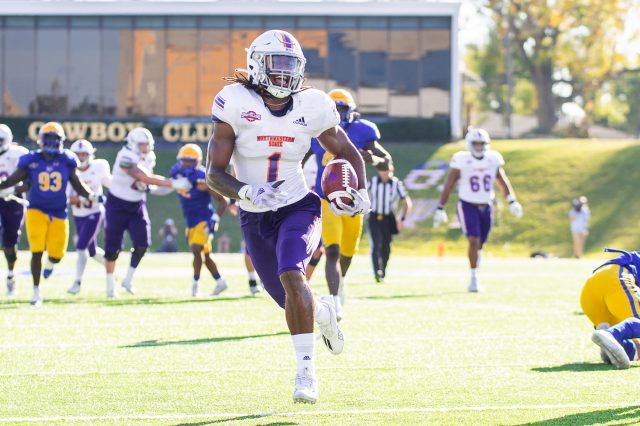 LAKE CHARLES – Appropriately enough, it was No. 1 who ended another longstanding Northwestern State drought involving McNeese.

Sixth-year senior receiver Kendrick Price Jr. hauled in two touchdown catches in his final game, including the decisive 29-yarder in the fourth quarter, as the Demons emerged from Cowboy Stadium with a 24-20 Southland Conference victory – NSU’s first win in Lake Charles since 1988.

“Last time we beat them it was Jazz (Ferguson’s winning touchdown catch), so that makes it special,” said Price, who finished his career with 11 touchdown catches, tied with Al Phillips for eighth in school history. “Quan Shorts texted me last night and said, ‘You’re going to score two touchdowns tomorrow. I can feel it.’ Crazy enough it happened. I haven’t scored two touchdowns in a game since 2019.

“It was the 1 connection, I guess. It made it happen. It’s super special.”

Price’s touchdown grabs bookended the scoring for Northwestern State (3-8, 3-5), which got the fast start it sought for much of the season.

NSU entered Saturday’s game having scored 17 points in the first quarter in its first 10 games this season. The Demons needed 14:35 of game time to do that Saturday.

Price started the scoring with a 7-yard grab that answered Deonta McMahon’s 39-yard touchdown run on McNeese’s opening drive. After Scotty Roblow’s 25-yard field goal broke the early 7-all tie, Zachary Clement and Jay Griffin IV connected on a 56-yard wheel route to build the lead to 17-7 with 35 seconds left in the first half.

“We knew we have not been able to get out to a fast start the last couple of weeks,” fourth-year head coach Brad Laird said. “That was one of our keys to victory. We were able to do that. To me, what’s so special about this team is that second and third quarter, when it wasn’t as easy, our guys stayed with it.”

Armed with a 10-point lead, the Demons missed a couple of chances in the first half to extend the lead, failing to score after starting with possession at the McNeese 29 and the McNeese 36.

Thankfully for the Demons, the Purple Swarm defense lived up to its name and then some.

Linebacker Jared Pedraza recorded four of Northwestern State’s 11 sacks on the day as the Demons fell one sack shy of tying the school single-game record. Pedraza fell a half sack shy of equaling the individual single-game school mark.

“I think we were just hungry,” Pedraza said. “The season didn’t go as we planned. We wanted to send the seniors out with a bang. We stayed assignment sound and made a play when it was presented.”

Pedraza was one of three Demons to record multiple sacks, joining junior defensive end Isaiah Longino and senior linebacker Kyle Moore, who each had two.

The sack party continued in the third quarter as Pedraza and Longino each ended McNeese drives in Northwestern State territory with sacks of McNeese quarterback Cody Orgeron.

Pedraza continued to terrorize Orgeron in the fourth quarter, ending the Cowboys’ first drive of the final quarter with a sack once the Cowboys reached the NSU 37.

“What a night by those guys,” Laird said. “I thought defensively, after the first drive of the game, did a great job composing ourselves and playing our type of football. You saw that by getting pressure on the quarterback and getting sacks. Credit to the guys up front and the linebackers, but also the guys in the back end in coverage.”

Northwestern State’s offense, which outgained McNeese 168-93 in the first quarter, followed Pedraza’s sack with its longest drive in terms of plays and yards – and arguably importance.

Buoyed by a 32-yard throwback tight end screen to Javonis Isaac on a third and 10 at the NSU 20, the Demons covered 80 yards in nine plays, culminating in Price’s 29-yard score that started with a slant pattern and ended with Price racing to the end zone.

“They’re a heavy man team,” Price said. “We have routes set up to beat that. It was a critical situation. We made a good call. I was where I supposed to be. Zach gave me a good ball. I was fortunate enough to break a tackle and make a play. It was just preparation and execution and it came to fruition.”

Prior to Saturday’s win, NSU’s most recent victory in Lake Charles was a 25-20 decision Oct. 8, 1988, that ended with the Demons running out the clock on offense.

It happened the same way Saturday afternoon after McNeese (4-7, 3-5) overcame two more sacks on a 15-play, 77-yard drive that ended with Josh Parker’s 2-yard touchdown run to cut the lead to 24-20.

Taking over at its 32 with 4:07 to play, Northwestern State turned to running back Curtis Williams and Clement to grind out the win.

Williams rushed for 22 yards and Clement added a 3-yard rush to convert a third down with 1:30 to play, cementing the Demons’ victory.

“Everybody on both sidelines and in the stands knew we were going to run the football,” Laird said. “After we got the first down with Gavin (Landry), they were out of the timeouts. That’s when you appreciate the (offensive line). They knew we had to run the football, and we were still able to get the first down. Credit the offensive line. Credit Curtis Williams. Credit this football team for being able to finish the game.”