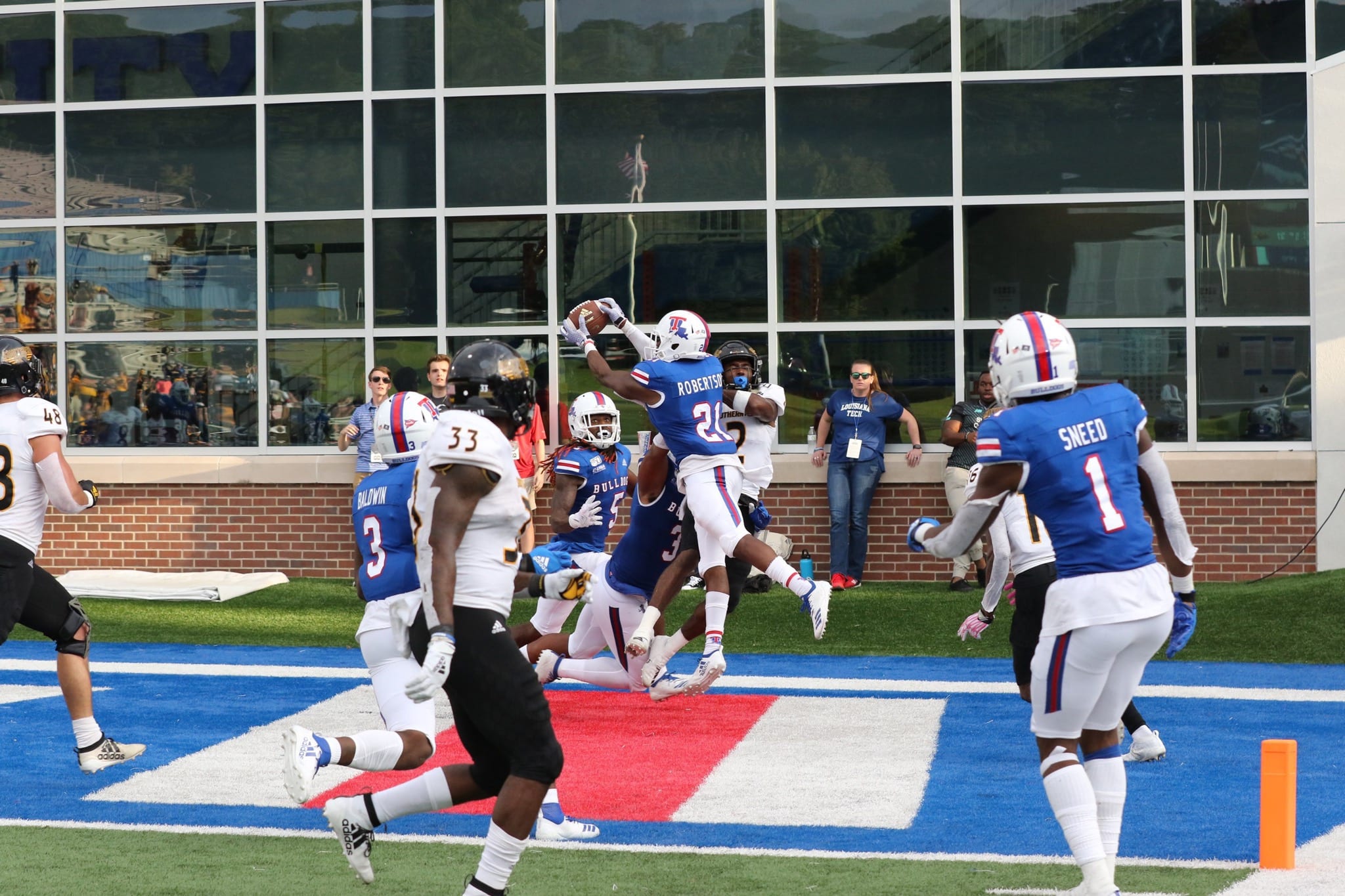 The Network – along with a national audience – got a preview of what’s coming to the next level in two years.

The junior Tech cornerback picked off three Jack Abraham passes and added two more pass break ups to lead Tech (6-1, 3-0 C-USA) to the key Conference USA victory over the Golden Eagles (4-3, 2-1 C-USA) in a match-up of the only two undefeated teams in league play.

In the postgame press conference following the contest, Robertson was asked what his favorite play of the night was. His answer was poetic.

Robertson’s first interception came on the first play of the second quarter, setting up a 30-yard TD run by Justin Henderson that tied the game at 14-14. Southern Miss had jumped out to an early 14-0 lead, returning the opening kickoff 100 yards for a score and adding a 15-yard Abraham to Ray Ladner pass in the first nine minutes of play.

However, it was Robertson’s second interception of the game that changed the complexion of the outcome. With Tech leading 31-27 following a one-yard J’Mar Smith TD run on a fourth down and goal play early in the fourth quarter, Southern Miss drove 70 yards in less than three minutes, setting up a first and goal from the Tech 2-yard line.

Following a three-yard loss on first down on a tackle for loss by Ka’Derrion Mason, Abraham rolled right and lofted a pass towards the near corner of the endzone. Robertson came off of his receiver, and plucked the would-be TD pass from the air, ending the threat by the Golden Eagles.

The Bulldog offense responded quickly. Smith connected with Griffin Hebert for a 70-yard pass the first play following the interception and five plays later, Bobby Holly scored on a one-yard plunge, upping the Tech lead to 38-27.

Following a first down play that moved the ball out to the 34, Abraham’s pass over the middle was intercepted by Ezekiel Barnett and returned 30-yards for a score. Bailey Hale’s extra point made the score 45-30.

Robertson put the final nail in the proverbial coffin as he picked off Abraham for the fourth time of the night – his third – with 1:08 to play, sealing the victory.

Robertson’s three interceptions are the third most in a single game in Tech history. John Causey (vs UT-Arlington on Oct. 7, 1972) and Joseph Thigpen (vs. Northwestern State on Oct. 28, 1933) both intercepted four passes in a game and hold the Tech record. He is the 12th player in C-USA history with at least three interceptions in a game.

Smith picked apart the Southern Miss secondary, passing for 325 yards and one score on just 14 completions – averaging 23.2 yards per completion and 15.5 yards per attempt.

Malik Stanley was Smith’s top target on the night, hauling in eight receptions for a career-high 21 yards and one score. Stanley becomes the 14th different Bulldog to ever eclipse the 200-yard receiving plateau in a game, the first since Trent Taylor accomplished the feat in the win over Navy in the Armed Forces Bowl in 2016.

Henderson upped his TD total to 10 on the season, rushing for 111 yards and two scores.

Tech returns to action next Saturday when the Bulldogs travel to face UTEP at the Sun Bowl.