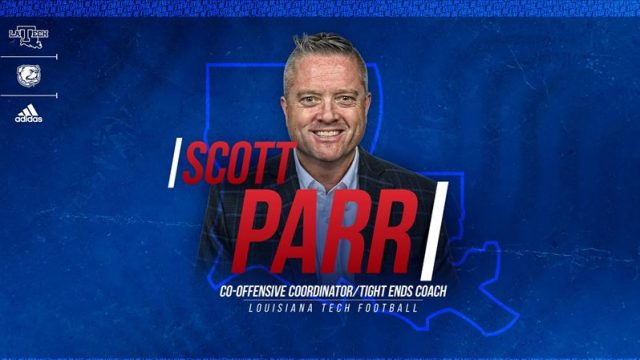 Parr is coming to Ruston after spending the past three seasons as the head coach at Navarro College where he led the program to a conference title while earning the Conference Coach of the Year award.

“Scott Parr has orchestrated high-powered offenses his entire career,” said Cumbie. “His passion for kids and offensive football is unmatched. The son of a legendary high school coach, football is in his blood. We look forward to having Scott and his family at Louisiana Tech for many successful seasons.”

Parr has more than 20 years coaching on the collegiate level, including 10 as offensive coordinator developing offenses that routinely averaged more than 40 points, 500 yards, and 345 passing yards per game.

During the past three years at Navarro, the Plainview, Texas, native led the program to the 2019 Southwest Junior College Conference Championship while earning the SWJCFC Coach of the Year award. The team finished among the nation’s top eight teams statistically in 11 categories, including first in total offense (5.415), passing yardage (4,037), per-game yardage (492.3) and touchdown passes (34).

While serving as the OC at Navarro, the program’s offensive units ranked among the NJCAA’s Top 10 in yardage and scoring (2015-17).  Navarro quarterbacks led the NJCAA in passing and per game average four years.

In 2018 at EIU, Parr’s offense ranked 22nd in FCS total and ninth in passing as the Panthers had five 500-yard-plus total offense performances and six 40-plus point efforts. Parr’s influence resulted in the fifth-best passing yardage season in EIU history.

Impressive offensive numbers aren’t new to Parr whose family has deep Texas Panhandle high school football coaching roots. His father, Steve, was a head coach for a combined 31 years at Slaton, Plainview and Amarillo Palo Duro High Schools. His brother, Seth, has been a head coach 12 years – first, at Amarillo Caprock, and, most recently, at Lubbock Coronado.