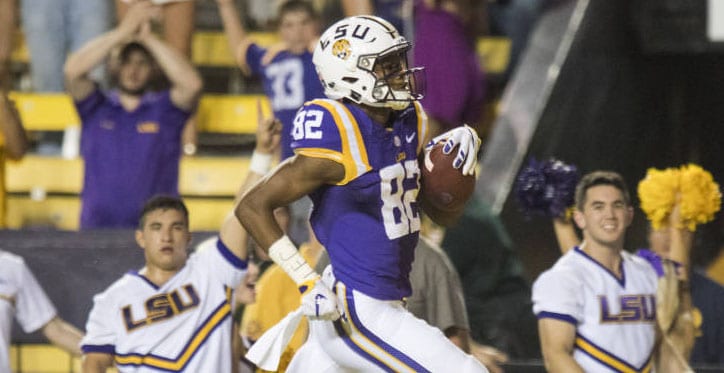 BATON ROUGE — LSU had five touchdown drives of three plays or less, as the quick-strike Tigers shook off an unexpected week of rust to defeat Southern Miss, 45-10, on Saturday in Tiger Stadium.

LSU quarterback Danny Etling connected on touchdown passes of 80 and 63 yards, while running back Derrius Guice had touchdown runs of 61 and 20 yards in a 28-point third-quarter outburst that ended the Eagles’ upset bid.

The Tigers extended a non-conference winning streak to 47 games in Tiger Stadium.

Etling completed 11-of-18 passes for a season-high 276 yards with three touchdowns and his first interception in 104 pass attempts. Malachi Dupre caught two of the touchdows and finished with three catches for 100 yards, while D.J. Chark added 91 yards on three grabs with an 80-yard touchdown.

Guice, who moved over 1,000 career rushing yards, needed only 16 carries to gain 162 of LSU’s 182 net yards. He scored back-to-back touchdowns early in the third quarter.

“It was good. Believe me,” LSU coach Ed Orgeron said when asked what he said to his team at the half. “But it was no Vince Lombardi speech or nothing but I just challenged them, make a decision, man, we’ve got to go. But we knew we were going to face adversity.

“Hey, they came in here and punched us in the mouth. Let’s see what we’re going to do and our guys responded very well. I challenged them to play for 60 minutes.”

LSU was 5-of-9 on third downs. Entering the contest, Southern Miss ranked No. 4 nationally allowing only 14 third-down conversions in six games this season.

Defensively, the Tigers allowed only 81 rushing yards on 36 attempts. Linebacker Kendell Beckwith led the way with a career-best 15 tackles including two behind the line.

Southern Miss (4-3) took the opening kickoff and drove 75 yards to take a 7-0 lead with 6:58 remaining in the first quarter. Running back Ito Smith culminated the 15-play march with a two-yard touchdown burst to give USM the early advantage.

LSU tied the game at the 2:22 mark of the first quarter when wide receiver D.J. Chark dashed 19 yards for a TD on an end-around. The scoring drive, which covered 55 yards in three plays, featured a 25-yard completion from quarterback Danny Etling to tight end DeSean Smith to the USM 19.

USM went three-and-out on its next possession, as its third-down pass attempt was thwarted on a sack by outside linebacker Tashawn Bower, his first of the season and the second of his career.

Colby Delahoussaye’s 38-yard field goal, his fourth three-pointer of the season in six attempts, gave LSU a 10-7 lead with 14:05 left in the first half. The field goal capped a five-play, 36-yard drive for the Tigers.

USM kicker Parker Shaunfield tied the game with a 37-yard field goal at the 8:28 mark of the first half. The Golden Eagles drove 62 yards in 11 plays to knot the contest at 10-10.

The Tigers regained the lead on the first possession of the second half when running back Derrius Guice sprinted 61 yards for a score, capping a three-play, 70-yard march. The touchdown marked a career-long rush for Guice, a sophomore from Baton Rouge.

LSU safety Jamal Adams recovered a USM fumble on the ensuing possession at the Golden Eagle 22, and Guice increased the advantage to 24-10 on a 20-yard TD run with 10:50 left in the third quarter.

Etling hit Chark on an 80-yard TD connection with 4:20 left in the third quarter, giving LSU a 31-10 lead. The touchdown was the longest of Etling’s LSU career and tied his collegiate career high, as he also threw an 80-yard TD pass while playing for Purdue against Indiana in 2013.

Etling went deep again at the 1:58 mark of third quarter, connecting with Malachi Dupre on a 63-yard TD aerial. The reception was a career-long for Dupre, a junior from New Orleans, and his first touchdown of the season. LSU led 38-10.

Another terrific 23-yard touchdown grab by Dupre in the back of the endzone capped LSU’s scoring late in the fourth quarter. Etling was 4-for-4 on the drive for 61 yards.