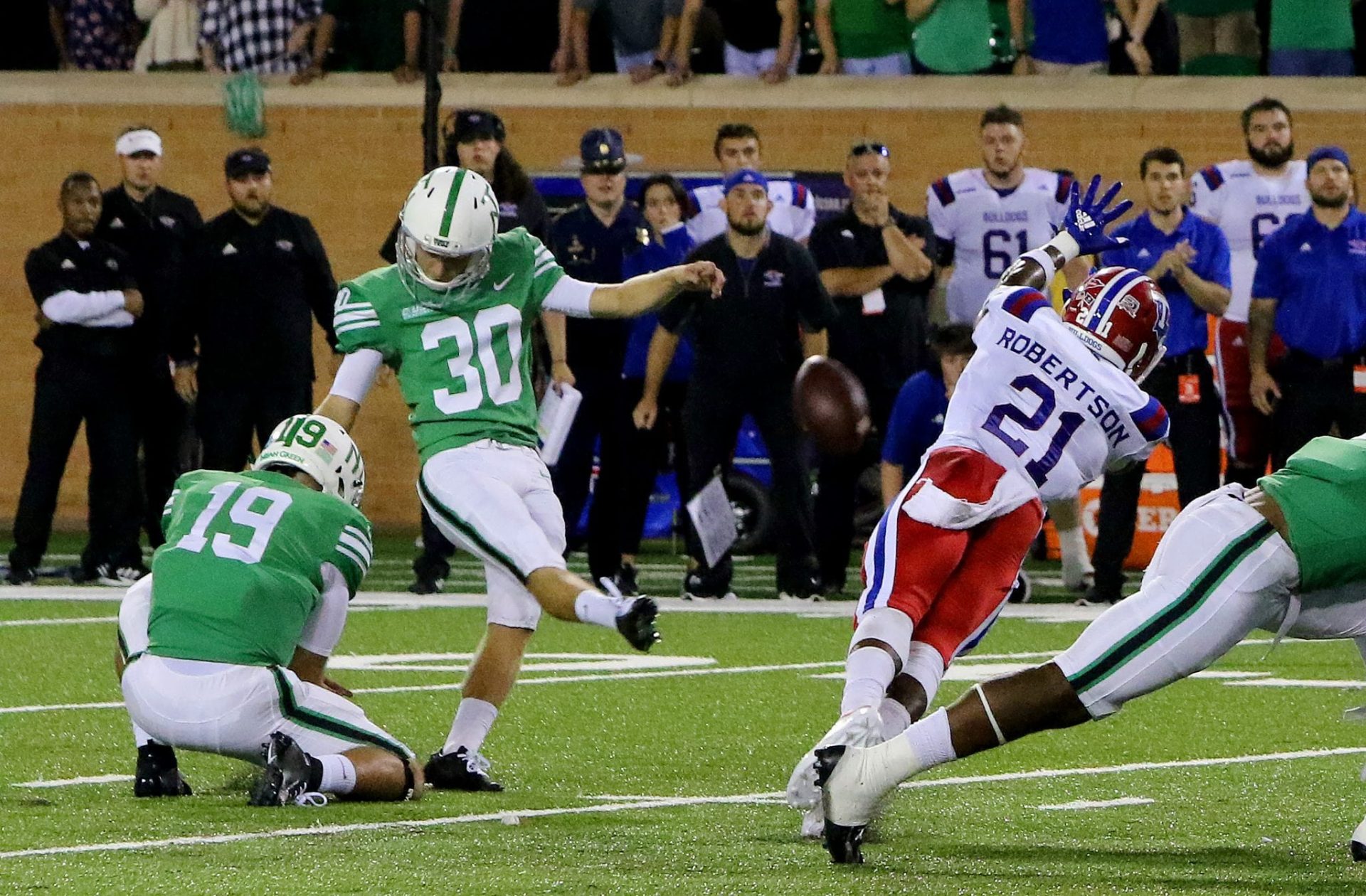 DENTON, Texas — On a night where North Texas celebrated Mean Joe Greene, one of the greatest defensive ends to ever play the game, it was Louisiana Tech’s Jaylon Ferguson who stole the show.

Down 21-6 after the first quarter of play, Ferguson and the Louisiana Tech defense stymied a potent North Texas offense the rest of the way to lead the Bulldogs to a thrilling 29-27 victory over the Mean Green on Saturday night in front of the largest crowd in North Texas history.

Ferguson had a career night terrorizing North Texas quarterback Mason Fine as the nation’s active career leader in sacks posted four of his own, which ties for second-most in Louisiana Tech history.

It was the largest comeback by a Bulldog team since Tech came back and defeated Nevada in 2011. For the first time this season, North Texas was held scoreless in both the second and fourth quarters, while the win snapped a 9-game home winning streak for the Mean Green, who had not lost at Apogee Stadium since the Bulldogs came to town in 2016 and walked away with a road win.

“This was a huge win for us,” head coach Skip Holtz. “It was a hard-fought game and we were fortunate to come out on top. This was a great college environment. This was not the prettiest game for either team. Both teams made mistakes, but neither team flinched. This is what college football is all about. Last year, we missed a field and North Texas won, 24-23. This year, we blocked a field goal and win, 29-27. This is a great rivalry. I have great respect for Coach [Seth] Littrell and what he has done here. Mason Fine is as good a quarterback as there is. North Texas is a very talented team.”

Following a 21-point first quarter by Mason Fine and the North Texas offense, Louisiana Tech’s defense played shutdown football the rest of the way, allowing the Bulldog offense and kicker Bailey Hale time to put up 23 unanswered points, including 20 in the second quarter alone to enter halftime with a 26-21 lead.

Defense set the standard for both teams in the second half. Tech tacked on a field goal in the third, while Mason Fine led another scoring drive for North Texas at the end of the third, but a missed 2-point conversion, which kept it a 29-27 game in favor of Tech before both teams battled through a scoreless fourth quarter.

With two minutes remaining in the fourth, North Texas drove 57 yards down the field before kicker Cole Hedlund trotted out to attempt at 46-yard field goal that was blocked and recovered by Amik Robertson to ice the game for the Bulldogs with 33 seconds left in regulation.

It was a bleak first quarter for the Bulldogs, who watched North Texas put up 222 yards of total offense and three touchdowns compared to a pair of field goals by Bailey Hale for LA Tech to a big lead early on.

Hale was a perfect 5-for-5 on fields goals on Saturday night, tying a Louisiana Tech record for most in a game, while also connecting on a season-long 42-yard field goal in the third quarter to make it a 29-21 lead for Tech.

The Bulldogs scored their first touchdown of the game with just over four minutes to go in the second quarter after J’Mar Smith led Tech on an 8-play, 80-yard scoring drive, capped off by an 8-yard touchdown pass to Adrian Hardy to cut the North Texas lead to 21-16. On LA Tech’s next offensive possession, the Bulldogs quickly got into field-goal range thanks to an impressive leaping catch by Rhashid Bonnette which led to another Hale field goal to make it a two-point game.

Tech scored for the fourth time in the second quarter with 32 seconds remaining after North Texas muffed a Bulldog punt that was recovered by Alex Zayed at the 5-yard line. From there, J’Mar Smith connected with Alfred Smith for a 5-yard touchdown pass and gave LA Tech its first lead of the night, a 26-21 advantage at halftime. It marked the first time all season that North Texas has trailed in a game.

In addition to Ferguson’s four sacks, he had six total tackles and two quarterback hurries. Collin Scott led the Bulldogs with 11 total tackles (5 solo, 6 assists), including 2.5 tackles for loss.

“Jaylon (Ferguson) was all over the place tonight,” Holtz remarked. “He’s a guy who was projected as a third of fourth round draft pick a year ago and came back angry – with something to prove. He had an unbelievable camp, he has not missed a single practice rep and it’s showing with the way he’s been playing on the field. He’s been getting better and better. I’m just really proud of him. I’m glad he’s on our side, because he can get after the quarterback with the best of them. I can’t say enough about his attitude, leadership work ethic and the way he’s been leading by example. When your hardest workers are your best players, you’ve got a chance to be a pretty good team. That’s exactly what Jaylon Ferguson brings to Louisiana Tech.”

Offensively, J’Mar Smith was 20-for-39 passing for 230 and two touchdowns, while Bonnette had five catches for 101 yards and Hardy had seven catches for 75 yards and a touchdown. Israel Tucker ran the ball 15 times for 95 yards, while Kam McKnight had 34 rushing yards on the night.

The Bulldogs will host UAB on Saturday 6 p.m. at Joe Aillet Stadium in Ruston. Tickets can be purchased by calling 318-257-3631 or logging onto LATechSports.com/tickets.