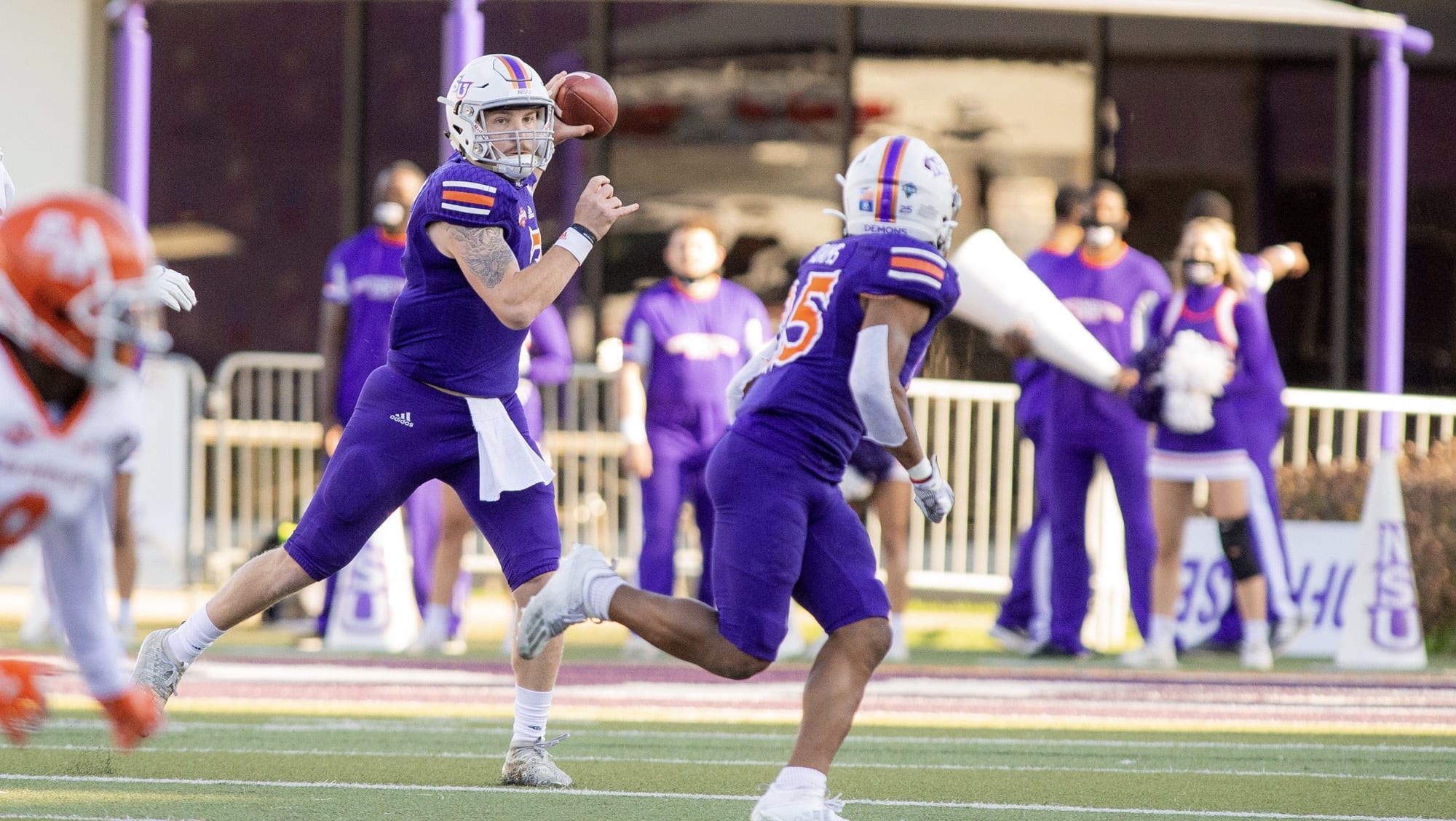 NATCHITOCHES – Northwestern State’s defense dug in its heels to hold No. 5 Sam Houston to more than 30 points below its season average Thursday and quarterback Bryce Rivers became just the second Demon to throw for 400 yards.

But NSU couldn’t cash in enough opportunities as the Demons fell to the Bearkats, 24-16, in the home finale.

“The scoreboard wasn’t on our side at the end, but I told them after the game that I’ve never been more proud of a bunch as I was tonight,” said NSU coach Brad Laird, whose Demons played on four days of preparation compared to SHSU’s 12 days of preparation.

“The situation we were in on a short week playing the No. 5 team in the nation, to watch our guys respond and how they prepared throughout the week.

“We had the opening turnover (fumble), and they scored early. But we made each play count, not only today but all week to get this point.”

In his first NSU start, Rivers threw for 410 yards on 29-of-51 passing with two touchdowns. It’s the first game this spring in which just one NSU quarterback took snaps.

The junior kept NSU’s hopes alive late with a 7-yard touchdown strike to Javon Antonio with 21 seconds remaining, creating an onside kick opportunity down by one score for the second straight week.

But the Bearkats jumped on Eddie Godina’s kick and kneeled out the clock.

Rivers threw for 273 of his 410 yards in the second half as the NSU passing game ramped up after halftime.

“I felt pretty good, but there was a couple things I missed and that we can clean up. “But it came from practice – everybody came out and executed and wanted to work.

“The exciting part is there is a lot to clean up, and we can make those improvements and get a lot better.”

Senior linebacker Kyle Moore intercepted a pass at the beginning of the fourth quarter that set up NSU’s first touchdown.

Rivers connected with Marquise Bridges on a 20-yard pass on the next play, cutting SHSU’s advantage to 21-9.

His 190 yards is a career-high and is the ninth-best output in NSU history, the most since 2015 (Ed Eagan’s 212 receiving yards vs. Abilene Christian).

Bridges also went over the century mark, accounting for 103 yards on seven receptions. It’s the first time NSU has had two 100-yard receivers this season and the first time since Akile Davis and Quan Shorts each had 155 against Nicholls in 2019.

“Javon and Marquise buy in every day, and it feels like they’ve been here forever because of how hard they work and knowing what they need to execute,” Rivers said.

The defense kept NSU within reach throughout the game as the Bearkats traveled into NSU territory nine times with 24 points allowed.

Given that SHSU averaged nearly 59 points through its first three games, including dumping 71 points on a ranked Nicholls squad, the Demons say they can build off the performance.

“We had a good game plan from defensive coordinator Mike Lucas, and we came and put effort in,” said junior linebacker Jomard Valsin, who led NSU with 11 tackles along with Jared Pedraza. “Unfortunately we didn’t get the outcome we wanted, but we felt good about how we played tonight.

“Those types of stops are energy boosters, and they uplift the team. If we keep doing that, we’ll have a bright future.

Outside of Moore’s interception that directly led to an NSU score, NSU turned Sam Houston two times early inside the 25-yard line to keep Bearkats from running away.

Valsin forced a sack fumble on fourth down before William Hooper blocked a field goal to halt another SHSU drive.

The Bearkats did take advantage of its next opportunity in NSU territory with an Ife Adeyi 19-yard catch from Eric Schmid for a two-touchdown edge.

Receiver Cody Chrest caught a 28-yard touchdown from Schmid for a 7-0 edge on their first possession.

NSU got on the board at the end of first half with an Eddie Godina 35-yard field goal to close to 14-3 before SHSU scored first in the third quarter for a 21-3 lead.

The Demons outgained SHSU 453-439 despite rushing for just 43 yards.

Schmid threw for 312 yards on 22-of-41 with two interceptions (Moore and P.J. Herrington).