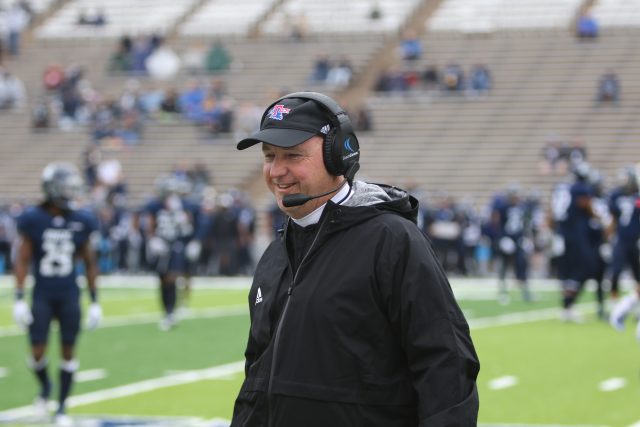 HOUSTON  – For the seventh time this season, a Louisiana Tech football game was decided by a single possession as the Bulldogs lost to Rice, 35-31, in its season finale on Saturday.

LA Tech (3-9, 2-6 C-USA) took an early 10-0 lead after a 20-yard field goal by redshirt freshman kicker/punter Jacob Barnes and a 44-yard touchdown reception from freshman quarterback JD Head to freshman wide receiver Tre Harris. Rice (4-8, 3-5 C-USA) scored a pair of touchdowns to take the 14-10 lead at the half.

Rice trimmed the lead to 31-28 with just over four minutes to play. After forcing a three-and-out, the Owls returned a punt for 48 yards to the Tech 18 yard line where they went onto convert a touchdown for the 35-31 lead. Tech drove down the field to the Rice 33-yard line, but the Owls would intercept the ball to seal the victory.

QUOTABLES
Head coach Skip Holtz
“It was a very chirpy game. There was a lot of talking going on. It was a very physical game. Both teams played extremely hard. There wasn’t a bowl. There wasn’t a conference, so it’s playing for pride at the end of the year and both teams competed really hard. Unfortunately, we made a couple too many mistakes tonight to be able to overcome them to win.”