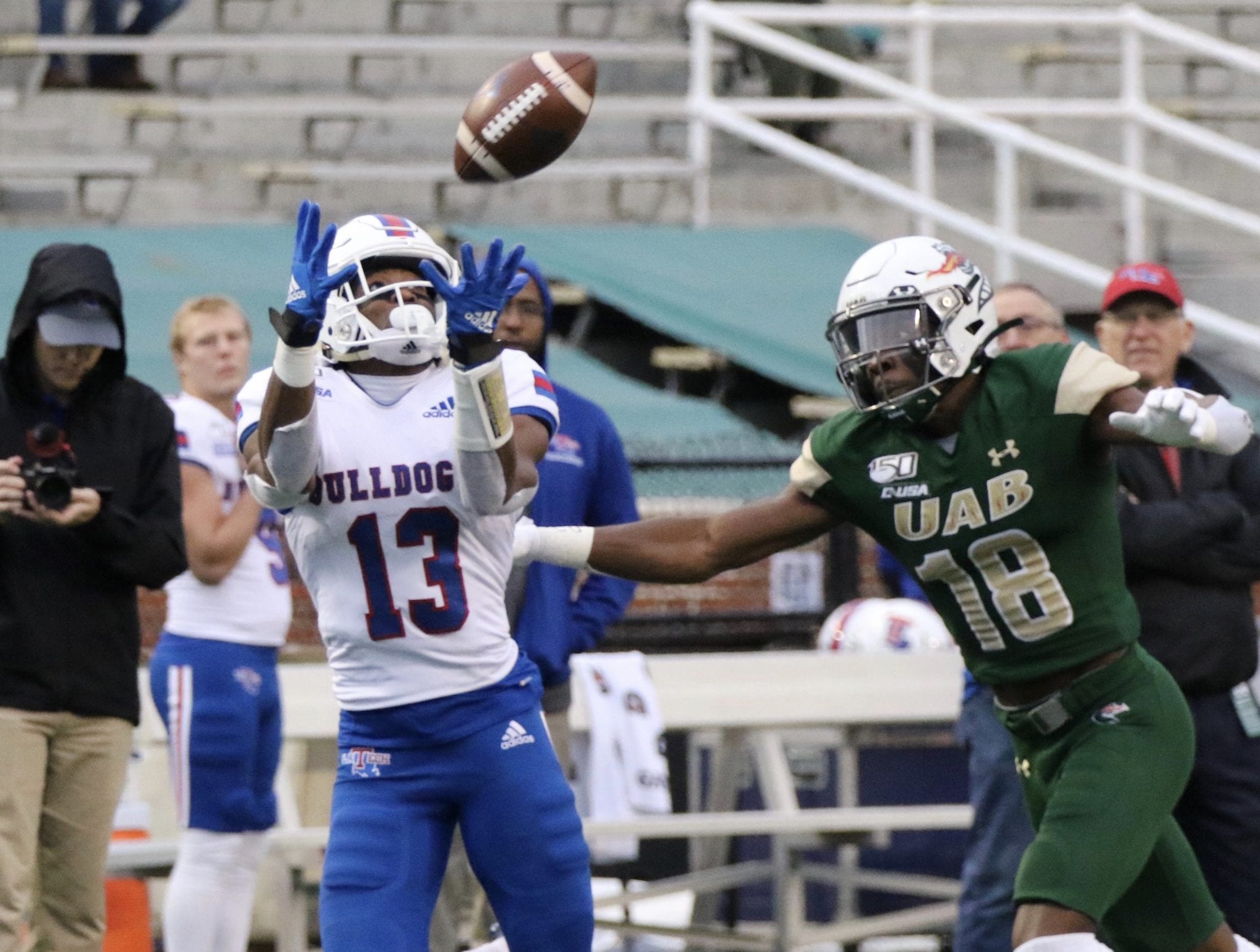 BIRMINGHAM, Ala. – The UAB Blazers scored 17 unanswered points in the second and third quarters before holding off a Louisiana Tech comeback attempt to defeat the Bulldogs 20-14 from Legion Field in front of 18,346.

“I’m proud of this team, I’m proud of the way they compete. It just hurts losing when you compete, you work so hard for something, and to come this close and not be able to get it done,” said Bulldog head coach Skip Holtz. “It was a hard fought game by both teams. I give UAB a lot of credit, thought they played hard and made a couple of plays they needed to make. We had our opportunities, even going down to the end.”

Tech nearly pulled off a fourth quarter comeback. L’Jarius Sneed picked off a pass in the end zone, and Aaron Allen marched the ‘Dogs 80 yards. The drive culminated in a five-yard touchdown pass to Smoke Harris.

The comeback wasn’t meant to be, however, as Tech couldn’t continue its offensive momentum after forcing a three-and-out. The ‘Dogs got the ball back at the 23-yard line with 2:20 left, but Allen’s deep ball to Israel Tucker was incomplete later resulting in a turnover on downs.

“There’s no quit in this team, they kept hanging in there and kept battling. It wasn’t always pretty but nobody hung their head, even down 20-7, it was like ‘we’re in a ballgame, we’re gonna get it back, we’re gonna go down the field, we’re gonna get a stop, we’re gonna get our chance again,” said Holtz. “Unfortunately we weren’t able to convert on a 3rd down over on their sideline and a 4th down on our sideline trying to throw a little underneath out route”.

The Blazers, aided by a 15-yard facemask penalty, marched down the field to open the game, but the Bulldog defense refused to break in the red zone. Michael Sam and Darryl Lewis came up with key tackles-for-loss on second and third down to force a UAB field goal.

Tech struck in the second quarter for its first score of the afternoon. Aaron Allen launched a picture-perfect pass to Isaiah Graham, who hauled it in and turned on the jets for a 46-yard touchdown, giving the Bulldogs a 7-3 lead with 9:15 remaining in the first half.

UAB responded on the next drive, going 57 yards in 7 plays, capped by a play-action touchdown pass to Gerrit Prince. After forcing the ‘Dogs to go three-and-out, the Blazers squeaked in a field goal before halftime to take a 13-7 lead into the break.

At halftime, the two offenses punted a total of eight times, and were a combined 3-of-15 on third-down conversions.

Tech’s opening drive of the second half looked promising, as running back Justin Henderson broke off runs of 23 and 17 yards, bringing the ‘Dogs into Blazer territory. However, Tech’s gamble on 4th and 2 was thwarted, as Israel Tucker was stopped at the line, giving the Blazers the ball.

UAB capitalized and put together one of its most sustainable drives of the day, covering 76 yards in 12 plays, while chewing up 6:45. UAB faced a 4th and 2, and lined up for a field goal try, but the snap was fumbled, and the home team converted as the holder Kyle Greenwell, miraculously found Hayden Pittman for a gain of two, extending the drive.

Darryl Lewis made a career-high 13 tackles, including one for a loss, for LA Tech. Courtney Wallace led the team with two tackles for loss.

The Bulldogs return home next weekend to close the regular season against UTSA. Kickoff in Joe Aillet Stadium is set for 2:30 p.m.