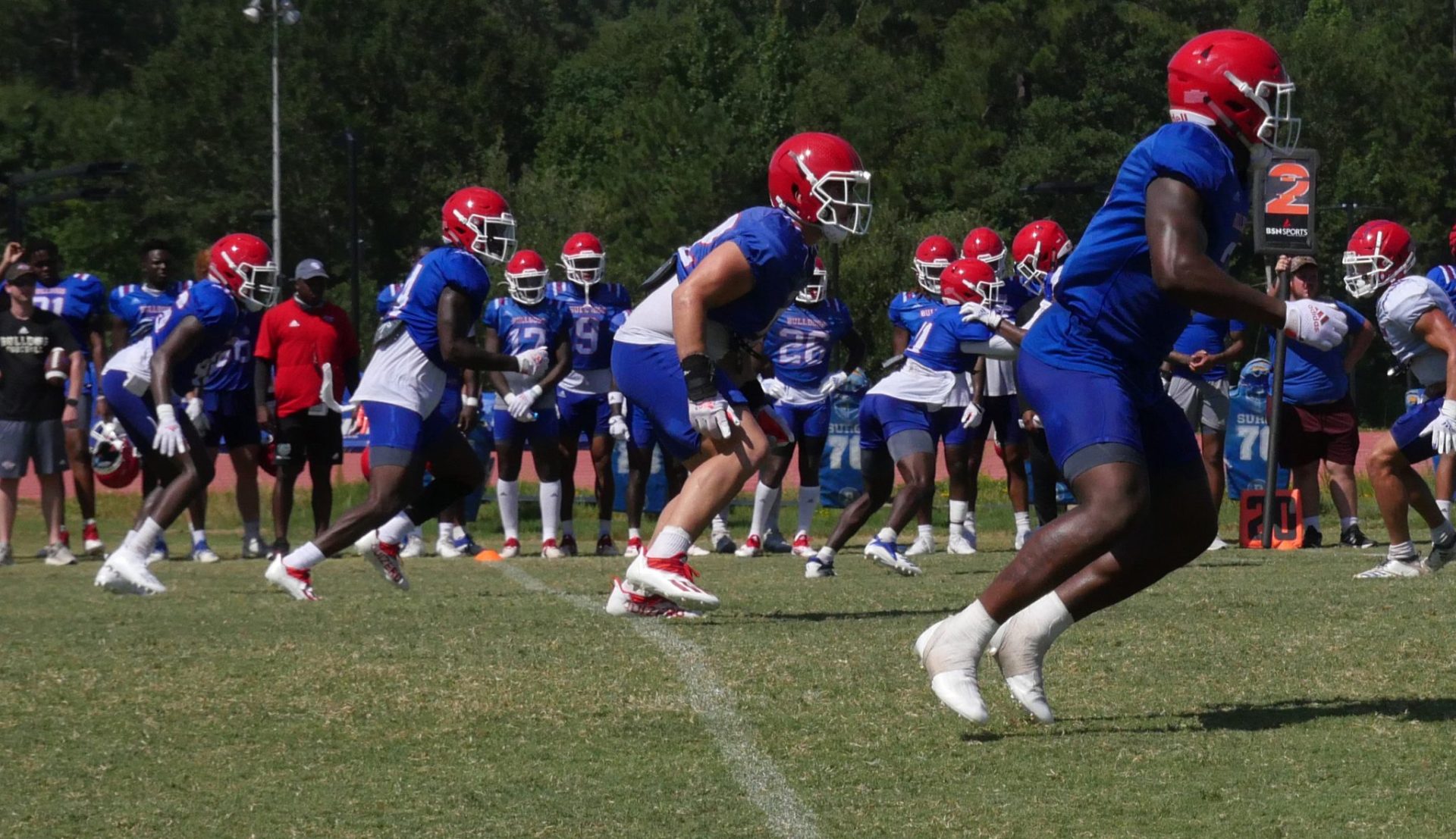 RUSTON — A year ago, fourth-string linebacker Tyler Grubbs’ number was called to make the start in Louisiana Tech’s season-opener against Southern Miss.

By the end of the season, he was a freshman All-American.

The whirlwind 2020 campaign showcased how important depth is for a football team, and the Louisiana Tech linebacker and wide receiver meeting rooms are full of Bulldogs competing for the top spots.

“We keep talking about depth and that’s the key,” head coach Skip Holtz said. “If there’s nothing else from what we learned a year ago with COVID out there, you better have depth on your football team because it could be Friday and we could lose our top three outside receivers or our top three inside receivers and you still need to be able to line up and go play.

“That’s been the big cry is leave nobody behind. This is about development from our freshmen to our sophomores to our juniors to all the transfers. We have to develop them all and we have to bring everyone. You never know who is going to have to play for you, so we’re just trying to get everybody ready.”

Holtz said the leadership from the linebackers has stuck out this fall camp.

Grubbs has been named to three preseason watch lists in the Chuck Bednarik Award, Bronko Nagurski Trophy and the Rotary Lombardi Award.

He had a breakthrough freshman campaign that earned him 2020 FWAA, ESPN and 247Sports.com Freshman All-American honors. As a true freshman, Grubbs was named first team All-Conference USA by both the league and Phil Steele while also earning a spot on the Conference USA All-Freshman team.

The New Orleans native registered a team-best 99 tackles and finished second on the team in both solo tackles (45) and tackles for loss (9.5) as a true freshman in 2020.

Grubbs opened the season with back-to-back double digit tackle performances with a career-high 16 tackles against Southern Miss on Sept. 19, and a 12-tackle outing against Houston Baptist on Sept. 26.

He ended the 2020 campaign with a career-high 12 solo tackles against Georgia Southern at the R+L Carriers New Orleans Bowl on Dec. 23. Grubbs finished the 2020 season ranked second in C-USA and 25th in the FBS in tackles per game at 9.9, and he was sixth in C-USA in tackles for loss with 9.5.

Baldwin was also named to the Rotary Lombardi Award Watch List along with the 2021 Conference USA Preseason Watch List. He was named second team All-C-USA and earned a spot on the Phil Steele All-Conference USA third team in 2020.

He ranked first in C-USA and 11th in the FBS in solo tackles with 5.9 per game and was third in the conference in tackles per game at 9.4. Baldwin also registered 7.0 tackles for loss, including 1.0 sacks, five pass breakups, one interception and one quarterback hurry during the 2020 campaign.

He finished fourth on the team with 49 total tackles. Barnett opened the 2020 campaign with a career-high 10 tackles, including four solo and 2.0 for loss, at Southern Miss on Sept. 19, and had a career-high-tying 10 tackles against UTEP on Oct. 10.

During the 2020 season, Barnett registered 33 solo tackles and 3.5 tackles for loss. He posted at least five stops in five of his nine games played in 2020. Barnett also returned two interceptions for 66 yards during the season, including a 60-yard pick-six at UTSA on Oct. 24.

“That’s three seasoned guys who have played an awful lot of football,” Holtz said. “Behind them, you have Kody Fulp who is really going to make a huge impact for our football team this year. Maki Carabin who has played a solid role.

“I’ve really been encouraged with Allen Walker. Allen Walker played defensive end in high school and we moved him back to linebacker. He redshirted his first year, came through and got a little bit of a taste of it last year on the field and he’s really responded and had a great offseason.

“Those five guys on the inside and then on the outside with Joren Dickey and Taz Marshall backing up Ezekiel Barnett, we have depth there. We have guys who have played a lot of football, guys who are ready to play and we’re not counting on guys who are true freshmen to come in and make an impact for us.

“When you look at the defense. The linebacker position is like the quarterback position on offense. It’s a position of leadership. You’re vocal. You’re making the call. You’re the guy that’s making the adjustments. I feel really good about where we are right now in the middle of our defense with our linebackers.”

The linebacker trio are joined in the meeting room by three other returning lettermen in junior Joren Dickey and redshirt freshmen Maki Carabin and Allen Walker.

“There is definitely a lot of competition and a lot of people working and coming together as a team,” Grubbs said. “We’re working on our individual goals and are making sure to keep pushing each other on and off the field and keeping each other accountable.

“Having everybody that came back from last year and just being in the system, we’ve come together well and are pushing each other very well.”

The linebacker group is not the only one with plenty of familiar faces returning this season as the wide receivers bring back 16 Bulldogs from the 2020 roster, including a pair of starters in senior Isaiah Graham and junior Griffin Hebert.

Graham appeared and started in nine games at wide receiver during the 2020 season where he registered 20 receptions for 225 yards and three touchdowns.

The Bastrop native had two touchdown receptions against Houston Baptist on Sept. 26. He had a season-high 44 receiving yards on three catches at TCU on Dec. 12. Graham also had eight kick returns for 111 yards during the campaign.

Hebert appeared in all 10 games, including eight starts, for the Bulldogs in the 2020 season. The Lafayette native registered 19 receptions for 275 yards and three touchdowns during the campaign.

He opened the season by catching a pair of touchdowns at Southern Miss, including the game-tying touchdown which, after the extra point, gave the Bulldogs the 31-30 win, on Sept. 19. Hebert had a season-high 66 receiving yards against Marshall on Oct. 17.

“You’ve got some experience coming back when you talk about Isaiah Graham who has played a lot of football here, Griffin Hebert is doing a great job, Smoke Harris who I really like what he’s bringing,” Holtz said. “Jawaun Johnson has been in this program for three years now and he’s really ready to make his contribution. He’s really having a good camp.

“Tre Harris is another guy that redshirted a year ago that really came on the scene this spring and had a great spring and showed what he’s capable of doing. When you start looking at Tre, Jawaun, Kyle Maxwell, Praise Okorie and Isaiah Graham, you’ve got five guys on the outside that have played some football for us. That have been out there. That this isn’t their rookie campaign.

“Inside, we talked about Griffin and Smoke, but Solomon Lewis, the freshman coming in, is making an impact. Tahj Magee is doing a good job. I really like what Carson Rieder and Ivan Thomas are doing. I like the way newcomer Ivan Thomas is catching the ball and the threat he’s posing. Then Jacob Adams is an inside fullback/halfback and is really doing a great job.”

“I’ve seen a couple flashy plays and people have improved in both their weaknesses and their strengths,” Harris said. “Everybody is improving. Nobody is taking a step back.”

“The receivers had a really good day today,” Holtz said. “They’re catching the ball really well and running good routes. They’re getting better and better. I like the way they’re feeding off each other and working with each other and competing against the defensive backs.”

Three-game mini plan tickets for the 2021 LA Tech football campaign are also on sale and available for purchase here, while the Family Five Pack can be purchased here.