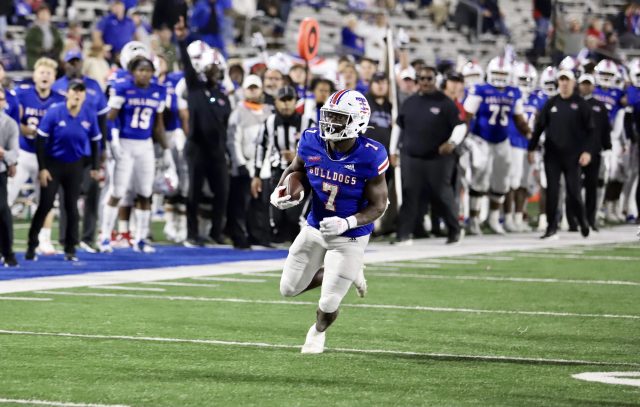 RUSTON – Louisiana Tech racked up a season-high 504 yards of total offense behind the arm of Aaron Allen and the legs of Marcus Williams, Jr. as the duo helped carry the Bulldogs to a 42-32 victory over Charlotte on Saturday afternoon at Joe Aillet Stadium.

Making just his second start of the season and the sixth of his career, Allen was poised behind center the entire day, completing 78 percent of his passes (21-27) while throwing for a career-high 324 yards and two touchdowns.

Meanwhile on the ground, Williams, Jr. was a workhorse with his career-high 29 carries for 131 yards and four rushing touchdowns.

It was the defense though that got LA Tech (3-7, 2-4 C-USA) off on the right foot as Khalil Ladler made a diving interception at the 2-yard line to stop Charlotte (5-5, 3-2 C-USA) in its tracks on their opening drive of the game.

Allen proceeded to lead the offense on a 16-play, 98-yard drive that ended in a 2-yard rushing TD for Williams, Jr.  The senior tacked on his second score, this one from eight yards out with 1:38 left in the second quarter to give the ‘Dogs a 14-7 lead that they took into halftime.

Coming into the game, the offense had struggled in the third quarter with only six total points in the stanza in the last six games combined.  That was not the case against the 49ers as they finished off two quick drives of 75 yards that each took about two minutes.

The first one was the opening drive of the third quarter that took only five plays to go 75 yards, setup by a 49-yard strike from Allen to Tre Harris and then capped off by Williams, Jr.’s third TD from six yards out.

LA Tech took its biggest lead at 28-10 on its following offensive drive, this one going 75 yards again but only taking four plays this time.  The end of it was Allen connecting with Isaiah Graham a post route down the middle for a 32-yard score.

Charlotte would find its offense late in the third, scoring three touchdowns the rest of the way.  However, the closest they would get was 35-25 early in the fourth when the Bulldogs answered with touchdowns of their own each time – Smoke Harris notched a 17-yard touchdown (one of his team-leading eight receptions) and Williams, Jr. put the exclamation point on the game with a 25-yard scamper for his fourth TD.

“The key to the game offensively was no turnovers and try to eliminate lost yardage plays.  I thought Aaron Allen was poised, took what the defense gave him and played a really good football game.  He has been patient, been a great teammate.  He certainly earned this and deserved this.  Marcus Williams, Jr. was a rock in the run game.  I thought the wide receivers made some great catches.  We were able to put a game plan together and were able to execute on offense.  We had some great efforts on defense too.  I am proud we were able to get the win.”

·        LA Tech snapped its five-game losing streak with the 42-32 win over Charlotte, which was the first ever meeting between the two programs.

·        The Bulldog offense put up a season-high 504 total yards and the second-most points of the season.

·        Making his second start of the season and the sixth of his career, Aaron Allen put up career numbers by going 21-of-27 for 324 passing yards and two touchdowns.

·        Marcus Williams, Jr. also had a career day on the ground, rushing the ball 29 times for 131 yards and four touchdowns.  He doubled his season total in rushing TDs, which was the most by a Bulldog in a single game since 2015 (Kenneth Dixon).  It was the first 100-rushing game for any Bulldog RB this season.

·        Smoke Harris led the Bulldogs in receptions (eight) and receiving yards (98) to go along with his fifth receiving touchdown of the season.  The wide receiver has led the team in receptions in all 10 games this season.

·        Trey Harris tied his career-high with five receptions for 91 receiving yards.  Three of those catches came on third down that resulted in a first down.

·        Khalil Ladler registered his first career interception, picking off the Charlotte quarterback at the 2-yard line.  Following the INT, the offense drove 98 yards in 16 plays to go up 7-0 early in the game.

LA Tech will play its final home game of the 2021 season on Friday, Nov. 19 when they host Southern Miss.  Kickoff is set for 7 p.m. and will be broadcast on CBS Sports Network.