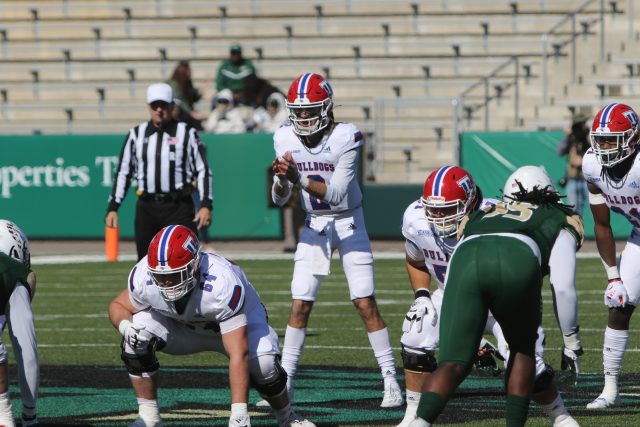 BIRMINGHAM, Ala. – Louisiana Tech scored three consecutive touchdowns to go up two scores early in the game, but the momentum completely flipped in favor of UAB who responded with 24 unanswered points to help propel them to a 52-38 win on Saturday afternoon at Protective Stadium.

The tying score started after an interception by Jaiden Cole and ended with Head finding Smoke Harris out in the flat who scampered into the end zone for a 5-yard touchdown.

The two connected again on the following drive, this time an 18-yard pass over the middle to go up 14-7 with 14:07 to go in the second quarter.  The lead grew to 21-7 as Greg Garner punched it in from 1-yard out, capitalizing on a muffed kickoff return by the Blazers.

LA Tech was poised to get the ball back after stopping UAB on a three-and-out, but the Blazers executed a fake punt to pick up the first down.  And from then on, the momentum was almost entirely on the side of the home team.

UAB scored 17 points the rest of the quarter to regain the lead at 24-21 at halftime.  And the scoring continued into the second half as the Blazers pounded the ball on the ground, anchored by DeWayne McBride who racked up 210 rushing yards and four touchdowns.

The Bulldogs found some late offense though, getting a 21-yard field goal from Jacob Barnes and a 5-yard rushing touchdown by Head, which ultimately cut the deficit down to 38-31 with still 6:45 to go in the game.

However, UAB quarterback Dylan Hopkins scrambled to pick up a 3rd-and-9.  Two plays later, McBride ripped off a 29-yard touchdown.  Fellow running back Lucious Stanley put the game out of reach less than two minutes later with a 38-yard rushing TD.

UAB outgained LA Tech, 477-346, with 295 of those yards coming on the ground.  Head finished with 20 completions for 196 passing yards and three scores (two through the air and one on the ground).  His favorite target, Smoke Harris, registered a career-high nine receptions for 92 yards and two touchdowns.

“I did not think we tackled very well in the first half, and it got worse in the second half.  The tackling was as bad as I’ve seen.  We talked the last week, the game was about stopping the run and running the ball.  We had a good rushing output, but we were not able to stop the run.  That ultimately was the difference in the game.”

·        Making his first career start (and fifth career appearance), JD Head was 20-35 for 196 yards and two touchdowns.  He now has three passing TDs on the season (recorded one versus North Texas).  He also tacked on his first career rushing touchdown.

·        Smoke Harris racked up nine catches for 92 receiving yards and two touchdowns.  The nine receptions and two scores were career highs for the wide receiver.

·        Smoke Harris has led the Bulldogs in receptions in all nine games this season.

·        Marcus Williams, Jr. anchored the Bulldogs on the ground with a season-high 18 carries for 80 rushing yards and one touchdown.  It is the seventh time this season he has been the team’s leading rusher.

·        After coming into the game with just 15 rushing attempts this season, Keyon Henry-Brooks had 12 carries for 47 yards.

·        The Bulldog Defense recorded a season-high four sacks (came into the game with just three total sacks over the previous four games).

·        Jaiden Cole notched his second career interception (had one at UTEP as well).

After consecutive road games, LA Tech returns home to Joe Aillet Stadium to face Charlotte on Saturday, Nov. 13.  Kickoff is set for 2:30 p.m. and will be broadcast on Stadium.