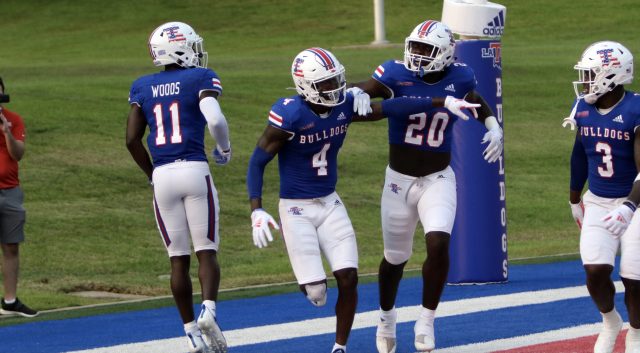 RUSTON – In a game that was full of offense, it was the Louisiana Tech defense that came up a big fumble recovery in the closing minutes to help seal a 45-42 shootout victory over Southeastern on Saturday night inside Joe Aillet Stadium.

It was defense that gave LA Tech (1-1) its first points of the game as BeeJay Williamson picked off Cole Kelley and ran it back for a 45-yard touchdown.  It was the second pick six of the season for the Bulldogs and the 15th since 2017, which leads the country.

Kelley, the FCS Walter Payton Award winner, fired back by leading his Lions (1-1) down the field to tie things up at 7-7 on the following drive.

It was a back-and-forth scoring affair from then on out (with very little punting).

The rest of the first-half scoring came on the ground with Greg Garner and Austin Kendall recording rushing touchdowns from four and two yards out, respectively, while SLU’s Taron Jones and Kelley each punched one in close to the goal line.

LA Tech took a 24-21 lead into the locker room though with its other score coming off the left foot of Jacob Barnes who drilled a 44-yard field goal.

The home team went up two scores early in the third quarter after a trick play resulted in a TD.  Austin Kendall threw behind the line of scrimmage to Kyle Maxwell who launched a 33-yard touchdown to Garner who absorbed a big hit in the end zone for six.

Kelley and the Lions quickly closed the gap about a minute later with a big play of their own, a 47-yard touchdown pass to get back to within three.

Garner followed with his third touchdown of the night, scoring from one yard out on the ground to make it 38-28 with 8:10 still to go in the third quarter.

SLU would not go away though.  They punched back with a nine-yard touchdown score, Kelley’s third through the air of the game, but LA Tech countered back as Kendall found Tre Harris who went up high for a 50-50 ball in the end zone and came down with the 21-yard TD.

Kelley’s second score on the ground with 4:22 to play got the Lions back to within three again, and after forcing a Bulldog punt with 80 seconds still to go, was in possession to drive down and either tie or take the lead.

However, the ‘Dogs defense stood tall as Ezekiel Barnett forced a fumble on a Kelley scramble that was picked up by Cedric Woods.  It was LA Tech’s third takeaway of the game, and its biggest one.

“Ultimately, you want to find a way to put one in the win column.  I thought there were plenty of mistakes we made that we definitely have to got cleaned up.  I felt like we started kind of doing our own stuff tonight.  Guys started pressing, trying to make something happen.  I cannot say enough about the offensive line and the running backs.  I thought the receivers made the plays we needed to.  I think Cole Kelley is really good.  We had way too many uncontested wide receivers.  They have been through a lot because of the hurricane.  I did not think defensively we played very well.  Right now, I am just excited we found a way to win the game.”

LA Tech returns to Joe Aillet Stadium on Saturday, Sept. 18 to take on SMU.  Kickoff is set for 2:30 p.m. and will be nationally-televised on CBS Sports Network.