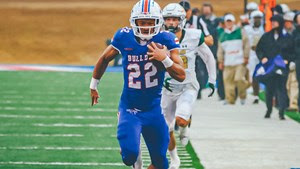 RUSTON – The Louisiana Tech football team concluded its season with a 37-27 loss in a steady downpour at Joe Aillet Stadium on Senior Day.

The Bulldogs eclipsed the century mark on the ground with 220 yards for the sixth consecutive game and eighth time this season. Redshirt sophomore running back Charvis Thornton had a career day rushing for 132 yards on eight carries for one touchdown. Thornton’s touchdown came on a 63-yard dash at the 9:39 mark in the third quarter.

The Blazer’s (6-6, 4-4 C-USA) two-back rushing attack of DeWayne McBride and Jermaine Brown Jr. proved to be the difference maker as they accounted for 391 of their 406 yards rushing and three touchdowns.

LA Tech (3-9, 2-6 C-USA) got on the board in the first half courtesy of true freshman kicker Buck Buchanan nailing a field goals from 46 and 49 yards.

After Buchanan’s first field goal, UAB answered back with a 29-yard touchdown dash from Jermaine Brown Jr. to take the lead, 7-3, with 9:17 left in the first quarter.

The Blazers then extended their lead with a blocked punt return for a touchdown and a 39-yard field goal to make it 17-3 in favor of the visitors.

Buchanan’s second field goal came as time expired in the second quarter to make it 17-6 heading into intermission.

McBride, the nation’s second-ranked rusher opened the second half scoring with a nine-yard rush to put UAB ahead 24-6.

Thornton gave Tech its first touchdown of the game at the 9:39 mark in the third quarter to make it 24-13 UAB, courtesy of his 63-yard run, which was the longest touchdown rush by a LA Tech player this season.

Brown Jr. then found the end zone again from 23 yards out to extend the UAB lead to 17 points.

Tech struck back when Jack Turnerconnected with Tre Harris for his first career passing touchdown on a 17-yard pass with 2:27 left in the third quarter to bring the Dogs within 10. Harris led the Dogs with 63 yards receiving and six receptions.

Turner was solid in his relief of Landry Lyddy, completing 15 of 25 passes for 167 yards while tossing a touchdown and interception.

“It was a challenge today for our team to see who could go out and play really hard and I think we had guys that did that. Unfortunately, we couldn’t get the win for the seniors as they head out and pursue their dreams whether that is the NFL or wherever their degrees take them. I am really proud of that group for what they have done and change is very hard especially for older players. They allowed us to come in here and earn their trust. I am very appreciative of everything they did here and before we got here.”