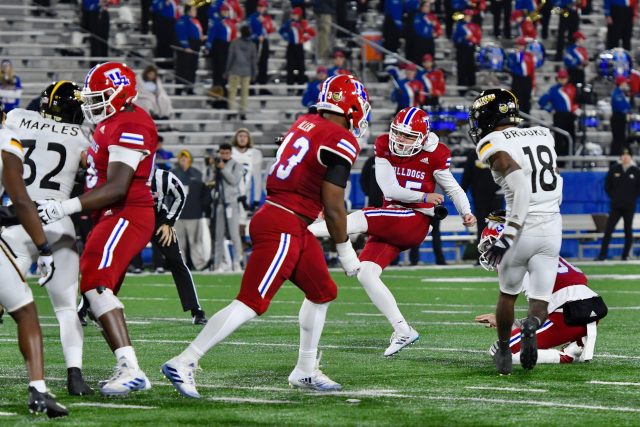 Things started off well for Louisiana Tech (3-8, 2-5 C-USA) as the Bulldog defense forced a turnover on the very first play of the Southern Miss (2-9, 1-6 C-USA) opening drive. Freshman linebacker Tyler Grubbs forced a fumble which senior linebacker Ezekiel Barnett recovered and returned for six yards to give the Bulldogs possession. Redshirt freshman kicker Jacob Barnes hammered in a 39-yard field goal to give the ‘Dogs an early 3-0 lead.

Southern Miss then drove down the field in its next possession where running back Frank Gore Jr. scored on a one-yard rush to put Southern Miss up, 7-3.

Barnes scored Tech’s first 12 points of the day as he was 4-for-4 in field goals, including two from 43-yards and two from 39-yards out. His first three field goals were each countered by a Southern Miss touchdown as USM took a 21-9 lead going into the half.

Southern Miss would end up forcing five turnovers Friday night with three fumbles and two interceptions which resulted in 14 points.

Louisiana Tech forced three turnovers of its own. After the forced fumble by Grubbs early in the first quarter, Barnett intercepted a Gore pass attempt and returned it 46 yards to the USM 20-yard line.

Grubbs had a hand in another forced turnover in the fourth quarter as he forced yet another fumble which senior linebacker Trey Baldwin recovered and returned for a 43-yard touchdown to make it a two-point game, 21-19, with just under 12 minutes to play.

The Golden Eagles came right back with a touchdown of their own to extend the lead to 28-19 with 6:37 to go.

LA Tech’s final two drives of the game both resulted in an interception, including one pick-6, as Southern Miss won it, 35-19.

“Offensively, we couldn’t protect the quarterback. We couldn’t hold onto the ball. It was a poor performance offensively. I give Southern Miss an awful lot of credit. They played hard and they made plays they needed to make down the stretch. The bottom line difference of this game is they came up with some big plays and we turned the ball over.”