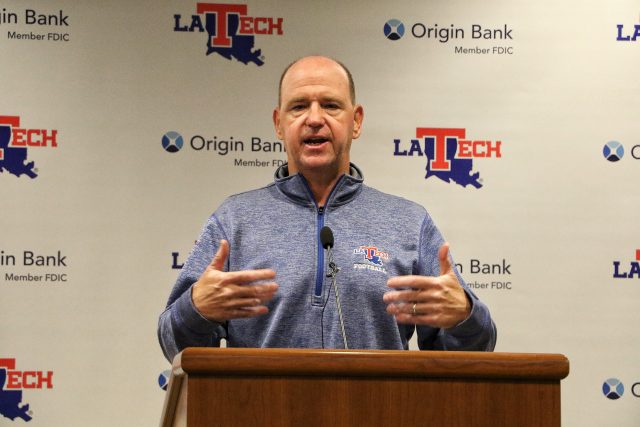 “Skip and I talked and agreed it was time for a change for both parties,” said Wood. “Louisiana Tech owes Skip a debt of gratitude for his loyalty and dedication to our football student-athletes, our University, and our community over the past decade.

“He has been able to accomplish some things that weren’t previously done here on a consistent basis prior to his arrival. We continue to be committed to winning conference championships, and that expectation is stronger than ever.”

Holtz was introduced as the 33rd head coach in Bulldog football history in December 2012. He led the program to two Conference USA championship game appearances (2014, 2016) and seven bowl appearances with six wins. He owns a record of 64-49 entering this Saturday’s season finale against Rice.

“This is the right time for me to evaluate a new start in my career,” said Holtz. “I’ve had the privilege of mentoring young people and building football programs for more than 30 years, including the last nine as head coach of Louisiana Tech. The past two seasons have brought additional challenges to our program, and I simply think it is time for someone else to have the chance to lead this special group of young men.

“I am not done coaching football and have great passion and energy to continue to lead young men through this game that I love so much. It is just time for me to channel my energies elsewhere.

“I appreciate the support of the University, my players and the Ruston community and am extremely proud of what we have done here. I hate that our streak of seven straight bowl appearances was broken this year. But the program is not broken, and I have no doubt that there are great things ahead for the Bulldogs. I am locking arms with our team to go out and compete with everything we have one last time against Rice.”

In his nine years at LA Tech, Holtz has amassed 64 victories – third most in program history – and recorded his 150th career victory earlier this year in a 45-42 win over Southeastern Louisiana. He has had 13 players selected in the NFL Draft, the most in C-USA.  He was named the Conference USA Coach of the Year in 2016.

Wood will name an interim head coach as the national search for Tech’s next head coach begins immediately.