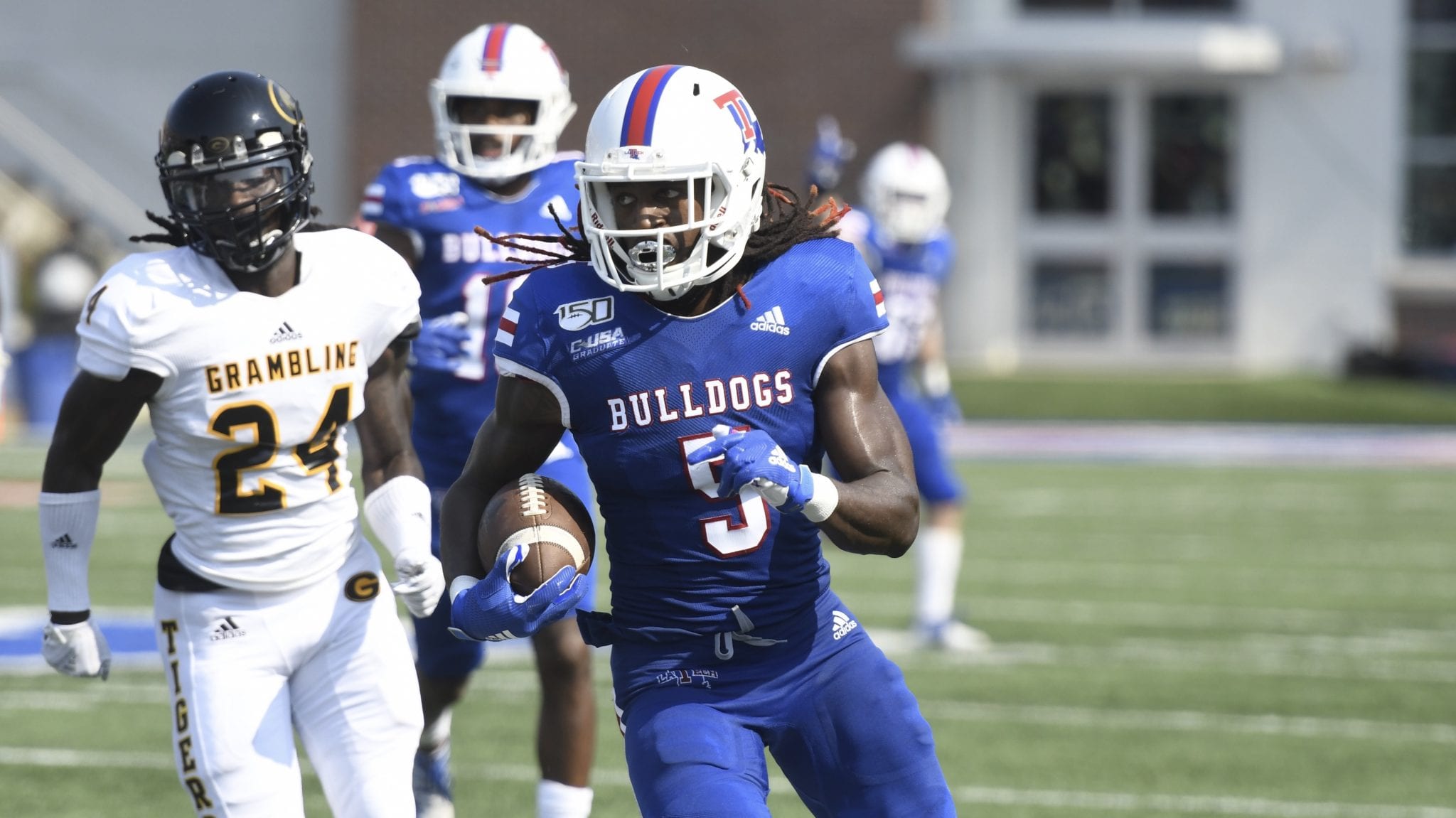 RUSTON — After leading by 20 at the half, Louisiana Tech survived a second half scare from FCS foe Grambling State as the Bulldogs prevailed 20-14 in the “Buddy Bowl” Saturday afternoon at Joe Aillet Stadium.

Both teams had to survive temperatures that reached triple figures on a sweltering afternoon that forced a large portion of the 23,174 fans to depart at halftime.  Even both teams bands left the stadium during the second half due to heat exhaustion. But the Bulldogs and the Tigers played until the clock reached zeroes.

“I understand both bands had to be dissembled because there were an awful lot of people being taken out with the bands,” said Holtz. “Some of the players were dealing with cramping issues. It was hot out there on that field, but I thought both teams showed incredible resolve – competitive nature – to stay out there and just keep competing the way they were.”

Grambling State did not seem to mind the heat as the Tigers played their best football over the final 30 minutes.

A Ray Richardson 23-yard TD reception in the third quarter and a Jakarie Nichols 2-yard scoring run with 3:23 to play in the game brought GSU (0-2) to within six points. The Tigers then recovered an onside kick, forcing the Bulldogs defense – which spent the majority of the second half on the field – to come up with a late stop.

With Grambling State inside Tech territory and looking for the go-ahead touchdown, the Bulldogs defense came up with a stop. On a fourth down and five play with less than two minutes remaining, Tech linebacker Collin Scott pressured Grambling State quarterback Geremy Hickbottom into an incomplete pass, sealing the win.

Tech went into victory formation, kneeling on the ball three times as the game came to an end as the shadows finally engulfed the field and temperatures finally reached livable levels.

Tech added 13 points in the second quarter on a pair of Bailey Hale field goals covering 33 and 48 yards and a 40-yard strike from J’Mar Smith to Griffin Hebert. The Bulldogs led 20-0 at halftime and outgained Grambling State 256 to 144 yards.

The tables turned in the second half. Grambling State totaled more than 300 yards after halftime and ran 53 offensive plays, controlling the football, the clock and the game during the 30 minutes.

“I certainly think there are a lot of lessons to learn, because we came out in the second half – and I don’t know if our players were trying to do the math and saying ‘You know what, we’re on a 40-to-nothing day,’ but the Grambling players came out and said, ‘You know what? We gotta roll up our sleeves. We gotta compete.’ I thought they came out with a fire and an energy and a competitive nature in the second half.”

But in the end the Bulldogs pulled out their first win of the season.

Tech returns to action Saturday when it travels to face Bowling Green.