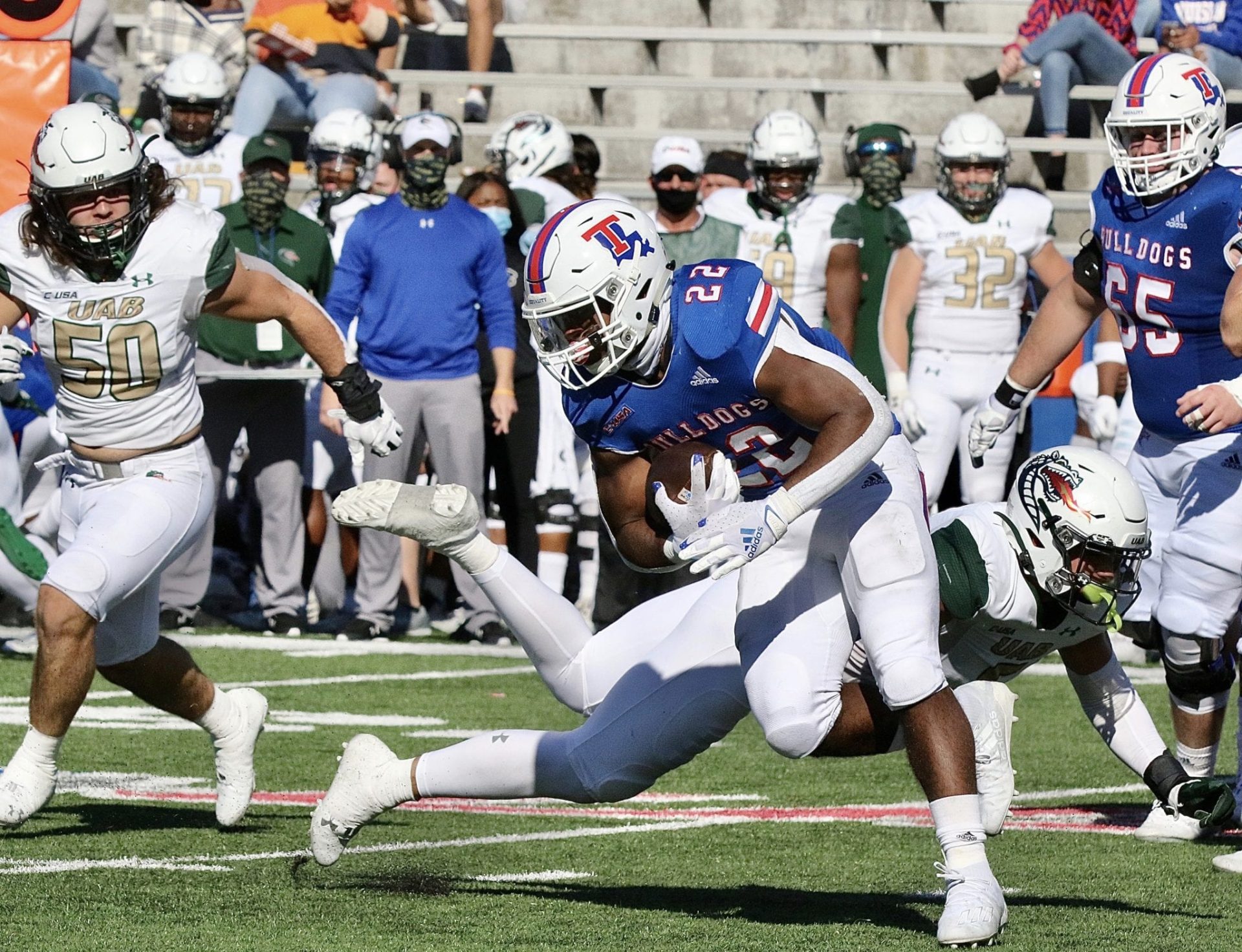 It was a Conference USA match-up that had all the ingredients to be one for the ages. And it was.

In a game that kicked off in the light of the day, by the time Barnes’ kick sailed through the uprights, the sun had set on both the day and the Blazers.

“This game was far from ordinary,” said Bulldog head coach Skip Holtz. “Lots of twists and turns. Ups and downs. It was a strange game for sure, but a big win for us against a very, very good football team.”

It took a late come-from-behind rally by Tech (4-3, 3-2 C-USA) to send the contest into overtime where neither team could find the end zone.

But the Bulldogs defense, which played its own version of trick or treat on the Tech Faithful during the 4-plus hour affair, came up big.

After each team traded field goals in the first OT period, UAB got possession of the football to start the second overtime and immediately connected on a 22-yard pass to the Tech 3-yard line.

On the ensuing play, UAB running back Spencer Brown found himself in a rugby scrum around the goal line before being stripped of the football by Tech safety Bee Jay Williamson.

Zach Hannibal recovered the loose football, seemingly giving the Bulldogs possession. However, as on par for most of the night, instant replay came into play and after a lengthy delay, the call on the field was confirmed.

Barnes’ 38-yard attempt sailed right as the Blazers sideline erupted. But a running into the kicker penalty – dropped after the play had ended but that was confirmed by video evidence – gave Tech a first down.

Three more running plays by the Bulldogs and Barnes had a second chance. This time the true freshman split the uprights from 35 yards away and it was the Tech sideline’s turn to celebrate as the Bulldogs snapped a three-game losing streak against UAB.

The first three offensive possessions of the night saw the Bulldogs drive deep into Blazers territory, including twice inside the 10-yard line. But the only points Tech could muster came on a Barnes 27-yard field goal.

It appeared Tech had taken a 10-0 lead on its second drive – following Bee Jay Williamson’s first of two interceptions and ultimate return to the UAB 3-yard line.

On first down, Luke Anthony appeared to hit Adrian Hardy for a TD but the official ruled the pass incomplete. Instant replay took its turn – the first of many on the night – and the officials ultimately confirmed the call. Tech would eventually go for it on fourth-and-goal from the two but came up empty.

Although the Bulldog defense surrendered 338 yards on the ground, it came up with big play after big play all night long. Williamson’s second interception of the night provided the game’s first TD.

The sophomore picked Blazers QB Bryson Lucero on the Tech 17-yard line, and after a three-yard return, pitched it to Khalil Ladler who then raced 80 yards untouched for a 10-0 Tech lead.

“I trust my teammates a lot,” said Williamson, who added a career-high 10 tackles. “I caught the picks and didn’t want to be selfish. I saw my teammate Khalil asking for the ball, and I gave it to him. He did the rest.”

UAB started to find its running game in the second quarter. DeWayne McBride raced 75 yards for the Blazers first score and then Brown gave UAB its first lead on a 6-yard scamper with 1:42 to play before half.

Brown’s TD run was reviewed when it appeared he had fumbled through the end zone, but instant replay couldn’t overturn it on the angles.

Tech answered on an 18-yard Luke Anthony to Adrian Hardy pass with 19 seconds to play before the half as the Bulldogs appeared poised to take the momentum and the lead into the locker room.

However, UAB returned the kickoff to its own 47. Following a nine-yard completion that gave the Blazers the ball on the Tech 44, UAB threw a Hail Mary to the near pylon that was ruled a TD catch initially.

However, instant replay overruled it as the Blazers receiver’s foot was just out of bounds on the catch. Tech led 17-14 at the break.

Matt Quinn added a 45-yard FG and the Blazers built a 31-17 lead heading into the fourth quarter.

The Bulldogs defense came back to life, holding UAB to only 30 total yards on 15 offensive plays in the frame.

Meanwhile, Aaron Allen rejuvenated the Tech offense. Allen completed 10-of-14 passes for 125 yards and two scores, including the game-tying TD to Hardy from 24 yards out with 10 seconds to play in the game.

Allen finished the game by completing 18-of-26 passes for 191 yards and two scores while Hardy led the Tech receivers with seven receptions for 101 yards and two TDs.

“Aaron did an unbelievable job,” said Holtz. “I don’t think a moment is ever too big for him. He wants to be on the field, and I’m really proud of him. We put him in a tough situation last week at the end of the game.

“I thought Aaron came in and created a spark and made some plays. He did a really nice job, and he had a few scrambles where he kept his head up and kept some drives alive.”

Both teams traded field goals in the opening overtime period as Barnes connected from 36 yards away while Quinn hit from 42 yards out.

The Bulldog offensive line played its most complete game of the season, not surrendering a sack despite 42 pass plays in the game.

Tech returns to action Saturday when its travels to Denton to face North Texas at 6 p.m.