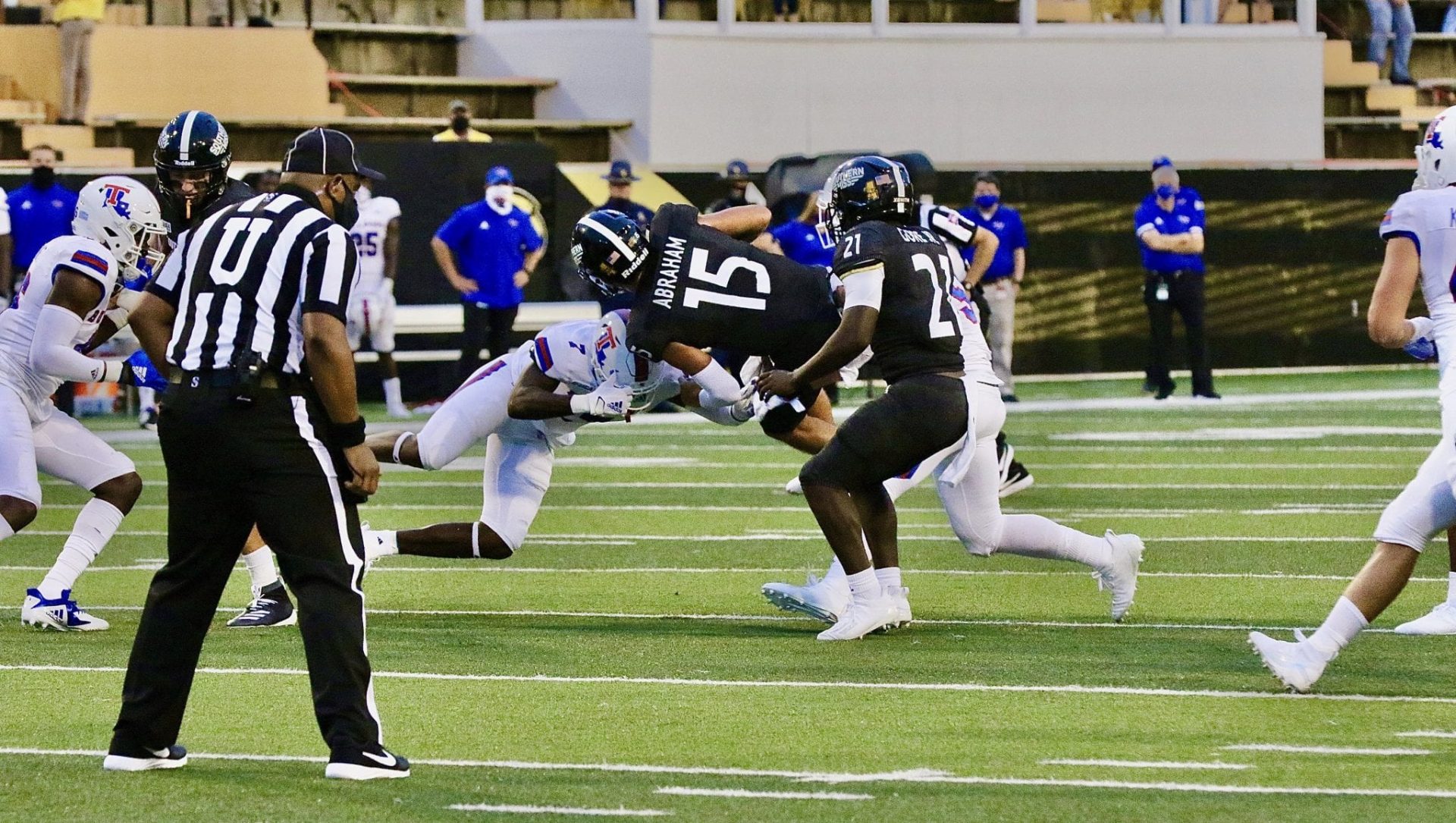 HATTIESBURG – The Louisiana Tech Bulldogs erased a 17-point deficit in the second half en route to a 31-30 victory over Southern Miss in their season opener Saturday night at M.M. Roberts Stadium.

Tech scored the tying touchdown on a 4-yard pass from graduate transfer quarterback Luke Anthony to junior receiver Griffin Hebert   on fourth-and-goal with 14 seconds left in the game.

Griffin caught the ball in the back of the end zone. The call on the field was incomplete, but after a review the ruling was Hebert had a foot inbounds.

The game was also the Conference-USA opener for both teams. Southern Miss fell to 0-2 overall.

“We said we needed to score one more point than they did,” Tech head coach Skip Holtz said. “I was really proud of this team. Proud of the way they competed. There were a lot of obstacles we had to overcome to get here.

“Having the top four linebackers out and having to start a true freshman at corner and to go out there and have those guys compete the way they did. This is one of the only times in fall camp to tackle live.

“I think some of the weaknesses showed. The one thing we didn’t know was how well they would compete in a tough environment on the road.  I couldn’t be more proud of a football team than I am the way they competed tonight.”

Tech trailed 27-10 midway through the third quarter. Senior wide receiver Adrian Hardy caught a 32-yard touchdown pass from Anthony to trim the lead to 10  with 5:31 left in the third.

The momentum continued Tech’s favor after an interception by sophomore defensive lineman Deshon Hall set up another TD.  Anthony hit sophomore wide receiver Smoke Harris for the 35-yard touchdown to cut the lead to 27-24 with 29 seconds remaining in the third period.

Southern Miss drove into Tech territory in the fourth quarter, attempting to go up by two scores. But senior defensive lineman Eric Kendzior sacked USM quarterback Jack Abraham on third down for an 8-yard loss to push the Golden Eagles the Tech 20.

USM converted on the 37-yard field goal attempt, giving the Golden Eagles the 30-24 advantage with just over five minutes to play.

“We were down 17 and the mindset if we could just get a touchdown,” Holtz said. “All of a sudden you are down three. The defense did a great job of forcing a field goal which meant a touchdown won it.

“We put a saddle on the offensive line. Greg Garner stepped in with fresh legs as a running back. The offensive line kept yelling at me to run it again and again. That is what an o-line wants to do.”

Garner had a 24-yard run in his first game as a Bulldog to put  Tech at the USM 27. The Bulldogs continued to work down the field until Anthony capped a 17-play drive by connecting with Hebert again in the back of the end zone for the win.

Hebert recorded the first points of the season for the Bulldogs after catching a 4-yard touchdown pass from sophomore quarterback Aaron Allen to give Tech a 7-0 lead with 1:49 to go in the first.

After Southern Miss tied it, Barnes made the first field goal of his career, a 28-yarder, to give Tech a 10-7 edge with 6:08 left in the second quarter.

Tech finished with 163 yards rushing, led by senior running back Justin Henderson with 69 yards on 18 attempts.

Anthony completed 13-of-21 passes for 149 yards and three touchdowns. Hardy led the team with 79 receiving yards on five receptions. The Bulldogs finished with 218 net passing yards.

The Tech defense produced two sacks, six tackles for loss and one interception. The Bulldogs were led by freshman linebacker Tyler Grubbs with 16 total tackles, including four solo, in his collegiate debut.

Senior linebacker Ezekiel Barnett, a former Benton standout, had  a career-high 10 total, including four solo and two for loss.

“There is pride in both of these programs,” Holtz said. “Both  teams lived up to the rivalry and what this rivalry and this conference is all about. It was an exciting game. The touchdown we scored to end the game was the same call earlier when Griffin caught it. It was just a lot cleaner in the first one than the second one.”

Tech returns to action on Sept. 26 when it hosts Houston Baptist at 6 p.m. at Joe Aillet Stadium.