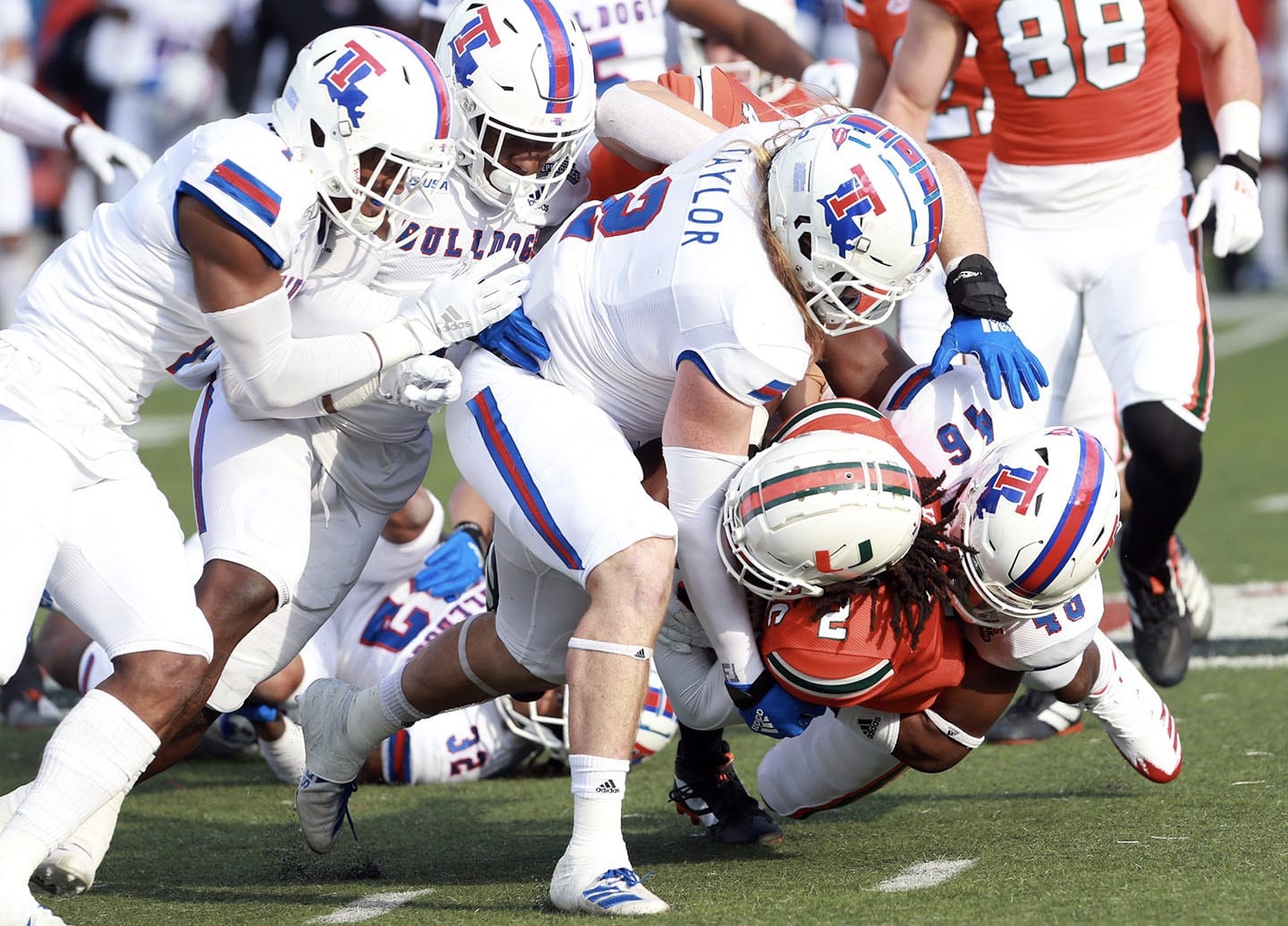 In the first 43 Independence Bowls, no team recorded a shutout.

The Louisiana Tech Bulldogs blanked the Miami Hurricanes 14-0 in the Walk-On’s Independence Bowl on Thursday before an announced crowd of 33,129 at Independence Stadium.

“I can’t say enough about these players especially this senior class and what they’ve been able to do while they’ve been here at Louisiana Tech,” Holtz said. “To be able to have a 10-win season, which is the first time, I believe, since we’ve been (FBS).

“To do what this team has accomplished, to go out, the seniors, to go out tied for first as the winningest class in history since we’ve gone Division I (in 1989). I can’t put into words my feelings and emotions for what they were able to accomplish.”

Miami was shut out for the first time since October 2015 against Clemson. The fewest points the Hurricanes scored this season was 16 in a 16-12 victory over Pitt.

“Obviously credit to them,” Diaz said. “They made more plays than we did. I can’t fault the effort of our players. Certainly proud of the way our kids played, particularly defensively with their backs against the wall all night.

“Our inefficiency on offense and our inability to sustain drives gave us no chance to win this football game.”

To say the game was a defensive struggle would be an understatement. Each team punted nine times for a combined bowl record of 18.

Miami, which tried three quarterbacks, didn’t reach 200 yards in total offense until the final minutes. The Hurricanes finished with 227 and never advanced past the Bulldogs 35-yard line.

“There are nine seniors on that defense,” Holtz said. “When you talk about the seniors in the secondary, all three linebackers – Collin Scott, Connor Taylor and James Jackson – Courtney Wallace was an absolute beast tonight inside. He was amazing. Ka’Derrion Mason played great. Darryl Lewis, L’Jarius Sneed and Michael Sam, Aaron (Roberson), so many guys, they really bought in.

“I’ve always said I’m OK winning a football game 2-0, but the offense screwed it up tonight because they scored 14. It was that type of effort. It was an unbelievable performance. I commend (defensive coordinator) Bob Diaco, (assistant coaches Brian) Gamble, (Jeff) Burris, (Dennis) Smith, (Rick) Petri for the job they’ve done.”

While the game lacked offensive fireworks, it did have suspense.

Miami’s best scoring opportunity in the first half was derailed by a penalty. On fourth-and-5 from the Tech 32, quarterback Jarren Williams gained 8 yards. But the Hurricanes were called for a personal foul and punted on the first play of the second quarter.

Miami’s defense kept the Hurricanes in the game.

Early in the fourth quarter, Gilbert Frierson intercepted a Smith pass at the Miami 21, thwarting a promising drive. Around the Tech 45, he tried to lateral but the end result was an illegal forward pass.

Still, the Hurricanes took over at midfield.

Miami converted a third-and-7 to the Tech 35. An illegal procedure penalty moved the ball back and the Tech defense stepped up again. After the Hurricanes gained a yard on a run, N’Kosi Perry threw two incompletions and the Hurricanes punted.

On third-and-7 from the 35, Tech’s Tristan Allen was called for targeting. The penalty moved the ball to midfield.

After offsetting penalties, former Huntington star Roberson picked off a Perry pass at the 37 and returned it to the Tech 44.

Smoke Harris and Smith had runs of 16 and 26 yards to set the Bulldogs up with a first-and-goal at the 8. Smith then score with 1:15 left to play.

Smith completed 13 of 28 passes for 163 yards with the one interception. Henderson rushed for 96 yards on 22 carries with most of the yardage coming in the first half.

Taylor, named the game’s Outstanding Defensive Player, led the Tech defense with nine total tackles. Former Benton standout Ezekiel Barnett was in on six tackles and had a sack.

Williams and Perry combined to complete 14 of 33 passes for 146 yards and two interceptions. Tate Martell played one series and completed one pass for 7 yards.

Cam’Ron Harris led Miami on the ground with 31 yards on 12 carries.

Sam Brooks Jr. and Shaq Quarterman were in on 12 and 11 tackles, respectively.