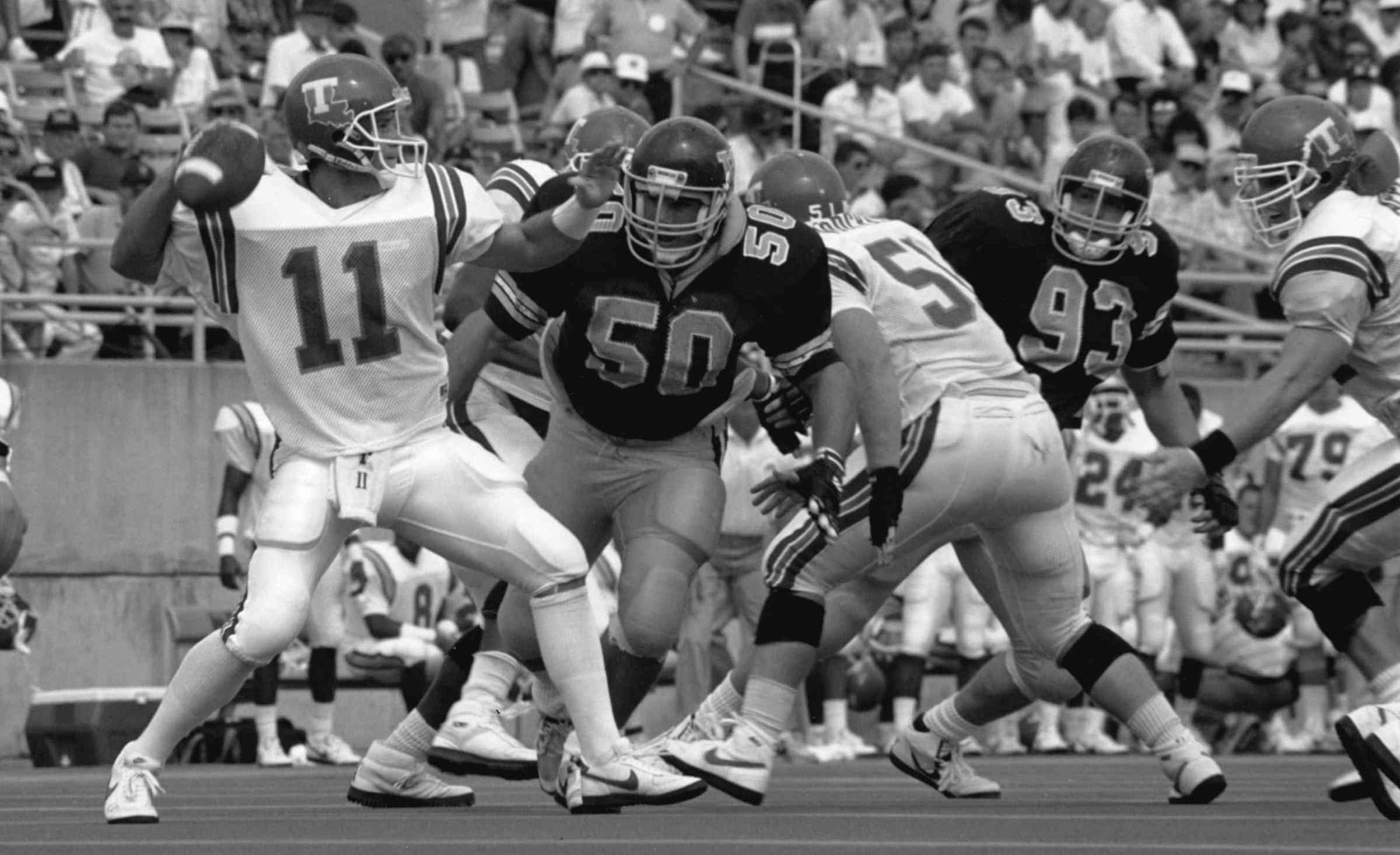 RUSTON —  Going bowling in December is something Louisiana Tech fans have become accustomed to during Skip Holtz’s tenure in Ruston.

Tech fans know the story. The University made the decision to move from Division I-AA (today, known as the FCS ranks) to Division I-A (now known as FBS) in the mid-1980s.

It was a move that didn’t prove easy in the early transitional years.

The 1988 team took the initial brunt of the decision. With only 65 scholarship players, Tech lost games by scores of 60-0, 66-3 and 56-17. But despite a 4-7 record and some lopsided outcomes, Tech showed signs potential for future years.

The following season (1989) saw a 5-4-1 record with respectable performances at Florida and Auburn. With Joe Raymond Peace and his never-say-die mentality at the helm of the program, a group of hard-nosed 19- and 20-year olds were turning into bowl contenders.

“In my mind, the 1990 team was a culmination of the 1988 and 1989 teams; a culmination of those three years,” said Alan Apple, one of the starting offensive lineman on those teams. “It was going through that crucible of games that we had against Houston and Florida State and Florida that prepared us to get to the point of being ready for 1990.”

“That’s a good way of surmising it,” said Peace, who coached the Bulldogs through the 1995 season and who entered the LA Tech Hall of Fame last fall. “It truly was. The grind that we went through in ’88 and ’89 was all a carry over to 1990.”

Apple might be the perfect example of the toughness that those teams embraced. As a redshirt freshman at Tech in 1988, Apple and Bulldogs opened the season in Starkville against Mississippi State. A tight end at the time, Apple saw action on special teams and a few offensive plays.

A few hours after the completion of his first collegiate game, Apple received news that his mother had been killed in a plane crash returning to Texas after watching her son play in Starkville. The following Saturday, Apple – who buried his mother just days before – suited up and played in a 60-0 loss to Houston … ironically at Independence Stadium.

Get knocked down. Get up. Keep fighting. That was the mindset of those Peace-coached teams.

“We had a bunch of scrappers,” remembers longtime Bulldog fan Dwayne Woodard. “Joe Raymond’s boys simply weren’t going to take anything off of anybody.”

Russ Golden, who played for the Bulldogs from 1989 through 1992, vividly remembers hat team’s mindset that it took from its head coach.

“I remember Coach Peace saying, ‘We’ll lock the gates and we will beat their (behinds),’” said Golden. “Our philosophy was that when we play at home, we win. And there is nothing stopping us from that.”

Louisiana Tech will honor the 1990 team Saturday during the Bulldogs home game against UAB. Kickoff is slated for 2:30 p.m. at Joe Aillet Stadium. More than 25 players, coaches and support staff are expected to return for the weekend.

In so many ways, the 1990 team helped kick start the program’s success on the highest level of collegiate football. The early days were critical to what Tech has been able to accomplish over the past three decades.

“You can look (at other schools) that are still struggling more than two decades into the experiment,” said Woodard. “1990 was a big year and (the Independence Bowl) was a big ball game. We had four or five years in the first decade (of FBS) where if the bowl system that is in place today was in place then, we would have gone bowling.”

The 1990 campaign didn’t start promising. Tech lost its opener at East Carolina 27-17 and then dropped a 27-21 decision to Western Michigan in the third game of the year. Wins over Arkansas State (40-7) and UL-Lafayette (known as USL back in the day) gave the Bulldogs a 3-2 mark heading into a road showdown at No. 5 ranked Auburn.

Many people felt that the Bulldogs showing at Jordan-Hare Stadium was the first true sign that Tech belonged on the FBS level. Although Auburn defeated Tech 16-14 on a controversial field goal on the final play of the game, the Bulldogs showed they could play with one of the nation’s top teams.

“(That performance) helped solidify it,” said Peace. “That we had made the progress and recruited well enough to be competitive. We felt like we could be competitive with anybody in the country.”

“We went in to win that game,” said Apple. “We should have won that game. Losing was not acceptable. The fact we played well was not a surprise to us. It felt more like we let one get away. That was our mentality.”

Golden recalls a player-only meeting in the team hotel the night before the Auburn contest.

“It was called by the seniors,” said Golden. “Eddie Brown was asking, ‘Why can’t we win? Who thinks we can’t win?’ Not a person in the room thought we couldn’t win that game. I think that team had a level of confidence. We believed in ourselves. It was just a lot of grit. That came from Joe Raymond. He never once allowed us believe that there wasn’t anyone we couldn’t beat.”

Tech reeled off four more wins following the loss to the Tigers, setting up the season finale against Colorado State. Earl Bruce and the Rams came to Joe Aillet Stadium as the favorite. The Rams led 30-14 in the second half before the Bulldogs never-say-die mentality took with Tech scoring the final 17 points of the game for a 31-30 victory.

The win upped the Bulldogs record to 8-3 and earned the program a berth in the Independence Bowl and a date with the Maryland Terrapins. It would be Tech’s first bowl berth since 1978 and its first as a member of the FBS ranks.

The hype for Tech fans was real. The Bulldog faithful showed up in force in Shreveport as a record-setting crowd of more than 50,000 watched the contest.

“The main thing I remember was just the size of the crowd,” Woodard said. “That was the most people I had ever seen at Independence Stadium and 95 percent of them were there to pull for Tech. That was the thing that really, really stood out.”

“It was a wonderful feeling,” said Peace. “It didn’t surprise me. I thought the Tech fans and alums were so excited about getting back to a bowl game and about the way that team represented them on the field.  It was a way to show their support and gratitude by showing up for that game.”

“Joe Raymond and his crew just caught the fancy of our fans as the year wore on,” said Prince. “They were just so gritty. It was his personality. They just fought to the end. It led into a real feeling of excitement leading into (the Independence Bowl).

“I remember just how good a game it was. How good a scene it was. How fired up our people were. There was a lot of interest. It created a great atmosphere.”

What did it mean for those Bulldog players?

“We had played in some packed stadiums and maybe even sellouts,” said Apple. “But they had always been 90 percent against us and 10 percent for us. When we were playing Maryland in the Independence Bowl, it was almost all red and blue.

“I can remember at one point, we were in the huddle during a timeout. All of a sudden our fans started the wave going around Independence Stadium. It made it all the way around a few times. The atmosphere was just a little different.”

“I remember pride,” said Golden. “I remember thinking man this is a home game for us. We brought out a home crowd. I remember being in the stadium just watching the people file in and being overwhelmed. We filled the place up, and I remember just being prideful. We earned this, and we got the support of the locals and felt like we were going to do everything we could to give them the best show we could.”

And a show out, they did.

The Bulldogs and the Terrapins played one of the most exciting games in Independence Bowl history, a game that ended in a 34-34 tie when Chris Boniol connected on a field goal on the final play of the game (this was before the overtime period in college football).

It is a game and a team that Bulldog fans still talk about three decades later.