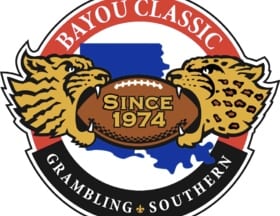 For awhile it looked like it might not happen. But that turned out not to be the case.

The Grambling State Tigers and the Southern University Jaguars will face off Saturday at 1:30 p.m. in the 47th Bayou Classic at Independence Stadium. The game will be televised on the NBC Sports Network.

The Bayou Classic is traditionally played in the Mercedes-Benz Superdome in late November and marks the end of the regular season. But after the Southwestern Athletic Conference’s fall season was postponed, school and local officials announced in October that the game would be moved to Shreveport just for this season. It will return to the Superdome in the 2021 fall season.

The move to Shreveport was made because of ongoing renovations to the Superdome. The second phase of the multi-year project began in February.

Saturday’s game appeared to be in doubt, though, after Grambling State suspended all football activities on March 24 due to positive COVID-19 tests within the program.

The Tigers had just played the third game of their six-game schedule. Games against Alabama A&M and Texas Southern were canceled.

But last week, it was announced the game would be played as scheduled.

Tickets are available through mybayouclassic.com. There will be no onsite ticket sales. All tickets must be purchased in advance.

All attendees must wear face masks unless actively eating or drinking while seated.

The national anthem will be performed by Casmè, who was on Season 19 of NBC’s The Voice.

Because of SWAC-mandated travel limitations, neither team’s band will be in attendance. The halftime show will be a retrospective of Bayou Classic highlights and the best moments from halftime shows over the past five years.

GSU brings an 0-3 record into the contest. The Tigers opened the season with a 33-28 loss to Jackson State at Eddie G. Robinson Stadium. That game drew national attention because it was the debut of JSU head coach Deion Sanders.

GSU had chances at the end to win both of those games. That wasn’t the case in the Tigers’ third game, a 48-21 home loss to Arkansas-Pine Bluff that Tigers head coach Broderick Fobbs labeled an embarrassment.

Hickbottom had completed 40 of 61 passes for 380 yards with two touchdowns and one interception.

Both Elijah Walker and Keilon Elder have seen action at quarterback in all three games. Walker started against Arkansas-Pine Bluff and completed 13 of 26 passes for 174 yards with one TD and one interception.

Former Arcadia standout CJ Russell leads the Tigers in rushing with 114 yards on 27 carries. Elder is just one yard behind him with 113 yards on 34 carries.

Former Airline star Phillip Lee, a redshirt junior defensive back, is the only player from a Bossier Parish school listed on GSU’s roster. He has played in two games.

Southern is 4-1 with its only loss coming against Arkansas-Pine Bluff 33-30 in the second game.

The Jaguars opened the season with a 24-21 victory over Alabama State. After the Arkansas-Pine Bluff loss, they defeated Texas Southern 51-23 and received a forfeit from Alcorn State.

In its last outing on April 3, Southern rolled past Jackson State 34-14.

Skelton also is the team’s leading rusher with 241 yards on 45 carries. That includes 53 yards in losses.

Ethan Howard leads the team in receiving yardage with nine catches for 160 yards.

Dawson Odums is in his 9th season as head coach.