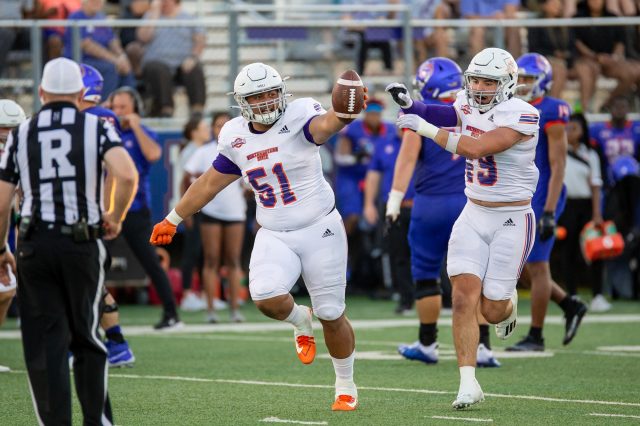 NATCHITOCHES – There is no other current Southland Conference football team Northwestern State has faced more than McNeese.

The opponent alone is enough to fire up fourth-year head coach Brad Laird, who has faced the Cowboys as a player, assistant coach and three times as a head coach. He will lead the Demons into the 72nd meeting between the teams at 3:05 p.m. Saturday inside Turpin Stadium.

“One, it’s great to be back at Turpin Stadium on a Saturday afternoon,” Laird said. “On top of that, we get to welcome McNeese. For those guys who have been here – coaches and players – they understand the rivalry. The newcomers, the freshmen who don’t, they’ll figure that out this week. It’s going to be a great game and a great atmosphere.”

Saturday’s game will air on Cox Sports Television (CST) except in areas where CST is unavailable. Then it will be shown on ESPN+.

It can be heard on the Demon Sports Network, flagshippedby 94.9 FM The River in Natchitoches. Free streaming audio of the game is available on www.NSUDemons.com and the Northwestern State Athletics app, which can be downloaded free for Apple and Android devices.

The Demons (1-4, 1-1) and Cowboys (1-4, 0-2) enter the matchup with identical overall records, but Northwestern State comes in off its first victory of the season, a 21-17 triumph at Houston Baptist on Oct. 9. McNeese has dropped two straight, including a 38-35 decision on Oct. 2 against Southeastern in the Cowboys’ most recent game.

Any victory that snaps a four-game losing streak would create positive momentum, but Laird said it wasn’t so much breaking into the win column but the way the Demons accomplished the feat.

“There were so many different situations and scenarios that made that win so gratifying,” he said. “The way we won the game. Being down 10-0 early. We get the lead late then lose it as soon as we got it. Defensively, we get the big turnover with seven minutes left, and the offense capitalizes to score and seal the victory. I couldn’t be more proud of a group.”

Northwestern State’s “Purple Swarm” defense continued its season-long knack for recovering fumbles, picking up three against Houston Baptist. NSU shares the Southland Conference lead with seven fumble recoveries, and its 11 forced turnovers are the most in the league.

Linebacker Jared Pedraza leads the nation with three fumble recoveries, all of which came in a two-game span against UT Martin (Sept. 18) and UIW (Oct. 2). That skill has found its way across the NSU defense, which has helped the Demons level their turnover margin on the season.

Defensive coordinator) Coach (Mike) Lucas puts us in position to make plays,” Pedraza said. “(Recovering fumbles) is just hustle. I’m doing what I’m supposed to do. If you do that, plays will come to you. Sometimes, it’s the luck of the draw, but if I see a ball there, I’m going to do whatever I have to do to get it.”

The Demons enjoyed a breakthrough against HBU, converting two of the Huskies’ lost fumbles into 14 points.

McNeese, meanwhile, has been the best team in the Southland in terms of keeping the ball. The Cowboys have committed a Southland-low four turnovers (two interceptions, two fumbles) through four games.

“It’s not just about getting the takeways, but are you able to capitalize on that and take advantage of those opportunities?” Laird queried. “Those previous weeks, we talked about it, and we were able to do so last week.”