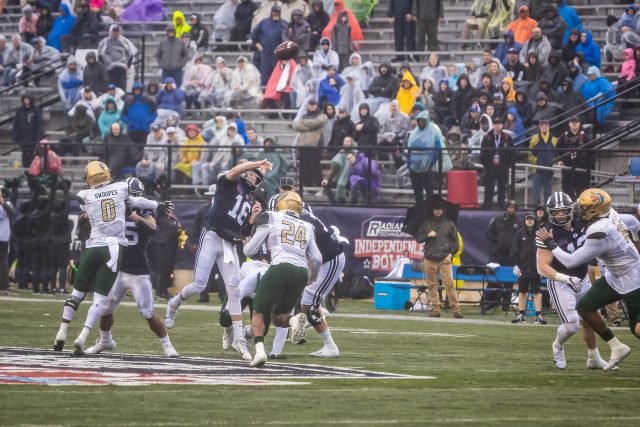 The UAB Blazers scored a touchdown with 6:17 left in the game to defeat the BYU Cougars 31-28 in the 45th Radiance Technologies Independence Bowl on Saturday at Independence Stadium

The game was played in wet, chilly weather after a cold front moved through Saturday morning. The announced attendance was 26,276.

The Cougars took a 28-24 lead on a 1-yard run by Tyler Allgeir early in the fourth quarter.  The TD capped an eight-play, 52-yard drive set up by Hayden Livingston’s interception.

DeWayne McBride rushed 10 times for 45 yards on the drive. He gained three yards on a fourth-and-1 at the BYU 20.

On fourth-and-7 from the 14, Dylan Hopkins hit Trea Shropshire for the go-ahead touchdown.

“I think we knew to win the game we had to go for it and score,” Hopkins said. “That’s what we did. Shropshire all year has been blowing by people and he just blew by his man to make a great catch and got the score. That’s all you can really ask for.”

BYU then drove from its 27 to a first down at midfield. Baylor Romney completed a 22-yard pass to Samson Nacua, but he fumbled and UAB’s Mac McWilliams recovered with 3:36 left to play.

The Blazers then got four first downs to run out the clock.

“Man, what a way to finish the game,” UAB Head Coach Bill Clark said. “They answered time after time. We protected the ball in a rainy, windy environment. We had that one tip ball (the interception). It was just kind of funky. Give him credit he made a good play but we protected the ball and then to win the game at the end.

“Running the ball when they knew it was coming. You know, Deebo (McBride) is going to say the same thing. O-line, tight end block. We ran the ball hard. Caught the ball. Dylan threw the ball well. Offensively just a great game.”

Clark said the victory was one of the biggest in the program’s history.

“You know, it’s definitely one of,” he said. “I think championships are huge. I put it right there with them.”

Both teams got outstanding performances from their running backs.

McBride had 183 yards on 28 carries, including a 64-yard touchdown run in the first quarter.

Allgeir gained 192 yards on 27 carries. He had two other touchdown runs covering one and 62 yards.

UAB’s Gerrit Prince had touchdown catches of 10 and 23 yards.

“I give a lot of credit to UAB for making plays,” BYU Head Coach Kalani Sitake said. “They made a couple plays more than we did. I felt like you know, and not to take anything away from them. I do think we’re a lot better and that’s my job is to make sure our team is better prepared, but I don’t want to just say that because I think UAB played a fantastic game and a great game.”