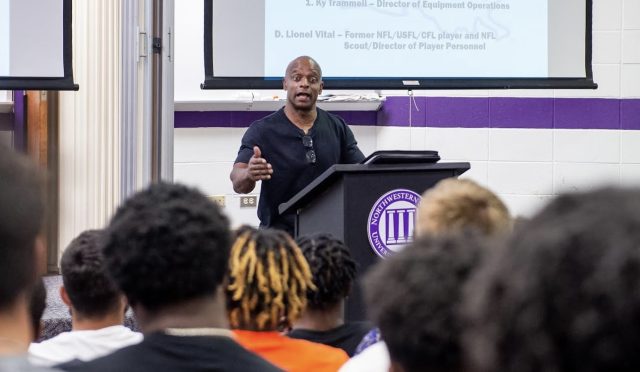 Former Nicholls running back Lionel Vital was a guest speaker who livened up what typically is a day full of administrative meetings and paper work. Vital played with the then-Washington Redskins in 1987 before beginning a scouting and executive career that lasted until his retirement six months ago.

“He has lived that journey, and it’s where all these guys want to go,” fifth-year head coach Brad Laird said. “To be able to hear from somebody who has come from where they came from, being a running back from Nicholls, to play in the NFL and CFL and, more importantly, be a scout. He knows what the NFL scouts are looking for, and he was able to relay that message to them – not just on the field, but he talked just as much about off the field. That’s a message these guys need to hear.

“It’s a different message. It fit his schedule for him to come here Day 1. It was a fitting way to kick start fall camp.”

Vital’s message of perseverance and success resonated with the assembled group of Demons, who kick off fall camp with a 9:15 a.m. practice Wednesday.

A former NFL scout and director of player personnel, Vital spoke and answered questions from a rapt audience, who hung on nearly every word of his journey from seventh-round draft pick to being cut to nearly turning down what became a decades-long career in scouting and front-office work.

“I just threw out pieces of 35 years, pertinent things that they can take with them,” Vital said. “It can be one or two things, it can be 10 things, that can help them get to the next level. That’s their dream. You have to push them to go to class, but they all want to go to the NFL. They all are trying to get to that level. I’m trying to make life lessons. This all parallels to life.”

Ahead of Vital’s question and answer segment with the players, he offered up a few questions to the Demons including what their goals as a team are for the upcoming season and what it means to win as a team.

As Vital echoed some of the responses from the team, those words stuck equally as much as the ones he spoke later.

Vital credited a “raw” uncle, who told him upon hearing Vital initially turned down an offer to scout that his nephew “must have rocks in his head.”

“He gave us a lot of great information we need as a team before we start our camp,” said senior safety Jabari Reddock, who transferred from Stony Brook in the spring. “We can connect more. As he said, culture is a big thing in any business setting. As a team, if we come together as one, have a great culture and are on the same page, the sky is the limit.”

A limitless future is one Vital saw himself with nearly 40 years ago when another professional athlete spoke to him.

“It makes me feel good to see young men sitting, listening and asking questions when they’re deep into what I’m saying,” Vital said. “I feel like I’m helping. They may be doctors or lawyers or one may end up speaking around the country.

“I was at Nicholls State and Willie Stargell came. He was speaking, and I loved him. It impacted me. I wanted to do that. Maybe not at that moment, but as the years passed, I thought, ‘Man, that was pretty cool.’ I don’t think I could fathom doing this if he had not come to my school. This is going to impact somebody eight to 10 years down the road. Someone’s going to grab a mic and talk.”