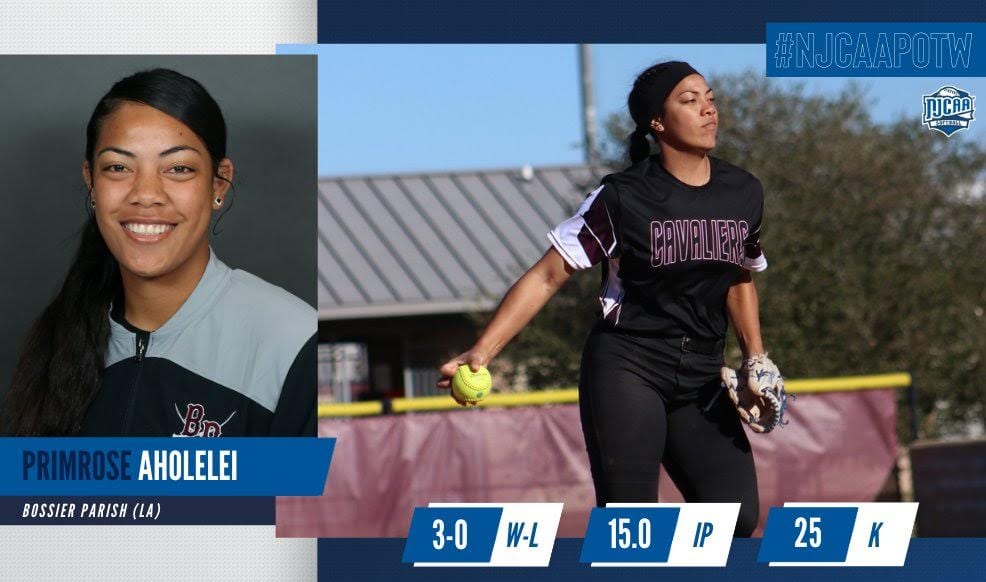 Aholelei, a redshirt freshman from Honolulu, Hawaii, posted a 3-0 record during the week of March 15-21.

Her perfect game highlighted No. 18 BPCC’s doubleheader sweep of Paris Junior College on March 17. The Lady Cavaliers outslugged the Lady Dragons 12-9 in game one, then Aholelei tossed her gem to lead BPCC to a 9-0 run-rule win in game two.

In the second game against Paris, Aholelei retired all 15 Lady Dragons who came to the plate. On just 54 pitches, she struck out 11 batters to earn her seventh win of the season. Her perfect game is the third in BPCC softball history.

Aholelei also had an incredible game at the plate as she went 3-for-3 with a double, a grand slam home run and six RBIs.

In her three combined starts during the week, she pitched 15 innings, allowed just two earned runs on five hits, two walks, while striking out 25.

The Lady Cavaliers are 23-5 overall and 8-0 in Region XIV. On Monday, BPCC moved up three spots to No. 15 in the latest NJCAA Div. I Softball Rankings.

BPCC returns to action on Saturday when the Lady Cavaliers travel to Athens, Texas to take on the Trinity Valley Community College Cardinals in a Region XIV doubleheader starting at 1 p.m.