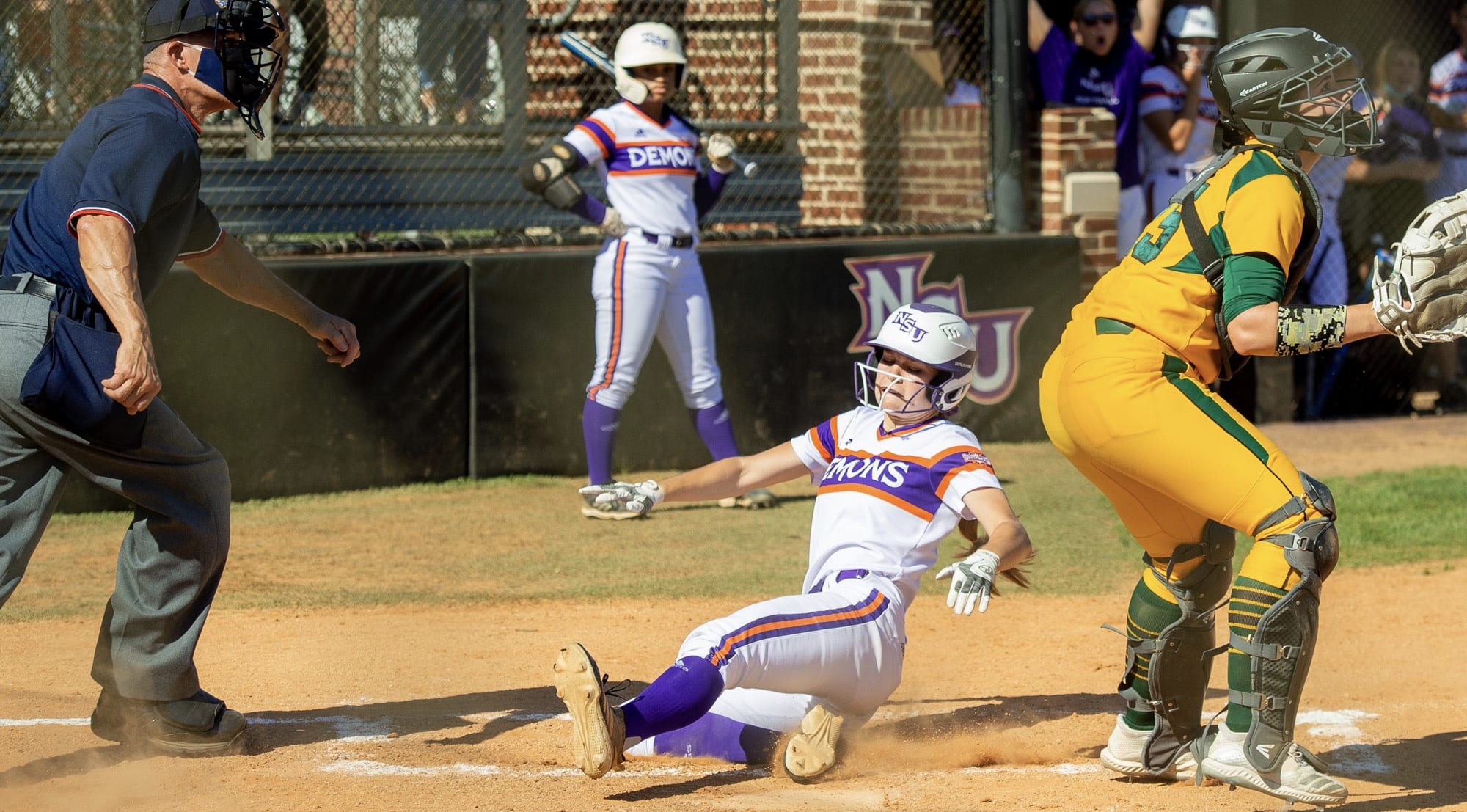 The two smiled and one message, relayed from Chaffin to Pickett, was uttered.

“We needed that,” said Chaffin, a former Benton and Airline standout.

The Lady Demons swept the Lady Lions — toppling them by scores of 9-4 and 13-5 in five innings — to take the Cypress Trophy. The pair of games featured contributions up and down NSU’s roster.

“I really like how we played tonight,” Pickett said. “We weren’t perfect, but we were confident and were able to get things done when we needed to.”

That collective effort was needed from a team-confidence standpoint. The wins were also needed with regard to seeding in the upcoming Southland Conference tournament.

Before that, however, the Lady Demons have one final regular-season game remaining, and it’s a meaningful one. NSU will honor five players as part of Senior Day on Saturday following its 12 p.m. game against the Lady Lions.

Chaffin experienced an entire cornucopia of emotions prior to the start of Game 1. When she learned of her starting spot — the first of her career — she had to take a step back and assess herself.

“I had to prepare myself,” Chaffin said. “I kind of freaked out a little, but then I was like, ‘Stay calm, be confident and go out and do you.’ I was super excited.”

She stepped into the box, confidently, in the top of the third inning and blooped a single to right. That jumpstarted a big day for the freshman.

“I’m really proud of that kid,” Pickett said. “She’s the most improved player we’ve had from last year to this year. In the last month, she’s come out here every day and puts in the work, knowing she’s not getting a lot of playing time, and she keeps working hard. She’s worked so hard that we can’t keep her out of there.”

Chaffin’s third inning hit didn’t just propel her to a big day, but it was the start of NSU’s big day. The Lady Demons put a three-spot up in the third, and one of them was an RBI sacrifice fly from junior infielder Cayla Jones.

That hit was only the tip of the iceberg for Jones. She finished with six RBIs on two hits, and one of those hits was the loudest of either game.

Jones launched a grand slam — on the eighth pitch of an at-bat in the sixth inning — well over the right field wall. It was an authoritative response to SLU, which had knotted the game at 4-4 in the top half of the frame.

“A lot of good things happen when Jones is at the plate,” Pickett said. “For us to have those runners on in front of her, it’s huge for our team. Cayla is capable of playing that way.”

The run support gave junior pitcher E.C. Delafield the victory, pushing her to 10-4 on the season. She went all seven innings, allowing two earned runs on five hits with four strikeouts.

Jones’ grand slam catapulted her into a nightcap that saw her record four hits and four RBIs. She, once again, stepped up with the bases loaded in the fifth inning and delivered a bases-clearing triple.

That put the Lady Demons ahead 11-5 and within striking distance of run-ruling the Lady Lions. And that’s where Chaffin came through, yet again.

Where she produced in her first at-bat of the day, she also closed out with another strong at-bat. In an eerily similar way, Chaffin blooped another single to right that scored freshman infielder Keely DuBois, finishing the game in five innings.

The end result was lopsided, but it didn’t start that way. The Lady Lions staked themselves to the early edge with a pair of runs in the first inning and one run in both the second and third frames.

Junior Jensen Howell, who received the start, was lifted in the second inning for freshman Kenzie Seely, who pitched strong in long relief.

“When (Seely) came in today, I felt confident in her,” Pickett said. “I thought she was going to do a really good job for us. She’s a warrior, and she went at them.”

Seely twirled the final four innings, allowing one earned run on five hits with one strikeout. The victory was the first of her career.

DuBois and freshman pinch-hitter Laney Roos joined Jones in the multi-RBI club. DuBois registered three RBIs on two hits, one of which was a double. Roos recorded a two-run double in the third that gave the Lady Demons their first lead, 5-4, of the nightcap.