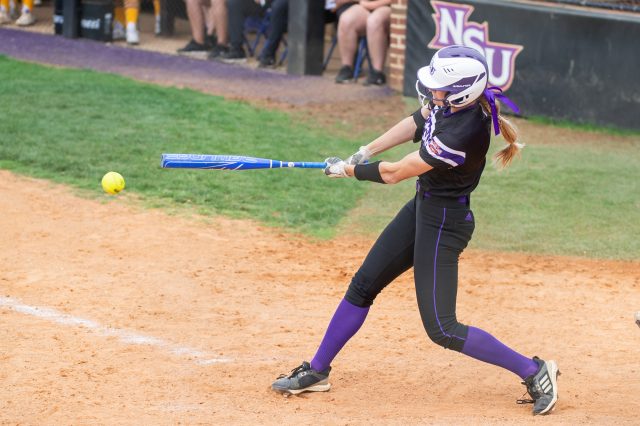 NATCHITOCHES – After a second straight one-run loss to start the day Northwestern State used a six-run inning in the second game to earn a split of Friday’s doubleheader with conference-leading McNeese.

A late run gave the Cowgirls the insurance they needed for a 3-2 win to secure the series victory in game one. A bloop, 2-run single from Keely DuBois and a blast of a 3-run home run from Makenzie Chaffin in the fifth of game two gave NSU the comfortable 8-3 win to avoid the sweep.

“Our girls fought,” head coach Donald Pickett said. “I don’t think we played great overall this weekend, but we woke up in the second game today and it kind of broke the ice. When Keely hit that home run, I think they realized that we can play with this team and we can do these things.

“I’m hoping we learn a lot from this and really understand the opportunities we have in front of us. Know that we have less than a month left in the season and we have the chance to do some special things down the stretch if we get going and get to work and put in the time.”

McNeese (26-16, 10-2) took early leads in both games of the day scoring a pair in the first game and another run in the second before the Lady Demons (25-17, 7-5) ever stepped into the box. Both times NSU was able to close the gap and keep the Cowgirls from extending their lead.

Perhaps the play of the weekend for NSU came in the third inning of the first game after a walk and two-base error in left put Cowgirls at second and third with no out, immediately after the Lady Demons scored on an RBI-single by Alexis Perry in the bottom of the second.

“The at bat right before it I misplayed a ball,” said Chaffin, a former Airline and Benton standout. “So when the shallow pop fly came to me with a runner at third I knew I had to do something to help my pitcher out because she earned that out.

“I was able to make a really good throw to Tristin at home for the out and then we got in the run down and got her too. It was really exciting to and got us out of the inning that could have been big for them.”

NSU turned in the triple play to end the inning but were unable to capitalize on the momentum it provided in the bottom of the frame.

McNeese’s insurance came in the top of the sixth thanks to some heady baserunning. On fly ball in foul territory in right field Laney Roos made a tremendous diving catch for the second out but allowed the speedy runner the chance to score from second on the play making it a 3-1 game.

After a Court single and Casey Irvin steal of second and throwing error moving her to third, Lexie Roos delivered yet another clutch pinch-hit at bat with a wall-banging single to left to make it a 3-2 game with still just one out.

The game ended two pitches later on a soft pop up to second that caught Maggie Black in between and led to McNeese’s second double play of the game.

The Lady Demons were down by two in the second game and after three inning without a hit needed a spark to wake the bats. Like they have done all season, the second time through the lineup for NSU has shown the most production and was the case again in game two.

Roos hit a sharp one-out single to left and two pitches later the game was tied as DuBois sent a missile over the wall in right center for NSU’s first two hits and first two runs of the game.

After reliever Bronte Rhoden worked around a bases loaded situation in the top of the inning, the NSU really came alive in the bottom of the inning and took full advantage of the smallest miscues by the McNeese defense.

After loading the bases on a hit batter (Court), single (Black) and error (Ragsdale) and seeing a force out at home for the second out of the inning it was the heart of the order that needed to step up for the Lady Demons.

Roos saw four straight pitches miss the strike zone giving her an RBI walk to put the Lady Demons ahead 3-2. DuBois followed with a flare hit that landed between four Cowgirl infielders near the back of the pitching circle allowing two more runs to come home.

The dagger came from the next hitter Chaffin who started the three-out play in game one and essentially ended the second game with a three-run home run.

“Coach Pickett challenged me to do something different,” she said. “I was able to work the count and she threw it over the inside part of the plate, and I was able to pull it and it went out. It was great, I was really excited to get my team a big lead to let us go into the last few innings with some cushion.

“It was really big to put up a big number on this team. That pitcher shut us out yesterday and we didn’t score any runs off her and they put her in, and we were able to make something happen.”

The Lady Demons scored six runs in the inning, all with two outs, doing so with just three hits.

Rhoden threw the final three innings of the game, after Sage Hoover went the first four, to pick up her fifth win of the season.