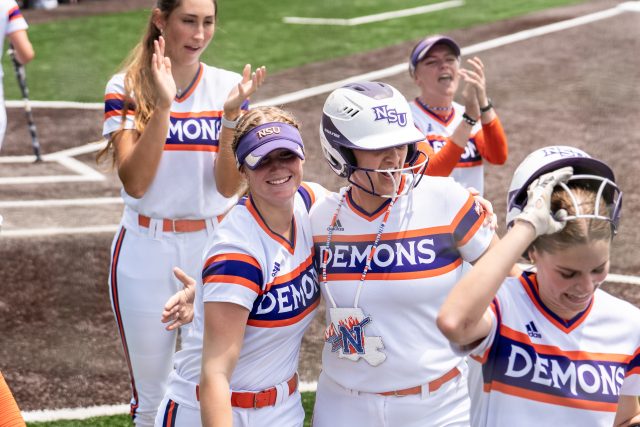 HAMMOND – An early blast and plenty of mental toughness helped Northwestern State pick up its fourth straight opening round win in the Southland Conference Tournament, topping UIW 4-3 on Tuesday afternoon.

“I was really proud of the way we bounced back today,” head coach Donald Pickett said. “We had a tough series this past weekend and it was tough for us to get back in the groove. Sage (Hoover) dominated the game outside of one or two pitches and they were able to barrel a ball up and make it a close game.

“We weren’t playing from behind as much with two outs and getting some runners on early, stole some bases and got a timely hit. That’s how you have to win in tournament play. Get timely hits, have good pitching and play sound defense.”

Much like they did in the series three week prior in Natchitoches, Lady Demons (29-20, 10-8) took advantage of free passes issued by UIW pitching.

The Lady Demons drew five walks, matching the second highest total in a conference game this season, both against UIW, with four of them either scoring in the inning or creating a run in the game.

The first two batters of the second inning reached via the free pass for NSU and a four-pitch walk to Makenzie Chaffin and a full-count miss to Alexis Perry. After a sacrifice bunt moved the runners into scoring position, Kat Marshall wasted no time bringing them, and herself, in turning on the first pitch she saw and depositing it over the wall in left, her third three-run home run of the season.

The Lady Demons got the leadoff batter on in each of the next three innings but were unable to cash in on the opportunities save for one run in the fifth, a bases loaded walk to Perry. NSU had the bases loaded with no outs in the inning but just the walk to Perry produced any offense.

The RBI walk proved to be the difference in the game after Hoover, who allowed just one hit through the first 5 1/3 innings saw a pair of perfectly placed, weak contact bunt singles find the turf to put two runners on in the sixth.

The Cardinals only hard hit ball of the game came on an 0-2 count and cleared the wall in left making it a 4-3 game going to the seventh inning.

After a striking out the first batter on four pitches, the Lady Demons found their first bit of controversy in the inning.

Marshall fielded a slow grounder to first with intentions of tagging the runner but her dodge five feet to the right forced the tag to miss and put the tying run on base. She would move to second on a hit batter that was initially called foul off the bat by the home plate umpire but overturned.

With the tying run in scoring position the Southland Freshman of the Year buckled down, showing composure beyond her years to get an easy pop up to second and ninth strike out of the game to seal the ninth one-run win of the season for the Lady Demons.

“We’re a young team out there,” Pickett said. “There are only tree or four players that have conference tournament experience. For us to be in that situation with things not going our way for the last two innings, and to step back, take a deep breath and continue to play the game the right way says a lot about them and how far they’ve come this year.”

The win moves NSU into a Wednesday morning matchup with top-seed McNeese scheduled for an 11 a.m. start on ESPN+.