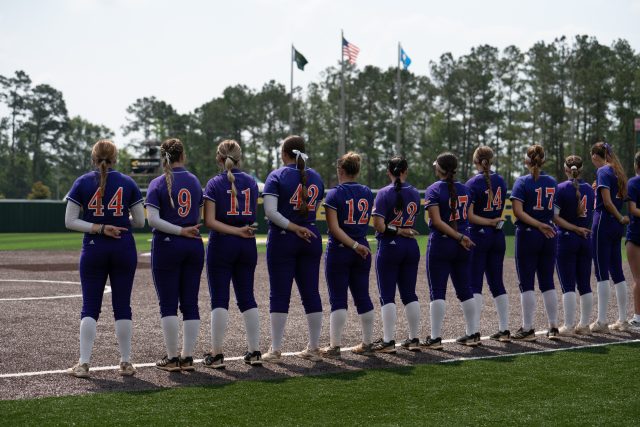 HAMMOND – Season-ending losses always hurt no matter when they come, but they sting just a little bit more when there’s a feeling of having beaten yourself.

That sentiment flowed through the Northwestern State softball team on Thursday following a 4-3 loss to Texas A&M-Corpus Christi.

“For some reason this week we’ve just not been able to make plays,” head coach Donald Pickett said. “We’ve made our fair share of errors and mistakes throughout the year but the one’s we’ve made the last two days, as many as we’ve made, have been uncharacteristic.”

The combination of two first-inning errors and nine runners left on base were the missed plays that cost the Lady Demons (29-22) allowing three Islanders to score and keeping NSU from putting up crooked numbers of their own.

Laney Roos led off the game with a doble to straight away center and came in to score after Bailie Ragsdale beat out and infield single and forced a wild throw to second on a stolen base.

The Lady Demons would only get the one run in the inning. Of the 10 innings in which they scored across three games, nine of them were only one run.

The Islanders answered in the bottom of the inning with a leadoff single and took advantage of back-to-back NSU errors to tie the game. A double to right center brought in two more unearned runs to give Corpus the early edge.

Just like they did in the intense game the day before against rival McNeese, the Lady Demons settled into the game and applied pressure to the Corpus defense and pitching staff.

NSU had baserunners in every inning of the game, and multiple base runners in four of the seven frames..

Roos got her fifth hit in two days to start the third with a no-doubt home run, her sixth of the season, to make it a one-run game at 3-2. Two more Demons reached in the inning, but after a soft single to shallow right, the Islanders were able to catch two runners off the bags for an inning-ending double play.

The Islanders were able to get the insurance run they needed in the bottom of the inning after a sinking fly ball just popped out of the glove of a diving Ragsdale in center that would have ended the inning.

That was the next to last hit that starting pitcher Kenzie Seely allowed, of the five total, where she allowed just two earned runs with six strikeouts, including three against Southland Player and Hitter of the Year Pal Egan.

“I was really proud of them for staying in the game, continuing to play and fight,” Pickett said. “That was there all week. We hit the ball well, got pretty good pitching – Kenzie threw a great game today – and if we would have backed her up at all early in the game I think she was in total control of the game.”

The fight showed itself one final time in the top of the seventh as Roos reached for the third time in the game with a leadoff walk and Ragsdale beat out another infield single, with both advancing a base on a throwing error by the Islanders.

Keely DuBois hit a fly ball deep enough to left to bring Roos in from third, making it a 4-3 game, and after walks to both Makenzie Chaffin and Alexis Perry, the Lady Demons had the go-ahead run at second with one out.

A ground ball to third allowed Corpus to get the second out and after another great battle at the plater by one of the hottest hitters in the tournament Kat Marshall, the NSU first baseman who hit a double earlier in the game, just got under a 3-2 pitch and popped it up to third for the final out.

The Lady Demons’ season ends with a 29-22 record, just missing the sixth 30-win season under Pickett from a squad that featured seven new everyday players and a nearly entirely new pitching staff.

“As young as we are we played the one and three seed this year to one-run ballgames and had chances to win both those games,” Pickett said. “So it’s going to be exciting to see where it goes and how this motivates our girls to put in the work during the offseason and see where it takes them next year.”