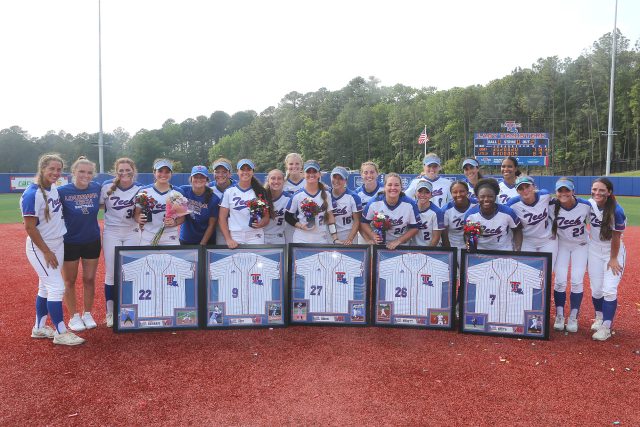 Trailing 7-3 heading into the bottom of the seventh inning, an outright Conference USA title looked bleak for Louisiana Tech.

WKU had won. North Texas had lost. And a loss by the Lady Techsters and the 2022 C-USA crown would be shared between the three programs.

And Tech would be the odd team out on the tiebreaker, forcing the Lady Techsters to open the C-USA Tournament in Denton on Wednesday during the single elimination portion of the tournament.

Call it fate. Call it heart. Call it destiny.

But call them Conference USA champions.

Four straight walks cut the deficit to 7-4 and with two outs. Madie Green followed with an RBI single through the left side to plate another run, setting the stage for heroics.

Katelin Cooper stepped up to the plate and promptly drove a 1-1 pitch to left centerfield where USM centerfielder Destini Brown made a diving attempt to catch. Brown came up short and the ball rolled all the way to the fence, clearing the bases and igniting pandemonium at Dr. Billy Bundrick Field.

“I have so many thoughts going through my head right now,” said Tech head coach Josh Taylor following the postgame celebrations. “The bottom of the seventh inning epitomizes this team. They have had a Bulldog mentality all year. They never flinched today. I can’t tell you how proud I am of this team. They deserve things title.”

Tech (38-18, 18-6) won its final 11 Conference USA games of the season to claim the programs second ever regular season title, joining the 2019 Lady Techsters squad. The 11 straight league wins set a new program record, breaking the record of 10 set by the 2019 squad.

She had a fielding percentage of .973 with six errors in 219 chances and had a hand in 22 double plays.

Southern Miss (29-23, 9-15 C-USA) came out of the gates strong, scoring three runs on four hits in the top of the first inning against Tech starter Audrey Pickett.

The Lady Techsters rallied in the bottom of the second inning, tying the game with three runs on three hits and two errors and chasing USM starter Jana Lee from the game.

Southern Miss came right back in the top of the third, scoring two runs on four more hits and regaining a 5-3 advantage. USM Paige Kilgore kept Tech off-balance for four straight innings, not allowing a hit.

“We were tight today,” said Taylor. “It’s understandable. This is a situation that only Lindsay Edwards has been in during their college careers. We tried to keep them loose, but we made some uncharacteristic mistakes and Southern Miss made us pay. Then we started pressing even more.”

Another two-run spot by USM in the top of the sixth inning on a two-out double to right center by Golden Eagles catcher Hannah Borden to increase the lead to 7-3.

Southern Miss loaded the bases with one out in the top of the seventh, but Emma Hutchinson inducted back-to-back pop ups to end the threat.

Tech will open the 2022 Conference USA Tournament on Thursday against the team that survives Wednesday’s single elimination day (No. 4 Marshall, No. 5 FAU and No. 8 UTSA).