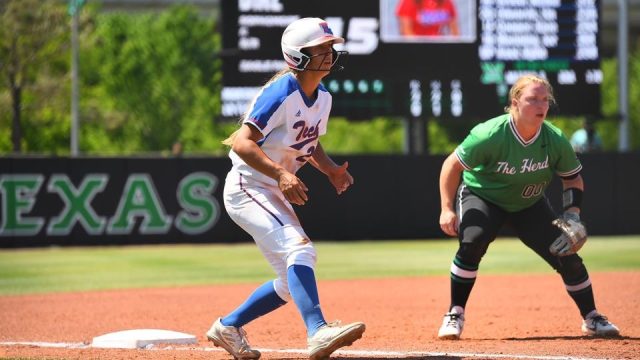 Tech recorded a season-high seven steals, belted three home runs and tied its season-high in runs in handing Marshall a 16-8 loss at Lovelace Stadium in a scorching Thursday afternoon in Texas.

With the victory, Tech (39-18) advances to Friday to take on 2nd seeded North Texas at 12 p.m. The winner of the game will advance to Saturday’s championship game while the loser will play again at 5 p.m. in an elimination contest.

Tech from top to bottom in its lineup against Marshall, chasing Conference USA Pitcher of the Year Sidney Nester after two innings.

After Marshall took a 2-0 lead in the top of the first inning on a pair of solo home runs against Tech starter Audrey Pickett, the Lady Techsters responded with a four spot in the bottom of the frame. A two-run single by Brooke Diaz and a two-run double by Jordyn Manning gave Tech a 4-2 lead.

The Thundering Herd tied it at 4-4 with two runs on a two-out error by the Lady Techsters in the top of the second. However, the tie was short-lived.

Tech plated three runs in the bottom of the second on sac flies by Caroline Easom and Lindsay Edwards and an RBI single by Madie Green.

Nester (25-10) took the loss, working only 2.0 innings while allowing seven earned runs on four hits – the most earned runs she allowed in any game this year.

After Tech loaded the bases with no outs in the bottom of the third but didn’t score, the Lady Techsters turned to the long ball in the bottom of the fourth inning. Green singled and one out later, Katelin Cooper launched a towering two-run shot over the right field wall for her second home run of the season.

One out later, Kylie Neel crushed a no doubter to centerfield for her second home run of the season and an 11-4 Tech advantage.

Marshall answered in the top of the fifth inning, plating four runs on four hits to close the deficit to 11-8.

Tech used a five-spot in the bottom of the fifth to end the game. A leadoff home run by Green, her 13th of the year, made it 12-8. Then a two-run single by Sacco – her third hit of the day – pushed the lead to 14-8. Amanda Gonzalez followed with a two-run double to right centerfield, scoring two runs and ending the game at 16-8.