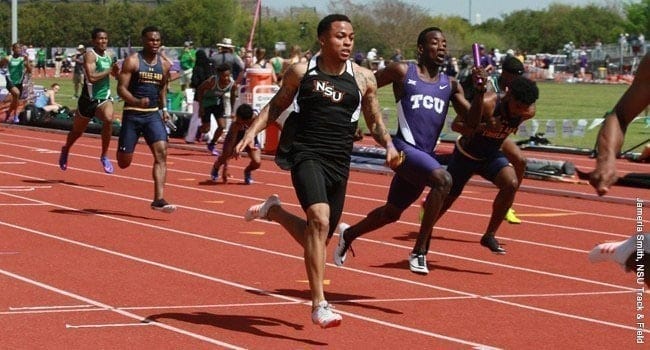 TAMPA – It’s nothing new for Northwestern State to advance a 4×100 meter relay team to the NCAA Outdoor Track and Field Championships, but for the first time, NSU is sending two foursomes.

And for the first time in 36 years, the Demons will have a shot putter at the NCAA Outdoors, thanks to a career day by senior Cedric Paul, a second-generation NSU thrower.

On a rainy Saturday at the NCAA East Preliminary Round, the first 90 minutes of racing and the last moments of competition were celebration-filled for NSU’s 20-athlete contingent.

Opening competition on the track, NSU joined LSU, Florida State and Kentucky in qualifying men’s and women’s 4×100 relay squads for the national semifinals, and an hour later, Lady Demon hurdler Daeshon Gordon punched her ticket individually in the 100 meter hurdles.

NSU’s busy schedule concluded when Paul, ranked 28th entering the day, snagged the 12th and final qualifying slot in his specialty with a career-best 61-3 ½ throw sailing 18 inches past his prior competitive best.

Adding Demons’ standout Micah Larkins, a former Haughton star who qualified Friday in the 100 meter dash, NSU made the nation’s top 24 in five events at the NCAA Outdoors June 6-9 in Eugene, Ore.

The nine-athlete travel party (not including an alternate for both relays) will be the largest in program history for NSU, which sent seven competitors in 1993, 2003 and 2016.

“What a very impressive day for Northwestern State and our track and field program,” said sixth-year head coach Mike Heimerman, who has been at NSU since he was a shot putter in the mid-1990s. “It’s been a fun ride, and we’ve got two more weeks of it. I’m ecstatic for the athletes and coaches who put in the work and performed so well here, even those who didn’t advance. We had a tremendous three days in Tampa – really wet, but really successful.”

Minutes after the Demons ran the fastest time ever by a Southland Conference men’s 4×1 squad, 39.34, the Lady Demons doubled NSU’s travel tab to Eugene with a third-place finish in their heat in 44.74, second-fastest in school history and third-best all-time on the Southland’s books.

It’s the first time the Lady Demons have reached the national meet in a relay, and the first time since hurdler Brittany Littlejohn in 2003 that an NSU women runner has advanced to the NCAA Outdoors.

Just over an hour later, Gordon, who ran the lead leg for the NSU women’s relay squad, nailed down double duty in Eugene by taking third in her 100 meter hurdles heat with the eighth-best time of the day, 13.30.456
The Demons qualified in the 4×100 meter relay for the 12th time since 1980, with six of those squads winning All-America honors, including the 1981 team that captured the NCAA title featuring Joe Delaney and Mark Duper. The last to do it: the 2016 foursome including Larkins and 2018 senior Amir James.

Joining Larkins and James, who have been the second and third legs on NSU’s relay team for three years, were two newcomers, sophomore Kie’Ave Harry out of the blocks and freshman Tre’Darius Carr handling the stretch run. Their 39.34 time was ninth best among the field of 24 regional finalists Saturday, and third best in school history, behind two different foursomes in the early 1980s involving Mark Duper as the anchor leg.

In the shot put, Paul led midway through the competition despite throwing in a steady rain. He came in ranked 28th with his 59-6 ¾ season’s best. Fellow senior Kyrin Tucker was sitting eighth with a 56-7 ½ best mark Saturday before the final 24 competitors began their three tries after the rain halted, but was passed by all of them and finished 32nd.

Paul watched as he gradually dipped to eighth, then 10th, and he sat on the bubble in 12th while eight lower-standing throwers took their last attempts trying unsuccessfully to dislodge him. He became the first NSU male shot putter to make the national meet since John Campbell finished fifth in 1982. Paul’s father, Clifford, threw the shot and played football for the Demons in the early 1990s.

Along with Tucker, NSU had other regional qualifiers competing Saturday who didn’t advance.

James ran 20.67 for 16th in the 200, a day after setting the school record for the second time this month in much-better weather conditions with a 20.41 clocking.