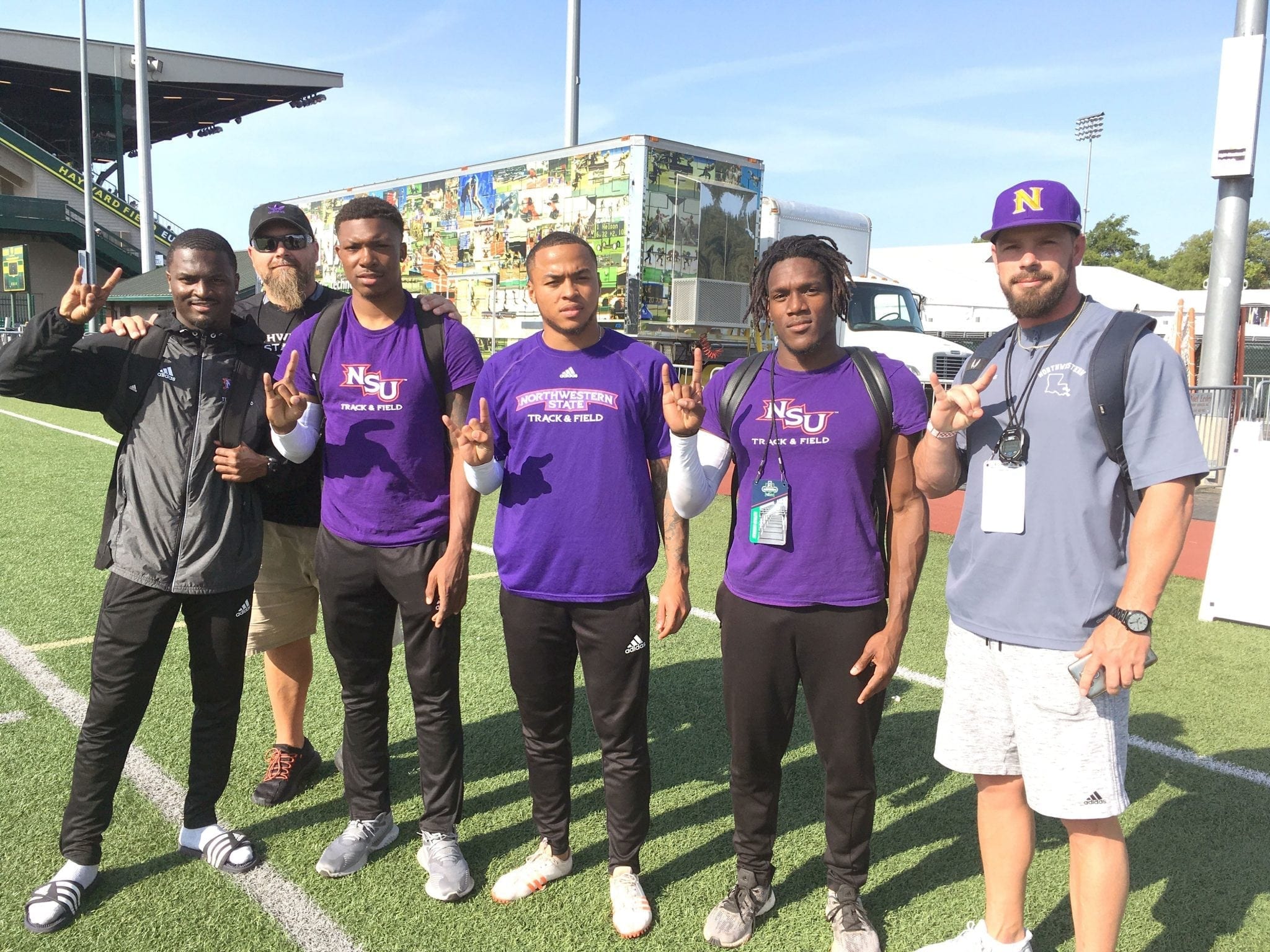 EUGENE, Oregon – The fastest 4×100 meter relay time in Northwestern State’s storied history of the event put the Demons into the national spotlight as one of eight finalists emerging from Wednesday’s semifinals at the NCAA Outdoor Track and Field Championships.

The mark was also an all-time Southland Conference best, erasing the 39.34 the same 2018 foursome ran at the NCAA East Preliminary Round to earn its spot in Eugene.

It was the sixth-fastest time Wednesday among the 24 national semifinalists. The performance also assured the Demon foursome of first-team All-America honors when they finish Friday’s 7:32 p.m. 4×100 final.

Larkins broke into a broad grin when asked about the personal significance of Wednesday’s time.

“That’s two records I’ve gotten that Joe Delaney had,” said Larkins, who broke his fellow Haughton native’s 100 dash record at Haughton High. “I’m very, very happy. It’s an emotional moment. Out of Lane 8 especially, not a fast lane, we ran that time. My exchange with Kie’Ave can be fixed. We ran a very technical race and we made it to the finals, which I’m very, very proud about that.”

NSU has qualified for the national meet in the 4×100 12 times, earning All-America honors on seven occasions, the last when James and Larkins were part of the 15th-place finishers in 2016.

The performance Wednesday gave the Demons their first NCAA finals appearance in 31 years, and came exactly 37 years to the day when Oatis, Delaney, Johnson and Duper thrilled the Bernie Moore Track Stadium crowd at LSU by topping Georgia, Tennessee, Arizona State and four others to become the first, and still the only, FCS-level relay team to win the NCAA Division I title.

The time validated pre-meet visions of the sprinters and their coach as it surpassed the iconic NSU record by Johnson, Edgar Washington, Ray Brown and Duper as they finished second at the 1982 NCAA Outdoors.

“We knew they could run sub-39, and I think they’ve got more in them,” said associate head coach Adam Pennington, NSU’s sprints coach. “When you have veterans like Amir James and Micah Larkins to build around, you’ve got an awesome cornerstone. Kie’Ave and Tre’Darius weren’t in our lineup to start the season, but as things evolved they became the guys to bookend it over the last 6-8 weeks and we’ve gotten better each time out.”

James, who graduated just under a month ago, sensed history could be in the works after he passed the baton to Carr to finish the race.

“I handed the stick to Tre, and I knew we were going to run something fast, something faster than we ran in Florida (three weeks ago at the East regional). When I saw the 38, I started hollering,” he said.

“I’ve been looking at the record board all year, 39.03. The NCAA champions have a plaque at the gate to the track. I just knew we were going to break the record this year,” he said. “This is our fourth or fifth iteration of the 4×1, so this is such a great feeling to mesh here at nationals.”

Carr had the best vantage point as he waited to get the baton and run the last 100 meters.

“When I saw Amir coming full speed, after Kie’Ave came out of the blocks like that, and Micah running down the stretch, I knew it was good,” said Carr. “It’s amazing. I’m speechless.”

The three 4×100 relay heats were the first track event Wednesday on the opening day of the four-day competition at historic Hayward Field on the University of Oregon campus.

Just over an hour later Wednesday evening, Larkins did not advance in the 100 dash semifinals, taking 18th in 10.175. The eighth and final qualifier for the final clocked 10.10.

“I kinda got stuck in the blocks, and still went 10.1, so I’m not complaining about it,” said Larkins.

The last Demon in action Wednesday was senior Cedric Paul, who made his first-ever national meet appearance. After entering the NCAA East regional ranked 28th, he finished 12th to earn his trip to Oregon, but fouled three times Wednesday and did not record a mark.

Thursday, NSU becomes one of only six schools to send both its men’s and women’s 4×100 relay foursomes onto the track this year when the Lady Demons compete in the 6:02 CDT semifinal round. Seniors Daeshon Gordon and De’Shalyn Jones, freshman Deja Moore and sophomore Natashia Jackson ran a 44.74 at the East Preliminary Round, finishing third in their heat and automatically qualifying, the first time the NSU women have advanced a relay team to the national meet.

At 7:02 CDT Thursday, Gordon returns to the track for her specialty, the 100 meter hurdles. She ran a 13.04 time in the opening round of the East Preliminaries and is a contender to make the eight-woman final on Saturday.

The top two finishers in each of three heats, along with the next two fastest times, advance to the finals. The top 16 finishers among the 24 national qualifiers earn All-America honors in each event.