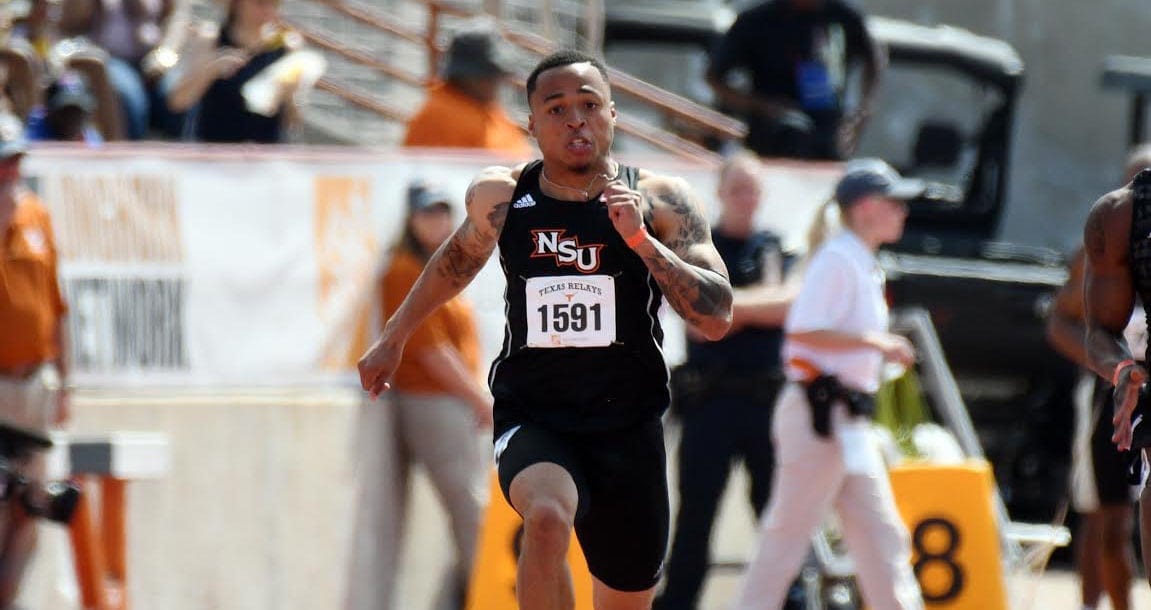 AUSTIN, Texas — In a series of remarkable performances in the sprints, relays and hurdles Saturday, Northwestern State standouts Micah Larkins, Amir James and Daeshon Gordon made their marks nationally on the final day of the 91st Annual Clyde Littlefield Texas Relays track and field meet.

Denied school records by wind readings, Larkins, a former Haughton star, and Gordon nonetheless posted blazing times in their specialties, while James also ran his fastest 100 meters and was part of the Demons’ 4×100 relay team that took bronze while outpacing Georgia, Baylor, Texas A&M and Texas in one of the meet’s feature races.

“It was a great day for Northwestern State track and field. Our sprinters and hurdlers showed up in front of 20,000 people and gave their best against the top competitors in the nation. We were able to compete with teams and athletes from the power-five conferences and beat them,” said sprints coach Adam Pennington, NSU’s associate head coach.

Larkins’ mark — best in the NCAA so far this season — approached the remarkable 9.95 wind-aided 100 time at the 2014 Southland Conference Outdoors by NSU All-American Justin Walker, who holds the wind-allowable school mark of 10.12 set at the 2014 NCAA Outdoors.

“Micah had a bad start but finished strong,” Pennington said. “Amir also ran a great race and there is still room to grow for both of them. The goal is to get them to nationals because they are top-tier runners in the nation.”

“I felt really good running the open 100 and running the relay,” said James, a senior who was along with Larkins a 2016 All-American in the 4×100 relay. His 100 time Saturday ranks him fourth nationally. “I was able to push myself to run a great race.”

The Demons’ performance raised them to seventh in the NCAA rankings this season. It is the fastest-time that NSU has run since Victor Oatis, the late Joe Delaney, Mario Johnson, and Mark Duper ran 39.32 to claim the NCAA title.

“Even though Kie’Ave is a relatively new addition to the relay group (Harry replaced injured regular Desmond Mapps in the lineup), we were able to run well despite the lack of practice time together. We executed our handoffs better and we have a great anchor-leg runner in McGruder,” said James.

In the invitational women’s 100-meter hurdles, Gordon rolled across in a third-place, wind-aided 13.12 (+3.2 mph), 12th nationally. Like Larkins’ 100 time, the wind reading denied the NSU senior a school record-breaking mark.

“Gordon competed against junior national champion Tara Davis of Georgia (who won in 13.04) and ran head-to-head with her despite suffering blisters on her foot. She is a competitor and is finally clicking on the track and regaining her freshman form (when she won All-America honors at LSU),” Pennington said.

Lady Demon senior sprinter De’Shalyn Jones clocked a wind-aided (+4.0) 23.22 for third in the 200 invitational, the 11th best-time in the country this season. The wind also was too much for Jones to record a school record.

“De’Shalyn ran a very smooth race,” Pennington said. “She ran the first 100 meters into the wind but was still able to run a very good time.”

“Cedric did a great job and he was close to 59 feet. He was too amped up at his first throw but slowed down and threw better in his fourth and fifth attempts,” said head coach Mike Heimerman, the Demons’ throws coach. “I can’t complain about his performance because he now knows he can compete at the highest level after facing the best in the nation.”

Harry, McGruder, James, and Larkins withdrew from the 4×200 Invitational. Similarly, Jones, Natashia Jackson, Widline Lageroy, and Deja Moore did not participate in the 4×400 final Saturday after clocking a blistering 3:40.20, fifth-fastest in qualifying and second all-time in school history, on Friday.

“I didn’t let them compete because they were exhausted from this long meet and also the recovery time between the events were too short in order compete in both events,” said Pennington.

NSU, which has its only home meet April 28, heads to the Stephen F. Austin Skechers Carl Kight Invitational next Friday and Saturday.