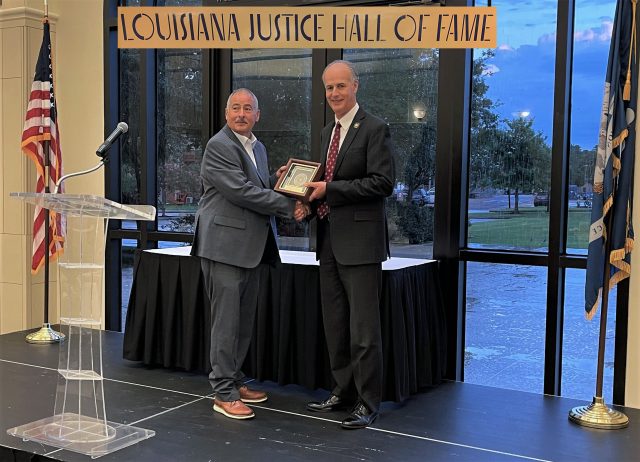 On Friday, June 3, Bossier Sheriff Julian Whittington was inducted into the Louisiana Justice
Hall of Fame in a ceremony at the Lod Cook Hotel and Conference Center in Baton Rouge.

Sheriff Whittington and eight other distinguished inductees from around the state were honored
by the Louisiana State Penitentiary Museum Foundation for their dedication to public service and their
contributions to improving the quality of life for the citizens of Louisiana.

“The day I became the Sheriff of Bossier, I was deeply humbled that the people chose me to be
the chief law enforcement officer of the Parish,” said Sheriff Whittington. “Now, I am more than
honored to be recognized by the LSP Museum Foundation for the work that I have loved to do for
more than 30 years.”

During his acceptance speech, Sheriff Whittington noted how he had a lot of help getting here.
He thanked his family for always standing with him and understanding when he was gone. He also
thanked the people of Bossier for having the trust and confidence to elect him as their Sheriff. “The
people of Bossier expect, demand, and fully support good law enforcement,” said Sheriff Whittington.

Lastly, he recognized the BSO team. “We have the most dedicated professionals anywhere,”
said Sheriff Whittington. “We strive daily to provide Courteous, Professional, and Responsive service
to our residents.”

Sheriff Whittington not only serves as the “top cop” in Bossier Parish he also serves on several
boards in the community. He most recently served as President of the Louisiana Sheriff’s Association.

Photos and other Bossier Sheriff’s Office memorabilia will be showcased at the Angola
Museum at the Louisiana State Penitentiary.

The Louisianan Justice Hall of Fame was established by the Louisiana State Penitentiary
Museum Foundation Board of Directors in 2004 to honor and acknowledge the men and women of
Louisiana who serve their community and their state in the honorable profession of law enforcement,
the judiciary, criminal justice, civil service, and other related fields.