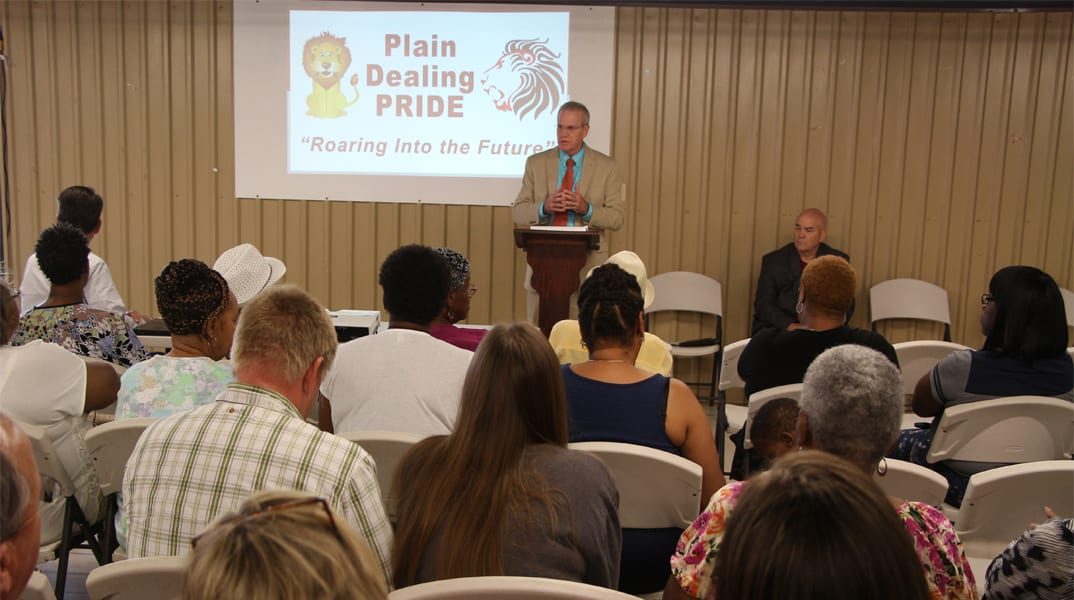 Bossier Schools administrators have developed a plan that will send Plain Dealing schools roaring into the future, should it be approved by the Bossier Parish School Board.

The plan, as presented by Superintendent Scott Smith, calls for a reconfiguration of Plain Dealing’s schools into one pre-K through 12th grade school, creating a unified campus for all students. He stressed that the plan has to be approved by the building and grounds committee first, then be approved by the school board before it can be implemented.

Enrollment numbers show a significant decrease in student population over the past decade. Keith Norwood, Supervisor of Planning and Construction for Bossier Schools, said the latest numbers provided by the board’s demographer shows a continued drop over the next 10 years.

“These numbers are really startling when you look at them by grade level,” Norwood said. “We’ve lost almost 300 students in the last 15 years, which is almost half of the school population there. It’s just been a slow, steady decline.”

By the end of the demographer’s 10 year projection, Plain Dealing schools will be down to 156 students for pre-K through 12th grade.

A team of administrators have spent many hours studying the feasibility of a unified campus in Plain Dealing, even visiting other schools in the state who have successfully done it.

“Since we had our last meeting with the Plain Dealing community in the fall, we put a tremendous number of administrative hours into developing a plan that we feel would be a very productive plan,” Smith said. “We started with the curriculum department, led by Dr. Nichole Bourgeois, and the grade level supervisors. They brought back a lot of great ideas on ways to keep the kids separated, how to run lunch shifts and physical education classes, and the best way to format a curriculum for pre-K through 12 configuration. We’ve made many trips to Plain Dealing to figure out how we can utilize the setting up there and it be most advantageous to our students.”

Smith explained that the current high school and middle school campus is actually perfect for this kind of reconfiguration.

“We have three natural buildings there, which works out very, very well for this plan,” Smith said.

The plan is to create a new pre-school and kindergarten pod on the ground level of the activities building, which will house classrooms and a multi-purpose room, with restrooms, a library, an adjacent outdoor playground and parent drop-off area.

“We plan to accommodate the younger students very well with this new construction,” Norwood added. “Although we are downsizing a little bit because they won’t have as many students, they will still have the same basic setup they have now.”

Other areas of the campus will also see changes, including sidewalk, paving and handicap accessibility improvements. Norwood said the school also has two gymnasiums, meaning a separate facility for the younger students to utilize away from the older students.

“There’s plenty of flexibility with these buildings,” Norwood said. “Once we reconfigure and occupy, there will still be some space for them to decide what they want to use it for.”

Construction would be completed in a two phase approach. The plan also calls for creating additional programs for the high school students, which Smith called a “huge advantage” for the town.

“We want to create an educational ecosystem in the Plain Dealing area because of its remote distance to the city,” Smith said. “A lot of the students don’t get to take advantage of the amenities that are inside the Bossier City limits, like BPSTIL [Bossier Parish School for Technology and Innovative Learning]. We only have about three students now that are taking advantage of those offerings.”

Smith also stressed that no one would lose their job during the reconfiguration process.

“We will continue to maintain a full staff, but some faculty and staff will have the option to transfer to a school that is closer to their home,” Smith added.

A town hall meeting was held in Plain Dealing Monday evening. The building and grounds committee was also informed of the proposed plan Tuesday afternoon. Reactions and results from those meetings were not available by press time.

If approved by the Bossier Parish school board, the reconfiguration plan would be implemented and ready for the 2018-2019 school year.

“We are hoping to get permission to go ahead with this reconfiguration plan,” Norwood said, noting that a vote by the Bossier School Board could happen at the May 18 meeting if the building & grounds committee makes an approval recommendation Tuesday night. “We believe that we can have it ready by the fall of 2018, which aligns with the proposed opening of the new Haughton K-5 school.”

Smith said he feels confident in the plan that is being proposed to the community and school board.

“We have put together a very comprehensive vision for a pre-K through 12 configuration for Plain Dealing,” Smith said. “There have been literally hundreds of administrative hours put into this and we’re confident in all the work that has been done so far. This is truly an investment into the Plain Dealing community.”