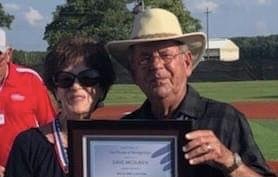 Dave and Dianne McQueen have been big supporters of baseball at all levels of the game in Bossier City and beyond for many years.

They were there to award the first scholarship from the Dave and Dianne McQueen Endowment.

In 2019, the McQueen Foundation pledged $2,500 to the Dixie Boys Baseball Scholarship Fund. The first contribution of $500 was made at the Dixie Pre-Majors and Majors World Series opening banquet in Monroe. By November of 2019, the full pledged amount had already been reached.

After the presentation the McQueens remained on the field as a surprise awaited them. Dave McQueen, with his wife of 57 years by his side, was inducted into the Dixie Boys Baseball Hall of Fame.

“Dave and his wife have dedicated many years to the young men of Dixie Baseball and DBB. You can find Dave around the ball field sharing his heartfelt stories with just about anyone that will lend an ear to listen to him. Not only sharing his stories Dave shares the hope of a young player from the diamond that wants to go on to college and further his baseball career and makes it possible for these young men to do this.

“We have witnessed Dave help many young men get into a college when there seem to be no hope of them ever stepping foot on a baseball diamond again. Dave and his wife are well deserving of this Induction into the Hall of Fame of DBB Baseball and will continue to be asset to our program and to know them is to love them. They have away of stealing your heart!!!!”

Dave McQueen played Dixie Baseball as a youth and then became a coach in the organization. In 1989, the McQueens became known as the “Voice and Lights” of baseball. As volunteers, Dave handled PA duties and Dianne operated the scoreboard and music.

Their trips around the Southeast included nine World Series events.

Dave was also the PA announcer for Airline baseball for many years. He is a longtime scout for the Colorado Rockies.

A book about McQueen’s journey titled “Say the Prayer, Wait for the Plan: A Tribute to the Life and Ministry of Dave McQueen, Professional Baseball Scout,”  was published in May. It is available for delivery on amazon.com.