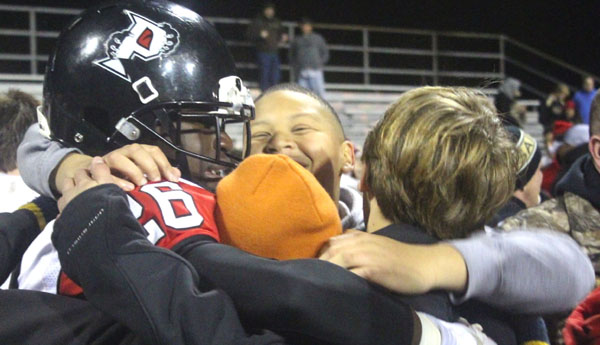 Midway through their Class 5A semifinal game against Covington Friday, the Parkway coaching staff knew something had to change.

The Panthers were having trouble stopping the Lions offense and were down 20-7. A trip to the Mercedes-Benz Super-dome hung in the balance.

Facing a Covington offense with two capable running backs, Parkway defensive coordinator Neil May initially thought constant blitzing would be the way to control it.

“We felt like we were going to have to bring pressure with blitzes to stop these running backs before they could get started,” May said. “We were kind of going to get away from our normal style of defense. Typically, what we like to do is read and react and play technique defense and I felt like that wasn’t going to be enough.”

May said at times the plan worked. But at others it hurt the defense’s man coverage in the secondary. One of the Lions’ touchdowns came on a 64-yard pass play.

So May and the Panthers staff decided to go back to playing their regular defense late in the second quarter.

“I said, ‘Look, we’re going to have to get away from all this blitzing and get back to what we do best, and then bring the blitz at opportune times,’ ” May said. “And it was great. That’s what we did. We got back to our traditional 3-3, let’s read and react and play technique and it worked. Our kids played it great.”

The Lions scored one more touchdown after that on a 1-yard run after an interception return late in the half.

In the second, they didn’t score any.

Parkway scored only once but it was enough as the Panthers won 28-27.

Parkway (12-0), the No. 2 seed, will play for a state championship for the first time in school history against No. 1 Acadiana (13-1) Saturday night at 8 in the Superdome. Covington, the No. 14 seed, ended a surprising playoff run 9-5.

Making the defensive adjustment was key, but the Panthers’ determination was a bigger factor, May said.

“I think it was just their will,” he said. “We made some key fourth-down stops, and we ended up getting into some good zone coverage and were able to get interceptions. Those kids played so hard. It was awesome to watch.”

Perhaps the biggest stop came late in the fourth quarter with the Panthers clinging to the one-point lead.

Covington faced a fourth-and-2 with 2:22 left in the game. Parkway linebacker Austin Averitt tackled CJ Sims for a 4-yard loss.

When quarterback Brandon Harris sneaked for a first down on fourth-and-1 a minute later, the Panthers were able to run out the clock and the celebration began.

Averitt had a huge game. He intercepted two passes in the second half. Marquis King also had a big interception of a halfback pass.

Parkway blocked an extra point after Covington’s third touchdown. Panthers kicker Avery Shoebridge made all four of his attempts, the ultimate difference in the game.

The Panthers’ offensive stalwarts came though, too.

He also passed for 113 yards and two touchdowns in the first half — a 13-yarder to Demetrius McAtee and a 4-yarder to Broderick Jefferson, who played through an injury.

William McKnight scored the game-tying touchdown on a 36-yard run in the third quarter. Stacy McCray gained 64 yards on 12 carries.