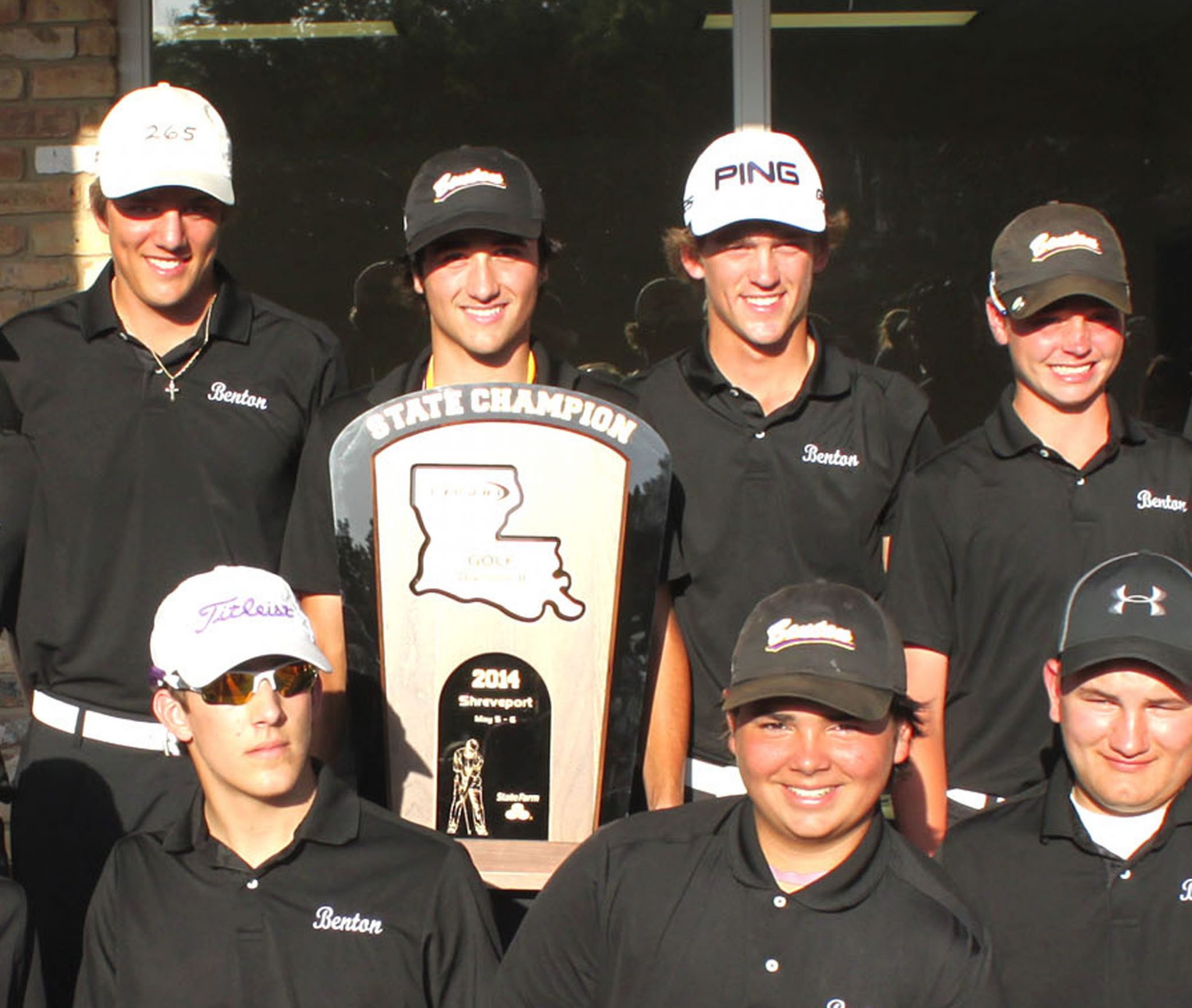 After Benton players Colton Ryan, Shane Cram and Corbin Cantrell posted scores significantly better than their first-round scores Tuesday afternoon, the writing was literally on the wall at Huntington Park Golf Course.
Benton was well on its way to winning its third consecutive Division II state championship.
The Tigers were dressed in Tuesday black. And before Benton’s fourth player finished his round, the players who had finished or who were just there for support were pumping their fists and smiling.
That’s because they heard teammate David Cole, the first-round leader, was 3-under par after holing a 45-yard chip shot for eagle on the 14th hole.
Cole finished with an even-par  72 to go with his first-round 2-under 70. That was good enough to give him the individual title by a stroke over North DeSoto’s Matt Ramsey and Benton the team title by 30 strokes over St. Louis of Lake Charles.
Benton, which led North DeSoto by 12 strokes after Monday’s 308 first round, shot a 14-over 302 Tuesday and finished at 610.
Benton’s Jacob Wyatt, the District 1-3A champion, didn’t have his best round Tuesday, but his 76-79—155 was good enough for fifth place.
Cram shot a 76 to go with his first-round 82. Cantrell and Ryan both improved their scores by four strokes. Cantrell shot 80-76 and Ryan 82-78.
Even before they reached high school, juniors Cram, Cantrell and Wyatt had visions of multiple titles.
“We had it set in our minds in middle school to come here and win four in a row,  to be a kind of dynasty team,” said Cram, son of Benton coach Tim Cram. “Now we have to take care of business next year.”
Shane Cram said that the players knew they could win with just a “decent” second round, but they wanted to do more than that Tuesday.
“We wanted to try to break 300 and go pretty low,” he said. “ We weren’t able to do that, but we got the job done.”
The Tigers saved their best golf for the second round for the third straight year.
“It says a lot about their character, stepping up when they needed too,” Tim Cram said.
Cram added that depth has been the key to all three titles.
“All the teams have one or two, sometimes even three good players,” he said. “But you look at it and our No. 4 player won the tournament.”
Cole, a sophomore, was part of the support group when the Tigers won the title last year.
He said it’s obviously sweeter to be a major part of it this year.
After shooting a 91 in regionals at Links on the Bayou in Alexandria last week, Cole said he was determined to do much better at state.
“I was really angry about that score,” he said.  “I started practicing every day and every night until the state tournament.”
Cole said “pretty much everything” about his game was in sync Monday and Tuesday.
“My putting — I’ve always struggled with it —but my putting was on,” he said. “I was two-putting every hole almost. I straightened my driver and I was hitting my irons good too. So I was hitting everything on point.”
On 18, with the one stroke lead over Ramsey, Cole drove it straight down the middle. His approach was just off the green about 12 feet from the hole. He chipped within a foot and calmly made par after Ramsey missed his birdie putt.