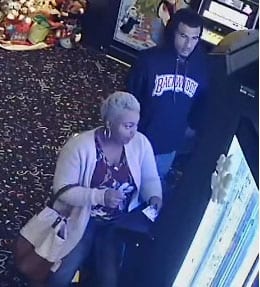 The Bossier Sheriff’s Office is asking the public’s help in identifying two suspects who stole a cell phone at a truck stop casino a week ago.

Surveillance video at the Red River South Casino shows two suspects picking up a cell phone around 8:51 p.m. on Dec. 9 that another person accidentally left at one of the casino machines.

When Bossier detectives reviewed the surveillance video, they noticed the suspects spotted the phone, checked the area, and then pocketed the phone when they think no one is looking. The rightful owner of the phone was still in the truck stop casino, which has about 10 people, and began looking everywhere in the casino for the phone. The female suspect continued to gamble while watching the man look for his phone. The victim even questions the lady to see if she has seen the phone, and the female suspect looks the man in the face and lies to him when asked if she has seen his phone. The victim also questions the male suspect friend with no help.

The suspects depart the casino and drive off southbound on Highway 71 in what appears to be a dark-colored, 4-door, 2012 Ford F-150, bearing a La. License plate VVG465.  While that would be easy for detectives to track down, the unfortunate thing is the plate on the truck comes back to back to a yellow Ford Mustang.  The truck also had what appeared to be an overturned washing machine in the back.

Detectives are asking anyone who may know the identity of the two suspects to contact Bossier CrimeStoppers at (318) 424-4100.