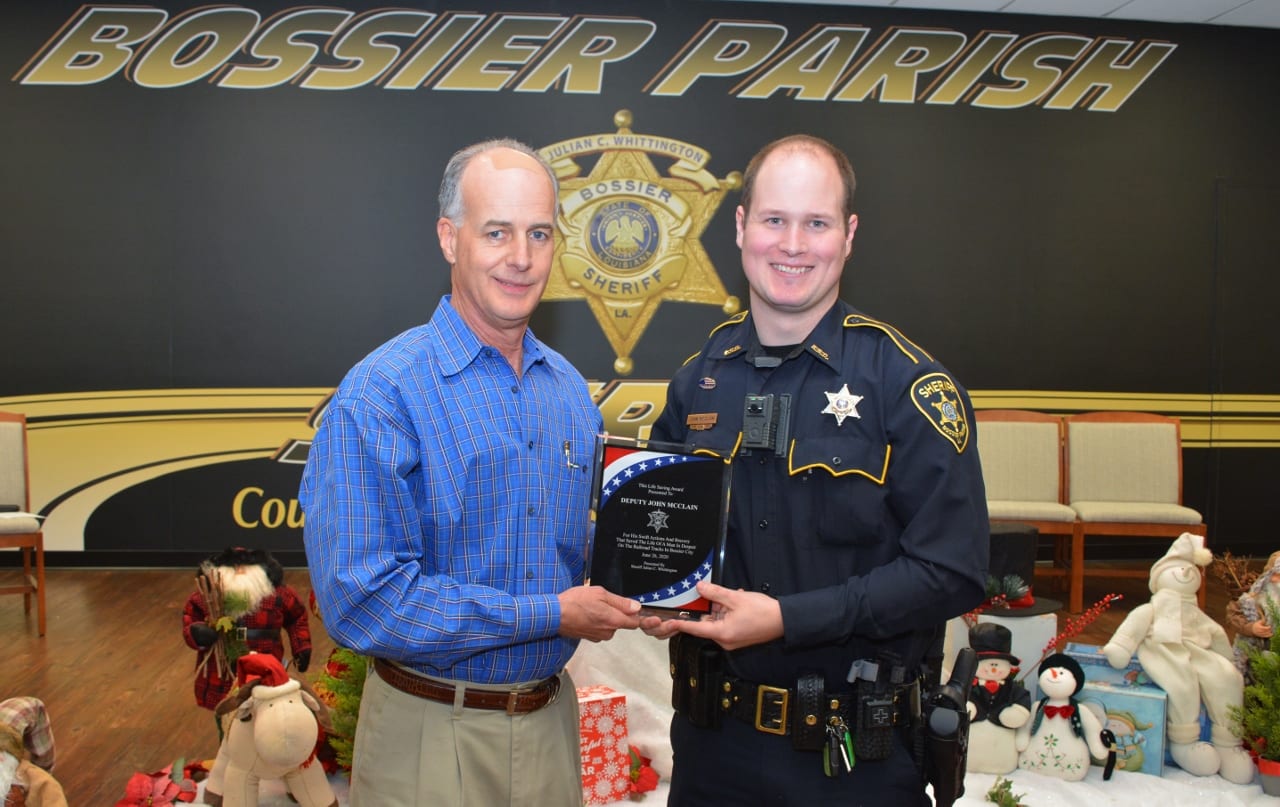 Bossier Sheriff Julian Whittington presented Dep. John McClain of the Bossier Sheriff’s Office with a Life Saving Award at the recent Christmas Awards Banquet in December. His quick actions saved the life of a man from being hit by a train in Bossier City.

Deputy John McClain – yep, with the same name as the hero in the “Die Hard” movie series played by Bruce Willis, doesn’t see himself as a hero…but what he did would certainly put him in the class of heroic acts.

Dep. McClain had just graduated from the Bossier Parish Sheriff’s Training Academy and was finishing his final week of Correctional Academy as he was heading to work around 6:30 a.m. on Friday, June 26, heading north on Barksdale Blvd.  While he was driving his personal vehicle, he noticed a train heading in the same direction.

“I was going about 45 miles per hour and I was able to pass the train which I think was going about 35 miles per hour,” McClain recalled.  As he noticed the train, John said he began to think about how someone committed suicide by train a couple of months ago. “I think that played a part in being in me being extra observant about the train tracks and people trying to do that,” he said.

McClain said when he approached the traffic lights near Cascio’s Food Mart about one-quarter mile from I-20, he noticed a young man sitting near the tracks.  He was facing the train, and it headed north parallel to Barksdale Blvd.  John said he could not actually see if the man was actually on the tracks, but what he saw was enough to alert him.  McClain, who just graduated from the police academy, said this is where his training began to kick in.

He said he parked his truck on the side of the road, put his flashers on, and immediately got out of the truck and headed over to talk with the young man, who was sitting in the middle of the train tracks.  “I tried talking to him, but he didn’t respond,” McClain said. The train was steadily heading their way, and John knew he had to do something quickly…or else.

“I had only had like three to five seconds to act, so I grabbed him by his armpits and just pulled him out of the way of the train.”  Within seconds, the KCS train passed them both.  John’s quick action saved the life of this young man.  He took the man to his nearby home and contacted the Bossier City Police Department to report the incident.

And for this heroic stop, John was now late for class.  But the training leadership was elated that Dep. McClain made that decision to help another human…and save his life.

“His actions may have surprised him, but they did not surprise me,” said Captain Sarah Rhodes, BPSTA director. “He has been a standup person since day one of training. And I believe I’m not even sure that John McClain would have acted any differently had he not been in law enforcement.”

John says his heart was racing and that he was nervous that he wasn’t going to beat the train. The image of what could have happened he says wasn’t a pretty sight. He was just glad he was in the right place at the right time to save a man’s life. “Just very thankful to God I was there in time to help him.”