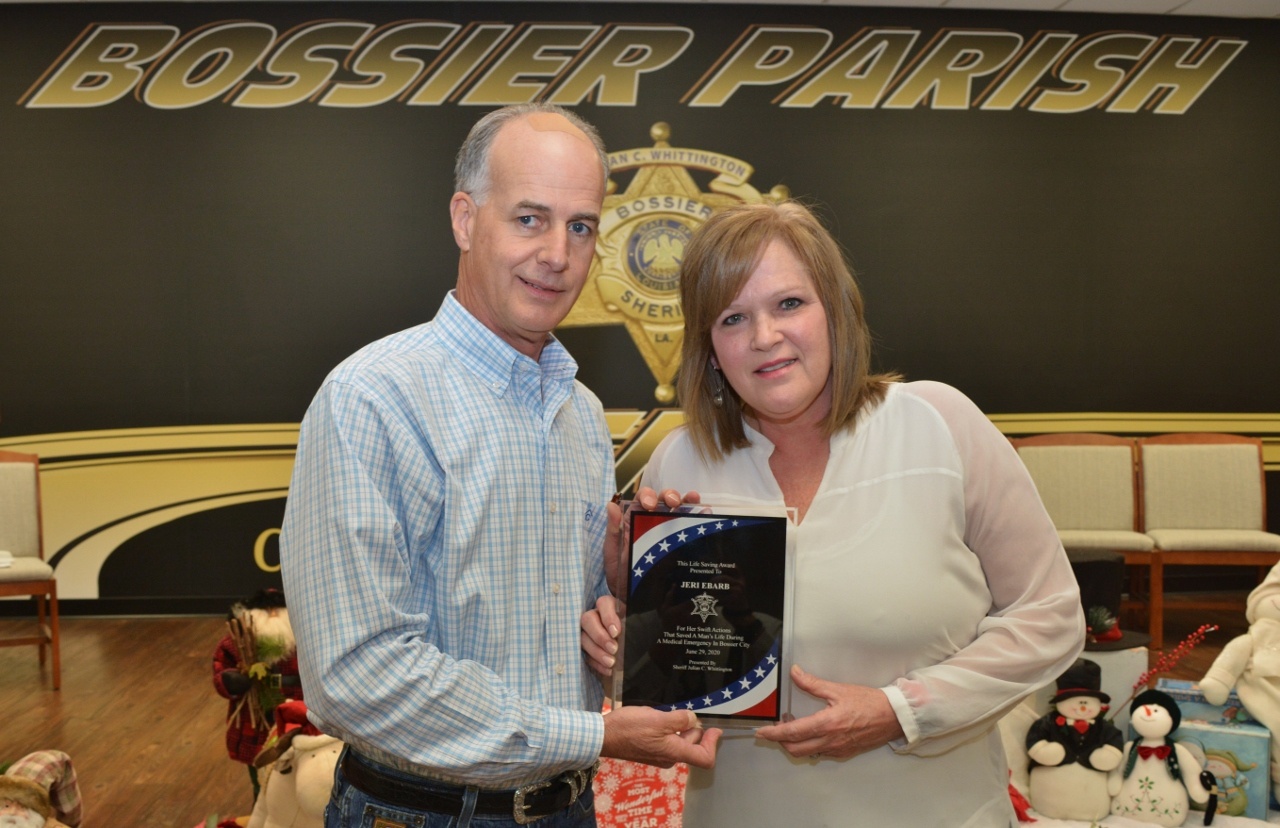 Bossier Sheriff Julian Whittington presented Jeri Ebarb, wife of Dep. Greg Ebarb, with a Life Saving Award at the recent Bossier Sheriff’s Office Christmas Awards Banquet in December. Her quick actions saved the life of a family friend who was having a heart attack.

The calling of a healthcare provider can come at any time. For Jeri Ebarb, it came one evening just in time to save a loved one’s life.

Back on June 29 at 10 p.m., Jeri, who is the wife of Bossier Sheriff’s Deputy Greg Ebarb and a nurse for the Willis Knighton Heath System, was called to her mother’s home on Lake Bistineau to take the blood pressure of her mother’s boyfriend, Carl Williams. He said he wasn’t feeling particularly well that evening.

“I was sweating, I couldn’t sleep, and my heart was palpitating,” said Williams. Jeri, who lives six doors down, drove to her mother’s home expecting only to check his blood pressure and his vitals. But all that changed when she took one look at him.

“When I got to the house, I looked at Carl, and I immediately told him to get into the car, I am taking you to the hospital,” Jeri exclaimed! Jeri put Williams into her car and headed north on Highway 71. She was taking him to the emergency room at Willis Knighton Pierremont, the closest hospital in the area. While heading to the hospital, Mr. Williams had his first heart attack…in the car. Jeri says that’s when her training kicked in.

“All I can do in that moment while I was driving was to beat on his chest while I drove to the hospital,” Jeri said. Knowing she was too far away to get him to hospital in time, she stopped at the safest place possible to get some help. She pulled into the parking lot of Red River South Travel Center. Three men from the store got Carl out of the car, onto the ground where she began to administer CPR. Jeri said they took turns giving Carl chest compressions for the next 20-30 minutes until EMS arrived.

“She kept me alive and I am indebted to her for the rest of my life,” Mr. Williams said. He says the thing he remembers from that night is Jeri telling him to get into the car to go to the hospital, fidgeting with the seatbelt and air vent in the car. “I guess I died in the car because when I woke up the next day in the hospital the doctor told me it is a miracle that I’m still alive.” I do not remember Jeri or the men giving me CPR. I guess that’s why my chest is sore, but I’m not complaining.” He believes without Jeri’s quick action and the help of the other men that he would not be here today.

After EMS arrived Mr. Williams coded again in the ambulance, but they had further equipment to save his life. Mr. Williams was evaluated later that month by doctors to see the next level of treatment he will need.