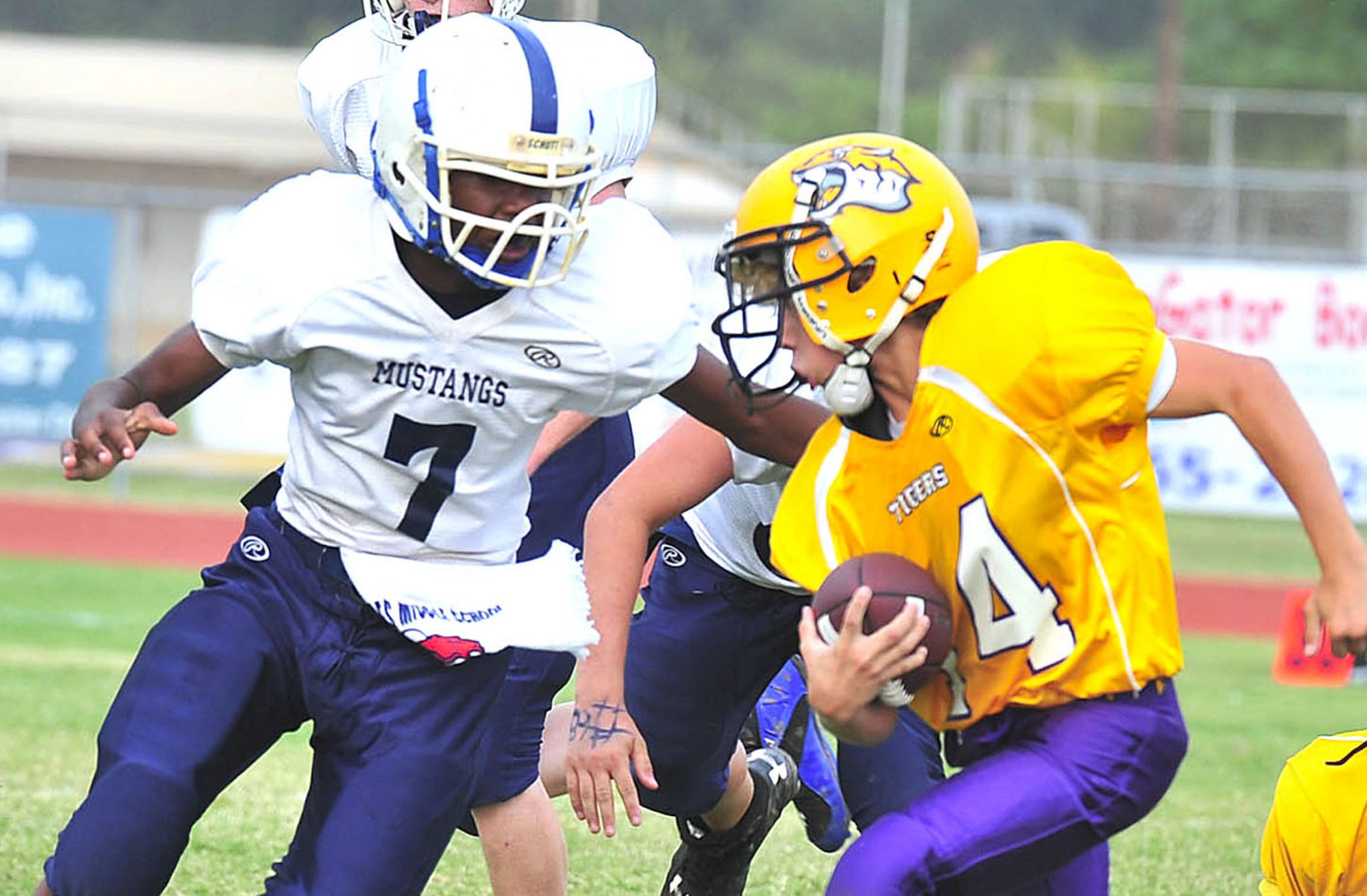 In eighth-grade action, the Cope Cougars edged the Elm Grove Eagles 14-6 at Airline, the Benton Tigers downed the Greenacres Mustangs 24-14 at Benton, and the Haughton Bucs defeated the Rusheon Rams 34-6 at Bossier’s Memorial Stadium.

The seventh-grade results were just the opposite.

Here are recaps of the eighth-grade games.

Cope 14, Elm Grove 6: The Cougars drove 75 yards in the final quarter for the game- winning touchdowns.

Cope converted a fourth-and-4 from its 39 on a fake punt with Jaylon Thomas gaining 26 yards.

Davis, who had a 70-yard touchdown run earlier in the second half, dragged several Elm Grove defenders into the end zone.

Thomas, who gained 48 yards on six carries, scored the conversion.

Kobe Johnson had an 11-yard run just before Davis’ final touchdown. He had 29 yards on six carries.

Cope coaches cited safeties Johnson and Darrell Evans for their efforts. Nolan Raybon forced a fumble and recovered it to stop an Elm Grove drive in Cope territory.

Korbin Schmidt was 3-for-4 on PATs. .Joey Cook recovered a fumble and played well on defense along with Christian Chavis and Harrison Voigt, coach Darin Walker said.

Benton 24, Greenacres 14: Garret Hable passed for two touchdowns and ran for another to lead the Tigers to the victory.

Jermaine Newton’s 37-yard run set up the Tigers’ first touchdown, a 21-yard pass from Hable to Doyle Adams. Hable passed to Newton for the conversion.

Hable scrambled 32 yards for the Tigers’ final touchdown and again scored the conversion.

The Tigers pulled off a 35-yard gain on a flea flicker. Hable lined up at receiver, came back, took the lateral and hit Randle, who was stopped at the Mustangs 9.

Greenacres held, though, stopping the Tigers on the 1.

Coach Jared Stowell said TJ Anderson, who was returning from an injury, led the defense.

He also said CJ George had a good night with a couple of long receptions.

Greenacres 24, Benton 22, OT: Frederick Lemons scored three touchdowns, including one in overtime, to lift the Mustangs to the victory.

Lemons’ touchdowns in regulation came on runs of 7 and 8 yards.

Bubba Osby returned a punt for a touchdown for Benton. Ellis Cole got the conversion on the sweep.

Brad Fream hit Ethan Yarbrough with a 65-yard pass for the Tigers’ other touchdown in regulation.

Colt Horton scored in overtime, but the conversion try failed.

Larry had two TD runs of 30 yards and one of 60. All came on wham plays. Alec Crain returned a fumble for a touchdown.

Cope coach Daniel Turnbow said quarterbacks Garrison Wade and Michael Mosura both did a good job of running the offense.

He also cited the play of offensive linemen Dom Palmisano and Seth Hooker. Defensive back Bryson Dudensing and linebacker Dom Palmison were among the standouts on defense, Turnbow said.

Rusheon 26, Haughton 0: Jacoby Decker scored four touchdowns in the second half to lead the Rams to the victory.

Montrez Henderson had a two-point conversion.