What began as a traffic stop for speeding in the Dogwood subdivison this morning ended up as a three-hour manhunt and arrest of the passenger who had fled from Bossier deputies during the stop.

A Bossier Sheriff’s Office deputy initiated a traffic stop near the tennis courts on Dogwood Trail in the Haughton neighborhood around 8:30 a.m. Friday. The passenger in the vehicle, Marcus Harper, 36, of 2200 Shed Road in Bossier City, fled the scene while the deputy was talking with the driver. He jumped a fence in Dogwood South, jumped another fence and was soon out of the deputy’s sight.

Harper had provided his name and date of birth to the deputy, but he could not produce any identification. Deputies discovered Harper had a warrant out of Webster Parish and a lengthy criminal history. 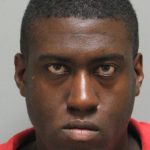 With Harper now on the loose in the populated Dogwood neighborhood, deputies became concerned for the safety of the residents, so they moved quickly to find Harper and bring him into custody. Harper had a cell phone on his person, so deputies thought he might try to make contact with someone to give him a ride out of the area.

Deputies set up a perimeter and began their search with aid of the K-9 team. Some parish workers who had heard about the search flagged down a deputy in the Stockwell neighborhood, and that’s when the deputy located Harper and made the arrest. He was taken into custody without incident on the corner of Applegate Cir. and Middle Creek Blvd. at 11:30 a.m. Friday morning less than half a mile from the location of the traffic stop.

The driver of the vehicle was cited for excessive speed, and Harper was transported to the Bossier Maximum Security Facility on the warrant charge and resisting an officer.