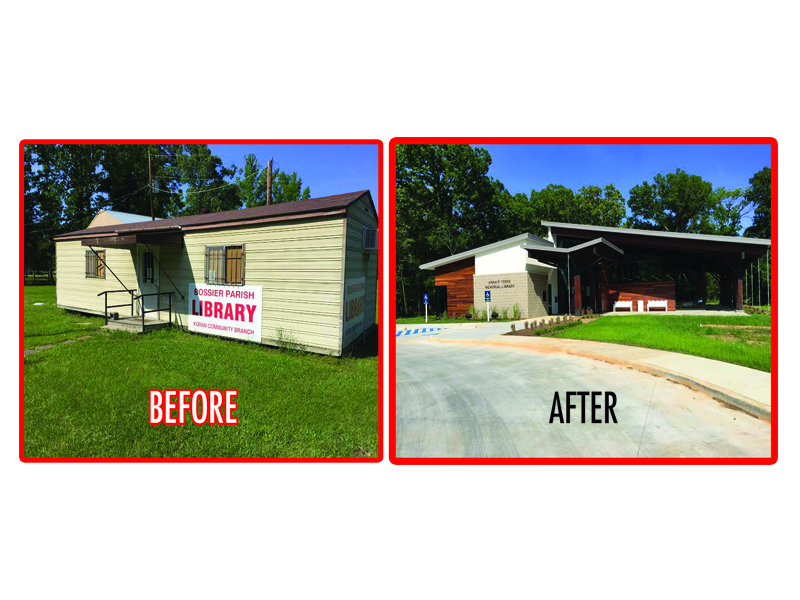 On three acres of land beside a quiet rural road in southern Bossier Parish sits the newest gem in the parish library system.

The Anna P. Tooke Memorial Library is already open to the public, but its amenities will be officially on display to patrons during a grand opening scheduled Thursday, May 14. Ceremonies at the facility on Fairview Point Road will begin at 10 a.m. In case of rain, the grand opening will be held Friday, May 15 at 10 a.m.

Officials were able to move forward with construction of the new library serving patrons in the Koran area when grandchildren of the late Anna Tooke donated three acres to the parish police jury. One of those grandchildren, Bob Brotherton, serves the area on the police jury.

“We had been wanting to build a new branch library in that area for some time. Land had been a major holdup and the donation from the family members got the project rolling,” said Bossier Parish Administrator Bill Altimus.

“There were six of us and it was an easy decision to give the land in memory of our grandmother,” Brotherton said. “She taught English and library science at Haughton for 36 years and we thought it was very appropriate for us to honor her in this way.”

Koran’s new facility is quite a change from previous libraries in the rural community. When Bossier Parish first opened the branch early in 1977, books were housed in a repurposed parish bookmobile that was no longer mobile, and had no heating or cooling system.

That stationary vehicle chasis served for years until the parish moved in a 12-foot by 40-foot portable utility building. The building did have heating and cooling systems, but there were neither restrooms nor running water. And, like the earlier version, space for books and other items was very limited.

Visitors to the new library won’t find a typical rural branch library. An architecturally modern building features hundreds of books and magazines of all genres and well-lighted reading areas. Six computer stations with new computers are available for individuals who want to spend time on-line.

And it’s outside where the Anna P. Tooke facility takes on a different persona than most libraries. A playground complete with equipment designed for youngsters is available for play during business hours (9 a.m. until 6 p.m., Monday through Friday) and a covered patio with all-new furniture adjoins the area.

Another unique feature of the library grounds is a quarter-mile concrete walking track that winds its way through the property.

“We thought the walking track and playground, along with the design of the building, would make this a family-oriented community center as well as a library,” Brotherton said. “It’s a very nice place for friends and family to get together.”