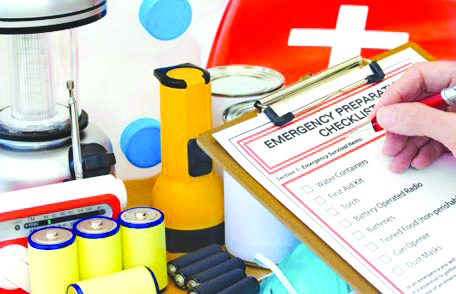 Every second counts during an emergency.

That’s why it is crucial to have a plan of action. National Preparedness Month, sponsored by the Federal Emergency Management Agency (FEMA), kicked off its nationwide program, hosted by the Ready Campaign, this month to encourage households, businesses and communities to prepare and plan for emergencies.

National Preparedness Month, which is held each September, is a time when FEMA advises the gathering supplies for an emergency kit and developing a family communication plan. They also encourage helping other by educating family, friends and neighbors on how to be prepared without key resources like electricity, water service, and access to a supermarket or even emergency responders for up to three days in the event of a serious emergency or natural disaster.

Mark Cooper, Senior Director of Global Emergency Management for Wal-Mart Stores, Inc., knows all too well the severity of natural disasters. Cooper, a graduate of Parkway High School, led Louisiana’s recovery efforts during Hurricanes Katrina and Rita as the Louisiana Executive Director of the Governor’s Office of Homeland Security and Emergency Preparedness (GOHSEP) and the State’s Homeland Security Advisor. He’s also responded to a number of other Federally-declared disasters, including Hurricanes Gustav and Ike in 2008, the British Petroleum (BP) Oil Spill in 2010, and historic flooding along the Mississippi River in 2011.

After witnessing the devastation from Hurricane Katrina, Cooper reached out to Wal-Mart and developed a preparedness campaign called ‘Get A Game Plan,’ a website (www.getagameplan.org) and smart phone app with step-by-step instructions for making storm and emergency preparation plans.

By the 2008 hurricane season, Cooper said the government and private citizens were better prepared.

“I became a big believer in the role that the private sector played in resiliency for communities,” he said, adding that it led him to a position with Wal-Mart.

Today, Cooper’s position at Wal-Mart is responsible for the company’s business continuity efforts, preparedness (including public/private partnerships, emergency response and operations, and recovery).  During his short time at Walmart, the company has responded to numerous disasters including Hurricanes Ike, Isaac, and Sandy.

“The three areas we focus on are the associates, operations and community. We have an all hazards philosophy approach, meaning hurricanes, tornados, winter storm or whatever comes,” Cooper said. “Our country has advanced a lot as far as government preparedness, but they can only do so much. It’s up to the individual families to do the other part of it. That’s why we feel like we can reach our customers by offering emergency preparation products and tools so they can be prepared.”

The first step in making an emergency preparedness plan, Cooper said, is visiting Ready.gov and the State of Louisiana’s website (www.getagameplan.org) to get information needed for making emergency kits as well as other vital information.

Most important, though, is not waiting until the last minute to stock up on food, water and emergency essentials.

“Next year marks the 10 year anniversary of Hurricane Katrina. Unfortunately, that’s what Louisiana remembers most as the biggest disaster,” Cooper said. “It has certainly good to be prepared and better to prepare for all hazards. Taking an all hazards approach is the best approach.”

Homeland Security promotes emergency preparedness all year round via the Ready America campaign. Checklists, brochures, and videos are available in English and in Spanish online and by phone (1-800-BE-READY and 1-888-SE-LISTO).