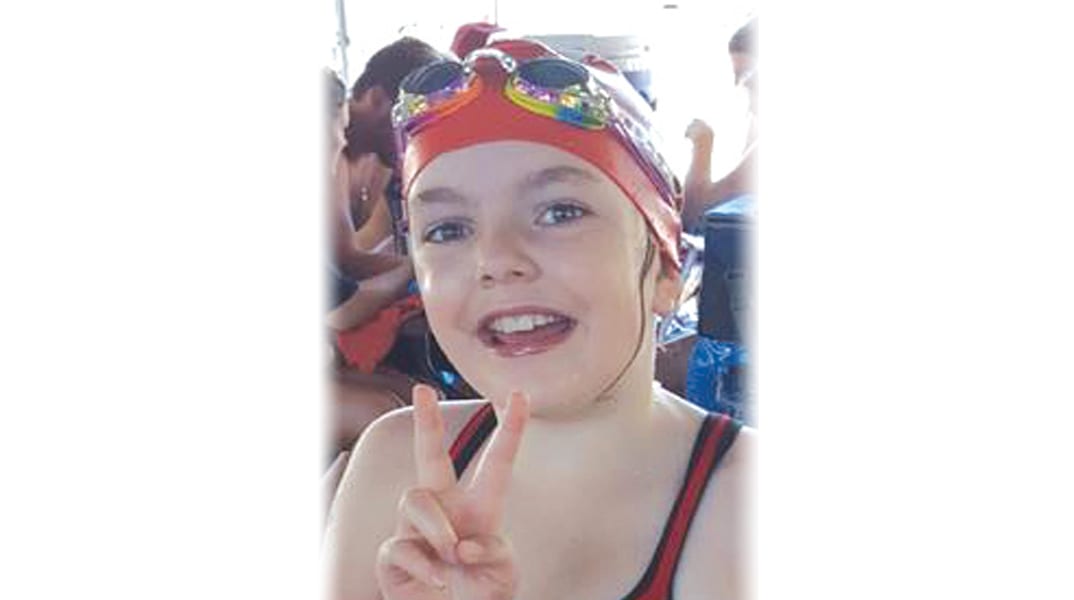 Trey and Candi Gibson were given the news no parent ever wants to hear.

Their nine-year-old daughter, Emilie, was diagnosed with a DIPG (Diffuse Intrinsic Pontine Glioma), a deadly brain tumor, in September. The prognosis was about as bad as it could be.

“Fifty percent of kids diagnosed don’t make it past nine months,” Trey said. “This type of cancer is a monster.”

Emilie, as described by her parents, is playful and kind of a goofball, often wearing bold colors and crazy patterns in public without the slightest hesitation.

“It’s a little crazy sometimes, but it makes her happy,” Candi said.

She loves her older brother, Alex, and the family dog, Max. She’s also great at playing card games and strategizing.

Her passion, though, is swimming. Emilie took to the water early on. Her parents noticed a natural ability and comfort in the water before she turned two.

“She had never had a swimming lesson before. All of a sudden she just kicked and took off,” Trey said. “It’s almost zen for her when she’s in the water.”

Emilie joined a swim team last April and her parents were ecstatic to watch her do something she loved so much. Then she started having headaches in the water.

At first, they didn’t think too much of it. The headaches, however, kept coming. They took Emilie to see a neurologist. An MRI later and she was in the hospital.

Diffuse Intrinsic Pontine Gliomas are the most common brainstem tumors in children and they are one of the most challenging tumors to treat. Radiation temporarily shrinks the tumor and gives a temporary reprieve, but studies show the tumor comes back, more aggressive than before.

Emilie has bravely faced two surgeries, completed 30 radiation treatments without sedation, and has a “just do it” attitude for the countless needle sticks she endures. Through it all, she continues to laugh, play and live a normal life as much as possible.

Although there is no cure, the Gibsons remain defiant. Emilie has received care at University Health in Shreveport, St. Jude and Le Bonheur in Memphis.  The Gibsons have also been researching different clinical trials. From San Francisco to London and everywhere in between, they will stop at nothing to find a way to save Emilie’s life.

“Her situation is so bad that we have one shot and one shot only at getting it right,” Trey said. “Our daughter’s life is hanging on the decision we make as her parents and we don’t have any time to waste.”

Emilie’s scans on Dec. 6 shows that her tumor has shrunk by more than 50 percent after 30 days of radiation. The Gibsons call it “a great victory” in this battle for her life.

The next step now is waiting to see if Emilie qualifies for any clinical trials.

“Last week was such a good week for our family after learning that Emilie’s tumor shrunk so much,” reads a post on the Friends of Emilie Gibson Facebook page. “We know this is the calm before the storm and that tumor can start back up at any moment. So, we are preparing for all options and keeping our eyes out for more.”

Trey and Candi say the hardest part is not having any control over what happens next.

“All we can do is get our ducks in a row and be prepared as best we can. We have to save our daughter’s life,” Trey said, wiping tears from his eyes. “We are defiant. She’s a fighter. We’re fighters. I want to share my daughter with the world.”

If Emilie does get accepted into a clinical trial, the Gibsons would be faced with paying for travel, hotel, food and any other expenses that come up. They have created a GoFundMe page to help cover those costs.

Most importantly, though, the family asks for prayers in the days and weeks ahead.

“We could never repay the generosity and love that we have received, but we thank you all from the bottom of our hearts and hope to pay it forward and help end all of childhood cancer one day,” the GoFundMe page says.

For more information, visit the ‘Friends of Emilie Gibson’ Facebook page or the GoFundMe page at www.gofundme.com/emilies-cure.