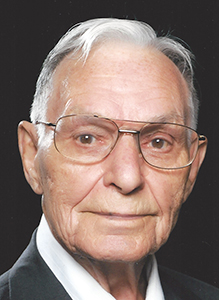 HAUGHTON – M/Sgt. Eugene A. Dumas (USAF Ret.), of Haughton, LA, passed away on June 23, 2013. He was born on October 10, 1914 to John C. and Rose Guilbeault Dumas in Gaastra, MI. He grew up in Duluth, MN. In September, 1930, Gene joined the US Naval Reserve and was called to active duty in 1940. During WWII he served in Cuba, several states-side naval bases and saw action during the invasion of the Philippine Islands. After the war, he spent several years with the VA until he returned to military service with the newly created US Air Force. Transferred to the Bossier-Shreveport area, he retired to inactive duty at the end of 1965 with over 32 years service. He held life memberships in the DAV and the VFW.

Gene was active as a volunteer with multiple credit unions, and was a founding member of Bossier Federal Credit Union. After his Air Force retirement he served Bossier FCU full time. During his 35 year long association with the credit union movement, he served in many volunteer positions as well as numerous appointed and elected managerial capacities. For many years, Gene operated Dumas TV Service in Shreveport, frequently donating his services to those served by the St. Vincent de Paul Society. He enjoyed tennis, chess and golfed at Eastland Golf course.

Since their arrival in the Shreveport-Bossier area in 1951, Gene and Marie have been active in St. Joseph, St. John Berchmans, Holy Trinity parishes, Loyola College Prep (formerly St. John’s/Jesuit High School) and St. Vincent Academy. They will be especially remembered for opening their home to hundreds each year to enjoy their Christmas garden and to recall and celebrate Christ’s birth. Gene is currently a member of Christ the King Parish.

He was preceded in death by his beloved and loving wife of 64 years, Marie J. Dumas, whom he married on Thanksgiving Day 1943 just prior to his deployment to the Pacific theater. His parents, and three brothers, Leslie, Francis and David Dumas had also passed away previously. He is survived by his loving son, Albert E. Dumas and wife Kathleen, devoted daughter, Cherie Breffeilh and husband George, and grandchildren: Jennifer Dumas, Christopher Dumas, Margaret Breffeilh Heeger and husband Chester, John Breffeilh, and Mary Breffeilh Kawooya and husband Brian, together with a number of cousins, nephews, and nieces.

Funeral services, coordinated by Osborn Funeral Home, will begin with a Requiem Mass celebrated by Father Joseph Howard at 10:00 am Saturday June 29th, at Christ the King Catholic Church, 425 McCormick St., Bossier City. Immediately after Mass, the family will receive guests and attendees in the school cafeteria until noon, and then the procession to Forest Park Cemetery, 3700 St. Vincent Avenue, Shreveport will immediately follow. Pallbearers will be Christopher Dumas, John Breffeilh, Chester Heeger, Brian Kawooya, Robert Henley and Jim Shaw.

In lieu of flowers, the family suggests donations to one of Gene’s favorite charities, Boys Town or St. Jude’s Hospital.